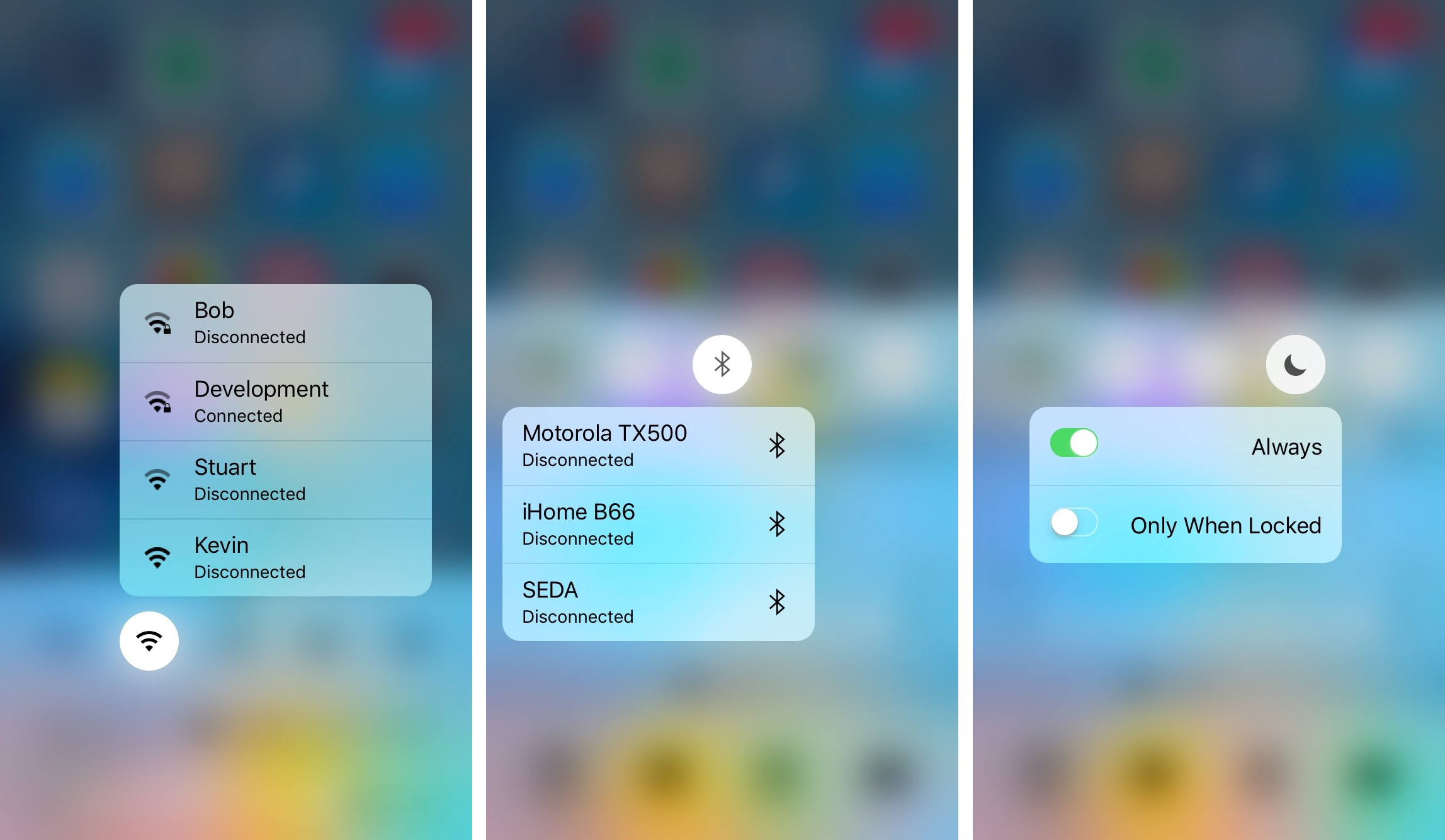 Control Center is one of the more useful parts of iOS where you can easily toggle on or off some of your most important features, and where you can access shortcuts to your device’s most useful utilitarian apps.

Unfortunately, Apple wasn’t thinking three-dimensionally when they launched the iPhone 6s and iPhone 6s Plus, and as a result, Control Center doesn’t take advantage of the 3D Touch display. That’s where a new jailbreak tweak release called QuickCenter, which can be had from Cydia for $0.99, comes to the rescue.

QuickCenter does what Apple failed to do the first time, and integrates 3D Touch into the Control Center interface. With it, you can use 3D Touch on the various toggle switches and even on the shortcut buttons to access menus full of Quick Actions.

Among the different things you can do include:

Here’s an example of the Camera view finder, which supports focus, resizing, and more all from within the view finder: 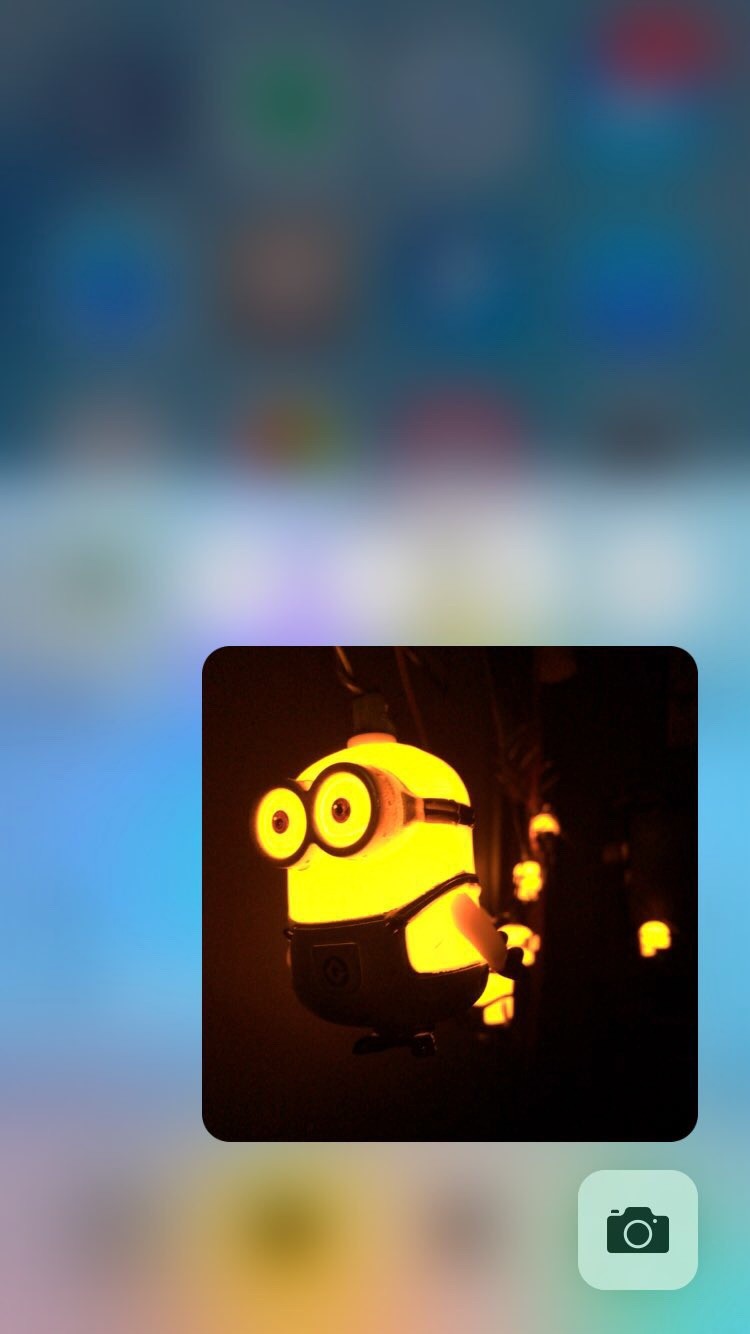 That’s not all either! The tweak fully supports Polus, which means if you have any Polus shortcuts, you can even use QuickCenter to use 3D Touch with those shortcuts too. QuickCenter also plays nicely with the following Control Center-modifying tweaks:

QuickCenter adds a preferences pane to the Settings app after you install it where you’ll be able to configure the tweak to your liking.

From the main preferences pane, you can enable or disable the tweak on demand, see a user guide, view information about the creators, and report any bugs that you find so the developers can work on fixes for them. You’ll also notice two major settings cells, entitled Configuration and Security. 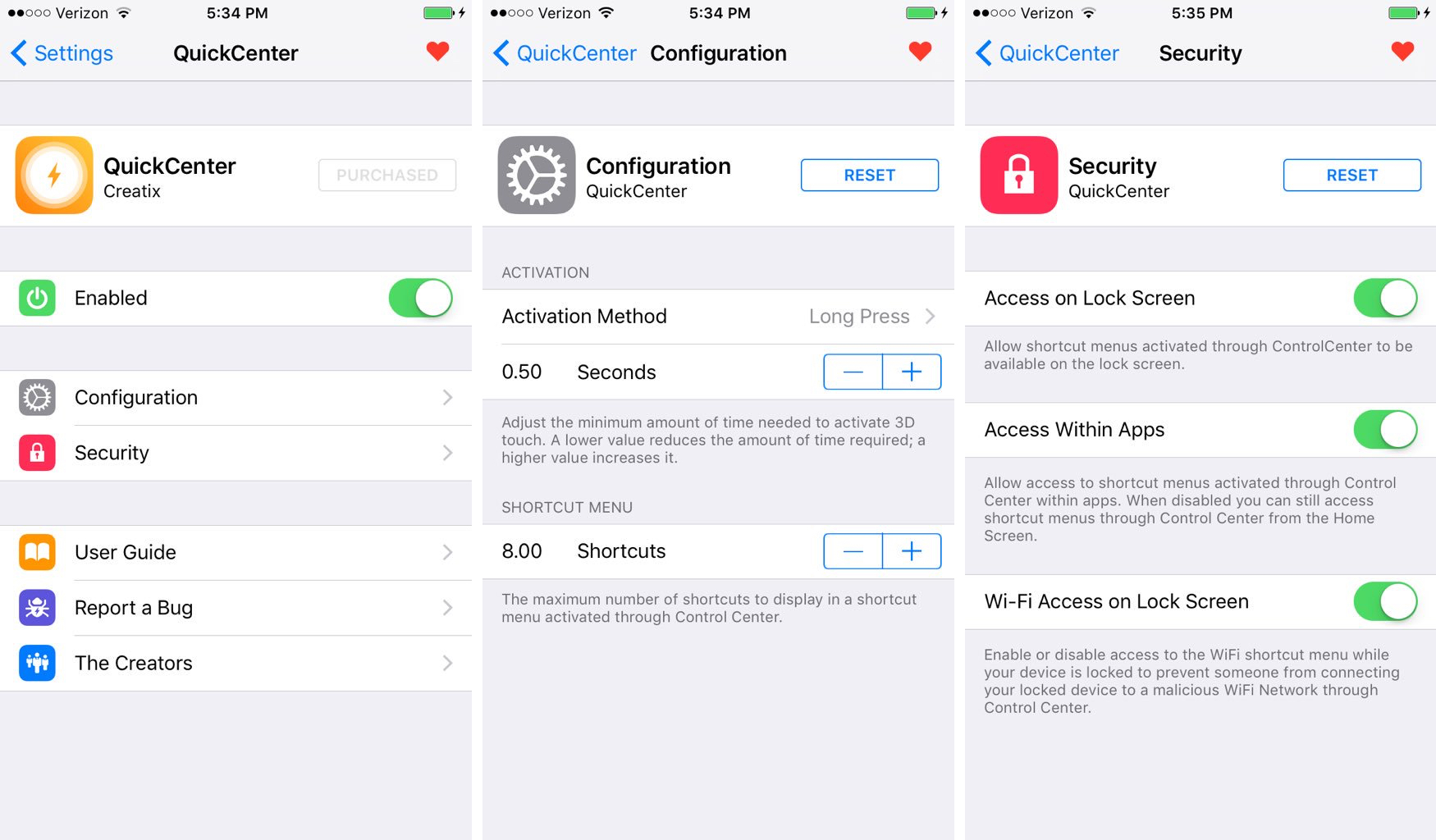 From the Configuration settings cell, you can configure any of the following options:

From the Security settings cell, you can configure any of the following options:

The last option we just mentioned there is quite important, as allowing anyone to switch your Wi-Fi network from the Lock screen while you’re not looking could land you on a potentially malicious network where your usage could be monitored and personal information could be stolen from you. So we recommend disallowing Wi-Fi access on the Lock screen for your security.

QuickCenter is a great addition for jailbroken devices whether you sport 3D Touch or not, because the tweak is built to support not only the 3D Touch display on the iPhone 6s and iPhone 6s Plus, but also tap and holds for devices that don’t have a 3D Touch display. This means even iPhone 6 and earlier users can enjoy QuickCenter too.

It extends upon the functionality of an existing part of iOS and it does so in an Apple-esque way without getting in the way of too much. The gestures are even Apple-like in that they take advantage of the under-used 3D Touch display system-wide.

The tweak’s functionality feels like it fills a missing void in Apple’s iOS operating system. I can definitely see Apple having an interest in implementing something like this in the future, because its implementation and usability are quite innovative to say the least.

QuickCenter is something I think Control Center aficionados are going to love. It’s nice to be able to access your switching options and shortcuts right from Control Center from anywhere, and with that in mind, if you asked me if spending the $0.99 for QuickCenter was worth it, I would say yes!

Related: This tweak lets you use 3D Touch to measure an object’s weight

What are your thoughts on QuickCenter? Let us know in the comments below!