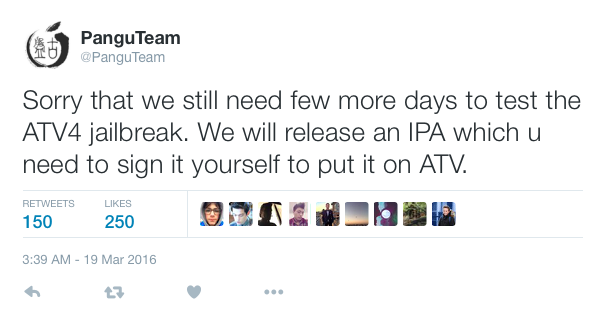 Following the Pangu Team’s announcement last week that the release of an Apple TV jailbreak was imminent, the group of hackers has now declared on Twitter Saturday morning that they will need a few more days of testing.

The Pangu Team has also clarified that they will release an .ipa file which users will first have to sign before putting it on their Apple TV. No other detail is known at this time.

As a reminder, the Pangu Team had previously stated that this jailbreak will only work on Apple TV running tvOS 9.0 or 9.0.1, and because it is impossible to upgrade, downgrade, or even restore to a specific software version, unless you own an Apple TV currently on tvOS 9.0 or 9.0.1, you will be incapable of jailbreaking the device.

Now of course, you could always go to your local Apple Store and look up the serial numbers of their Apple TVs on shelves and find one that was manufacturer before December 2015, before tvOS 9.1 was released.

The team of hackers had also made clear that this jailbreak might not be too interesting for end users, but is rather more geared towards developers and security researchers. That means that, in its infancy, this jailbreak may very well be useless for most end users.

As always, stay tuned to iDB as we’ll do our best to provide timely coverage of the release as well as a set of instructions on how to proceed with the jailbreak process.