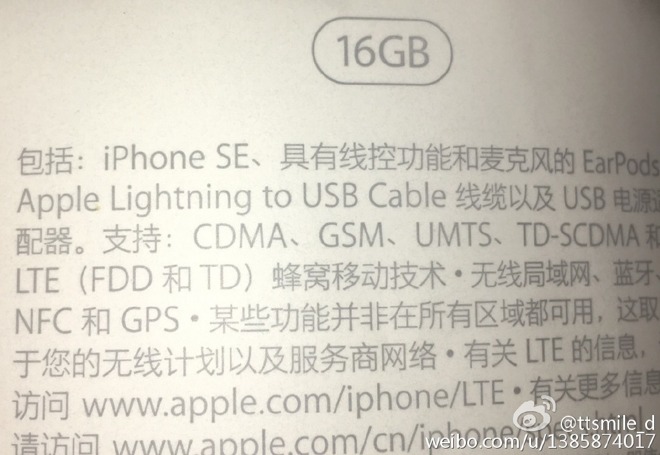 Thursday, a photo of what appears to be Chinese packaging for Apple’s upcoming four-inch iPhone refresh was posted on Chinese social network Weibo.

The image allegedly shows the specifications sticker affixed to the box for the upcoming device while specifically mentioning ‘iPhone SE’ branding.

The ’16GB’ label on the sticker suggests that the iPhone SE will start out at sixteen gigabytes of storage, just like current iPhone models do. Additionally, the technical specifications section mentions Apple Pay compatibility, meaning the iPhone SE will include NFC, like previously suspected.

“In separate posts, the leaker intimates that the iPhone SE will also be available in a 64-gigabyte configuration, with four color choices—presumably silver, space gray, gold and rose gold,” writes AppleInsider.

Apple’s older iPhones are typically offered in 16/64GB flavors, by the way.

Another thing we can glean from the packaging: the iPhone SE supports LTE on GSM and CDMA networks around the world and ships with a Lightning to USB cable and EarPods in the box.

Last but not least, the tipster claims that the iPhone SE resembles the iPhone 6s design. Conflicting rumors have suggested that the device might have either an iPhone 5s-style look or be based on the iPhone 6/6s industrial design.

It is also possible that the image has been photoshopped.

Apple sent out invites for their media event to be held on Monday, March 21. The press conference is said to reveal a completely new handset, the four-inch iPhone SE, in addition to a smaller 9.7-inch iPad Pro and potentially some new Apple Watch bands and updates to the OS X, iOS, tvOS and Watch OS operating systems.