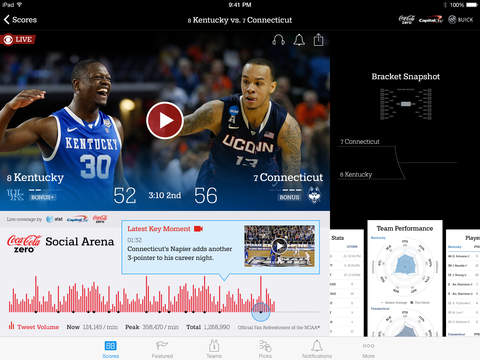 The National Collegiate Athletic Association (NCAA) announced that fans will be able to enjoy the NCAA Division I Men’s Basketball Championship tournament action across more places than ever before.

In addition, the app offers an exclusive Apple TV feature which permits fans to enjoy two live games at once with the split-screen feature.

Pay TV subscribers will have access to unlimited live streaming coverage, on-the-go access throughout the entire championship across online, mobile, tablets, set-top boxes and smart TVs, as well as access to live radio broadcasts for all 67 games.

For the NCAA Final Four National Semifinals on Saturday, April 2, the app will provide three live video streams: a live-stream of the traditional game coverage provided on TBS, along with “Team Stream by Bleacher Report” coverage or team-specific presentations offered via TNT and truTV.

Lastly, the upcoming tournament will include the National Championship airing on TBS, the first time the championship has ever been televised on cable television.