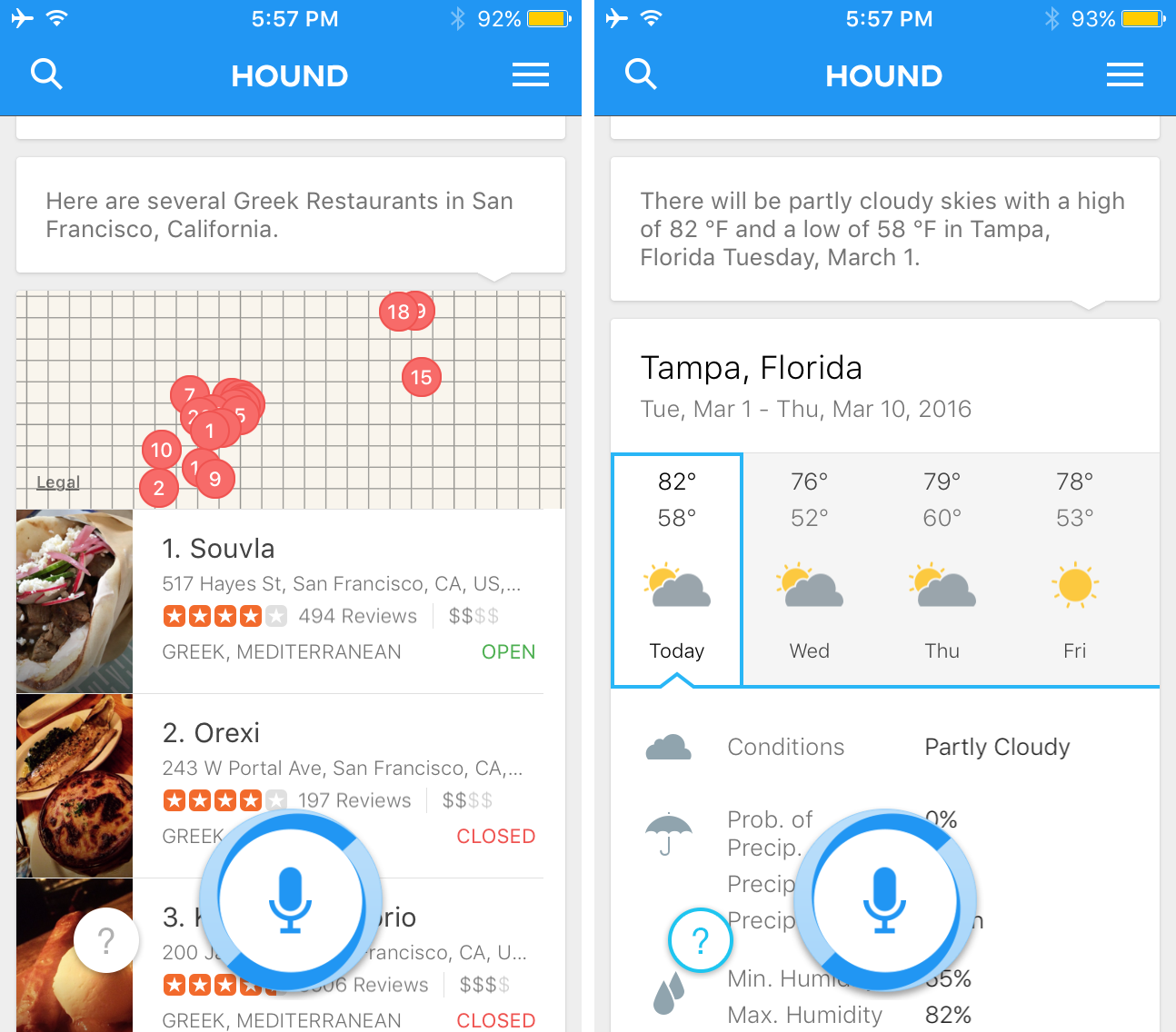 There are numerous companies competing to be the top dog in voice assistant software, but the makers of sound-tagging service SoundHound have made another alternative called Hound that promises an excellent voice assistant experience. Many initial reports suggest it’s even more capable than the voice assistants you’re used to using already, such as Siri, Google Now, and Cortana.

So just how capable is Hound? In this piece, we’ll walk you through the new free-to-download Hound voice assistant for iOS and find out if it’s as good as everyone says.

Hound: an alternative to other voice assistants

It seems like everyone’s trying to make a better voice assistant these days because that’s where we’re headed. The days of having to actually look at a screen and tap on results are slowly disappearing as we move to voice-based technologies that can activate with the sound of your voice and provide answers based on your vocal queries.

Hound is another take on the voice assistant race that aims to give users a new voice search experience; one where they aren’t going to have to memorize key words and can speak naturally as they would if they were talking to a person. Moreover, Hound promises ultra-fast search results and even allows you to continue to fine-tune queries as you ask questions with follow-up queries.

The strong points of Hound

One of the things worth pointing out about Hound is that it has a gorgeous user interface with bold color usage, a good flow of information with each query, and well-organized data so you know what you’re actually looking at when you receive an answer.

Hound supports a lot of useful queries you might ask throughout your day, and these include:

SoundHound integration means that you don’t particularly have to be in microphone distance of a catchy song to tag it; you can even hum a song that’s stuck in your head and Hound has a chance of being able to tag the song for you, which is better than Siri’s Shazam support, in which you must have the song playing in audible microphone distance for it to pick up.

Hound and Siri do a lot of the same things, but since Siri is still the operating system’s main voice control software, it’s going to have key functionality that an App Store app could never touch. For example, toggling system controls and being able to be accessed from anywhere in iOS are just two of many reasons why Siri will always out-shine App Store alternatives.

Moreover, without support for Wolfram Alpha, like Siri has, Hound is unable to process some questions and will have to searching the web for your own answers instead, which might not be as helpful for when you’re trying to do things without your hands. 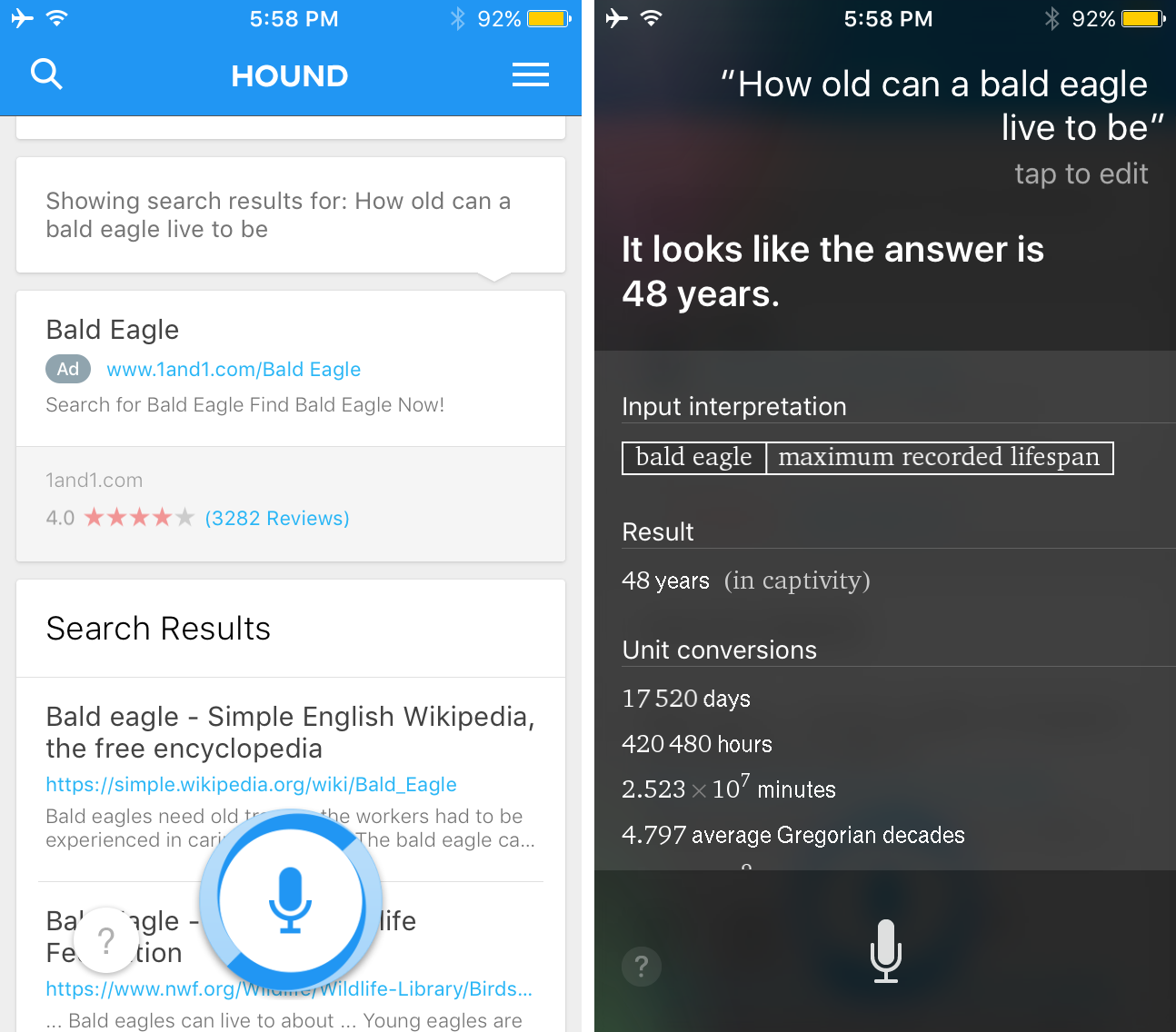 Although Hound supports “Hey Hound,” just like Siri’s “Hey Siri” feature, the downside is that the Hound app has to be open and in the foreground for this to be at all useful. Because Siri is a system service, you can access Siri from anywhere in iOS, whether you’re in an app already, on the Lock screen, or on the Home screen.

Hound is a great new voice assistant, and because it’s free in the App Store, we’d definitely recommend you try it out. With the fresh new user interface that telepathically screams ‘welcome to your new voice assistant’ and great voice recognition software that lets you talk normally, Hound offers a great competition for alternative voice assistants.

On the other hand, don’t expect Hound to be some incredible new replacement for Siri, because Siri still has more access rights to iOS than any App Store app will ever have.

What are your thoughts on Hound? Share in the comments below!