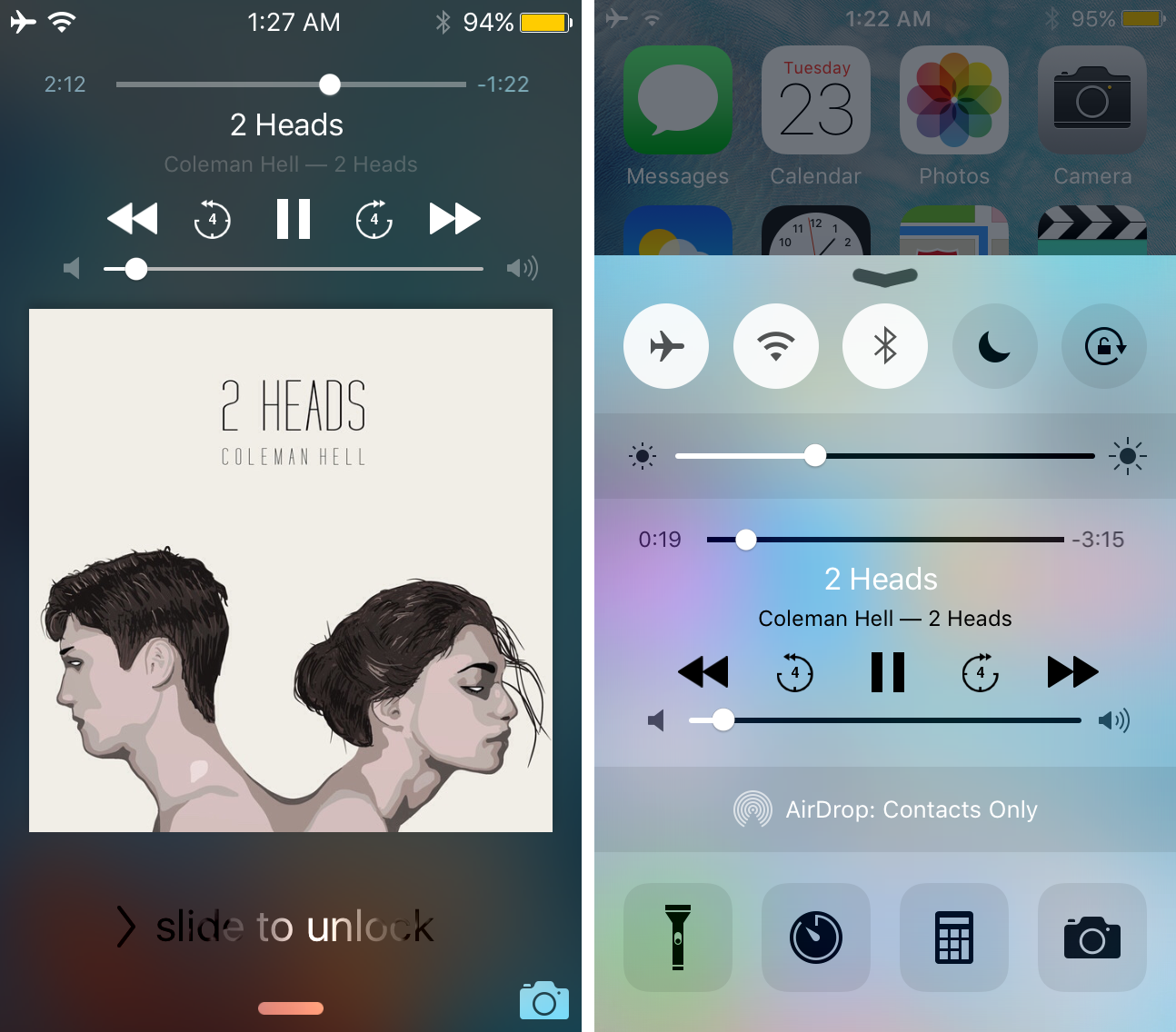 The music controls from the Lock screen and Control Center leave a lot to be desired, which is why iOS jailbreak tweak developer Ron Thakrar has launched an excellent extension for the music controls.

Dubbed Seeker, this extension for jailbroken devices brings an array of new features to the music controls in the aforementioned interfaces and can be had from Cydia’s BigBoss repository for the price of $2.99.

The basic iOS Lock screen and Control Center music control interfaces give users only a way to play or pause music, skip forward and back between tracks, or adjust the volume, but seeker builds on the interface that already exists.

For example, the tweak makes it possible to scrub through your currently-playing track right from Control Center or the Lock screen, and includes Podcast-like incremental seeking controls on either side of the pause/play button. Some of the more notable new features you can expect to enjoy from Seeker are provided below:

Live seeking: As you scrub through music using the Lock screen or Control Center, your song position moves and continues to play in real time without any pause in playing and without the need to lift your finger.

Fast forward and rewind: Not only are those next track and previous track buttons used for moving between songs, but you can now tap and hold on them to easily scrub forward or backward through a track. The longer you hold on a button, the faster the seeking will go.

Smart previews: If you’re doing a lot of seeking, Seeker has functionality built into it to predict where you’ll be stopping so that you have an idea of what part in the song you’re about to be listening to after you release your finger.

Smooth seeking enabled universally throughout iOS: Apple’s high-precision audio scrubbing is now enabled for the Lock screen and Control Center, as well as from the Music app itself.

Round seeker knob: Lets you change the ugly seeker bar into a knob similar to the one on the volume bar, which just seemed to make sense to have now that you can grab it and move it around.

Using volume buttons for quicker seeking: Optionally, you can also do quick volume button presses to seek through a song based on incremental movements.

After being installed, Seeker adds a preferences pane to the Settings app where you can toggle any of the just-discussed features on or off. You’ll also find some more features here that we haven’t yet discussed. 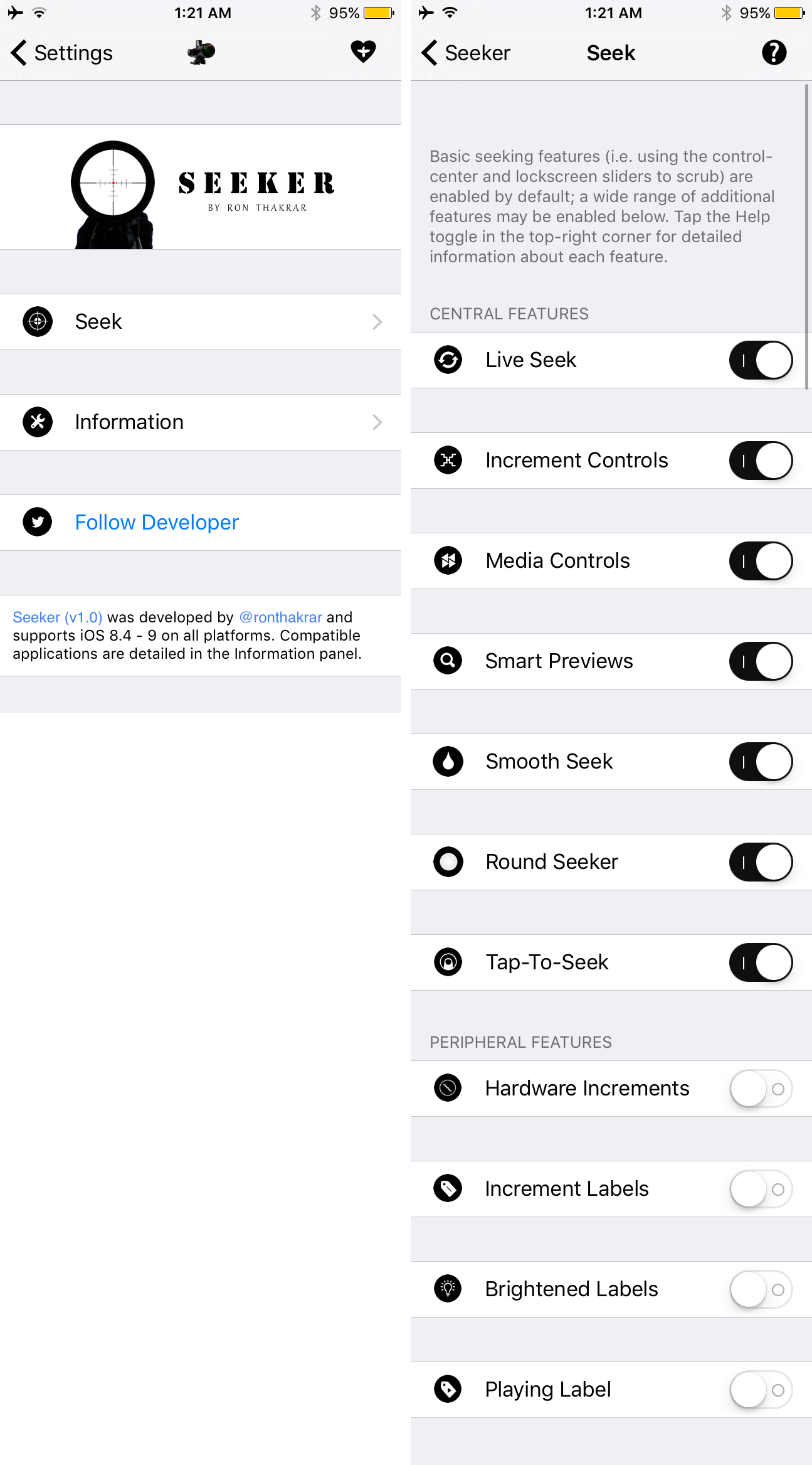 All of the things that can be enabled or disabled from this preferences pane include:

The developer has worked hard to make Seeker compatible with a wide variety of services, including third-party music apps and even other jailbreak tweaks.

If you’re wondering what other jailbreak tweaks Seeker will play nicely with, then check out the list below:

My thoughts on Seeker

Seeker provides a myriad of useful features to the Lock screen and Control Center music controls that would have been nice to have out of the box. But for whatever reason, Apple chooses to limit functionality where it doesn’t really need to be limited.

Seeker keeps as close to a factory look as possible while still integrating important functionality into these control interfaces. The tweak’s compatibility with third-party music apps, like Spotify, as well as a long list of other popular jailbreak tweaks, is a very big plus.

Moreover, I find that the additional fine-grained control over scrubbing makes it really easy to get to any point in a song you want to get to. I think this tweak is a great addition for anyone who listens to a lot of music and doesn’t want to have to launch the now-playing app every time they want to go backward or forward in the song.

To give your iPhone that extra music control that it needs all throughout iOS, Seeker is a great addition to any jailbroken device that’s used often for music playback. With it, you’ll never have problems replaying your favorite parts of songs ever again. You can grab it from Cydia right now for $2.99.

What are your thoughts on Seeker? Share in the comments below.