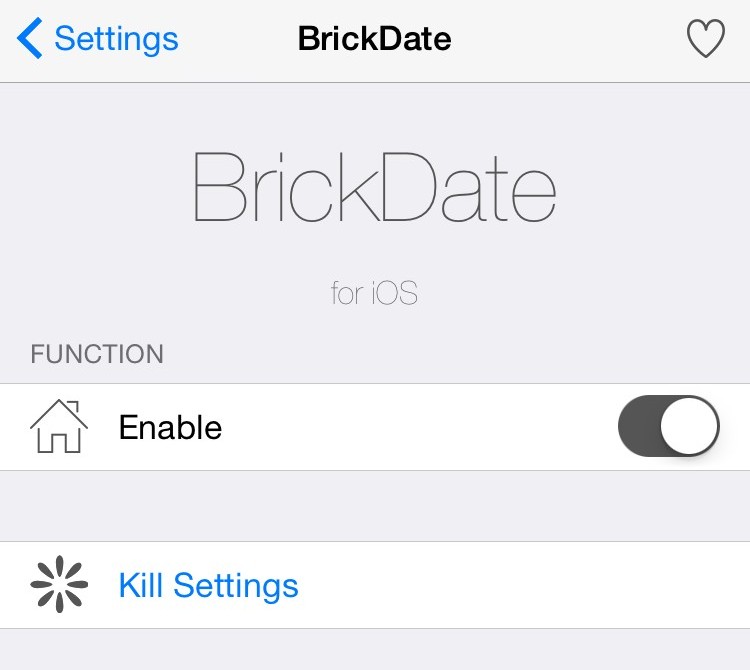 A recent bug discovered in the iOS firmware where setting your date back to a certain point in time could brick your device has been getting quite the coverage all across the internet as of late.

With so many people now having knowledge of the problem, the risk has never been greater than it is right now that someone with malicious intent could grab your iPhone while you’re not looking and set your date back to the dangerous date to brick your device on you.

Fortunately, a new free jailbreak tweak called BrickDate is available in Cydia that can protect you from having your date changed to the dangerous date.

BrickDate is a bricking prevention jailbreak tweak, and while we aren’t going to try changing our device’s date to the dangerous date known to brick 64-bit iOS devices for obvious reasons, we will vouch for the developer of the tweak and explain how this tweak works to protect you.

The tweak prevents your date and time from being manually set back to the dangerous date, which is January 1, 1970. The bricking would normally occur when your device is set to this time period, and then you attempt to reboot it, after which it will reportedly not turn back on. It’s also been said that even a DFU mode restore will not fix this problem.

By preventing your device from being set to this time, you effectively prevent the chance of your device being bricked by someone who wants to cause you some drama by setting your time back while you’re not looking.

Please note however that because this is a bug that we aren’t going to test on our own devices in the chance that it might brick them, we cannot confirm if this tweak actually works or not, so you’ll have to install it at your own risk. While we love to test things before condoning them, this is a tweak we physically cannot test without the risk of bricking one of our own devices.

Although a strong passcode and Touch ID work just as well to protect you from someone getting into your device and changing your date and time settings, not everyone uses these security features. Besides the point, it’s even possible that someone knows your passcode, so this is an extra step of security I would recommend you install even if you have a passcode.

Since jailbroken firmware cannot be updated to a later firmware without losing the jailbreak, if Apple were to release a fix for this problem by way of a future iOS update, then you wouldn’t be able to get it without losing your jailbreak. With that being said, having a hot fix available in Cydia to prevent the problem in the first place is a great idea so you can keep your jailbreak without updating.

One thing to note is that BrickDate only prevents the date and time settings from being changed by the user via the Settings app; it doesn’t protect you programmatically, which means that any kind of malware you might download and run on your device might still have the ability to change your date and time settings without your permission.

This bricking scare is something Apple will have to fix in a future software update, but if you’re jailbroken, you can still put up some walls of defense for yourself. BrickDate, which is a free download from Cydia’s BigBoss repository, is the first wall of defense against having your date changed to the dangerous date, January 1, 1970, and potentially having a bricked device the next time you boot it up.

What are your thought on the BrickDate jailbreak tweak? Share in the comments below.