Don’t you wish there was a hassle-free way to bring your Mac apps, documents, media, games and more to the big screen—and control them? Enter Remote Buddy, a sweet little app by Roth, Germany based developer Felix Schwarz.

This high-performance screen sharing software—along with its tvOS, watchOS and iOS apps—streams your Mac’s screen to the new Apple TV and turns the Siri Remote into a trackpad, a full virtual keyboard and an advanced remote so you can control Mac apps with gestures and shortcuts, without getting off that couch of yours.

Building on the latest GPU and CPU technologies, Remote Buddy uses a proprietary engine to deliver up to 60 frames per second with a latency of around 0.1 seconds so you really get a smooth, high-speed screen sharing experience.

Having taken Remote Buddy for a quick spin, I’m happy to report that it works incredibly well and really comes in handy when you want to do simple tasks on your desktop-bound Mac without actually sitting in front of your computer.

Getting started with Remote Buddy

Remote Buddy’s installer comes with a companion component, called Candelair, which is an alternative driver for a bunch of infrared remotes, including Apple Remotes. The Remote Buddy app itself is basically a server that sits in your Mac’s menu bar, letting you quickly access various settings and advanced features. 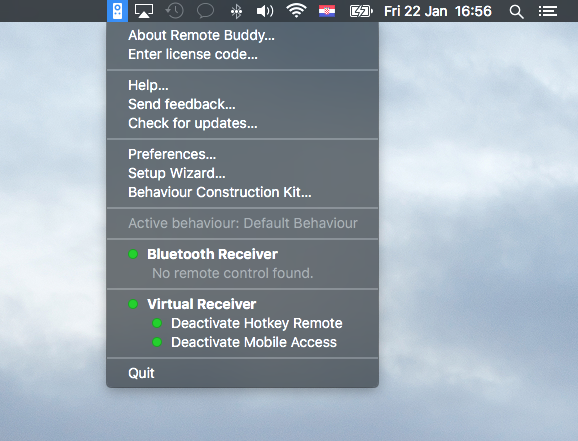 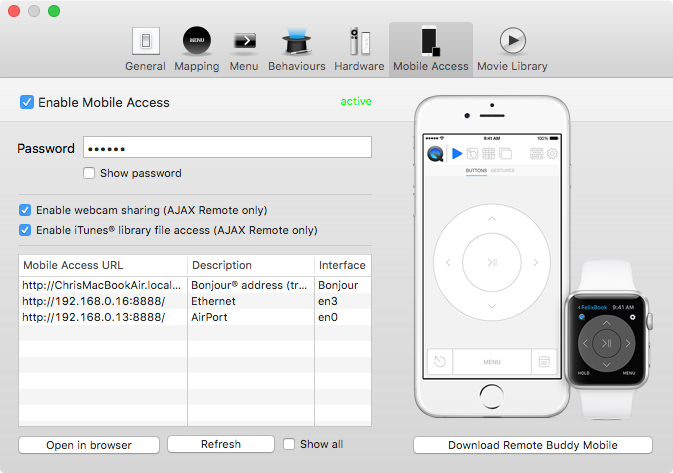 By the way, you cannot use the app without a password. Your Mac should now appear in the Remote Buddy Display interface running on your Apple TV, as shown below. 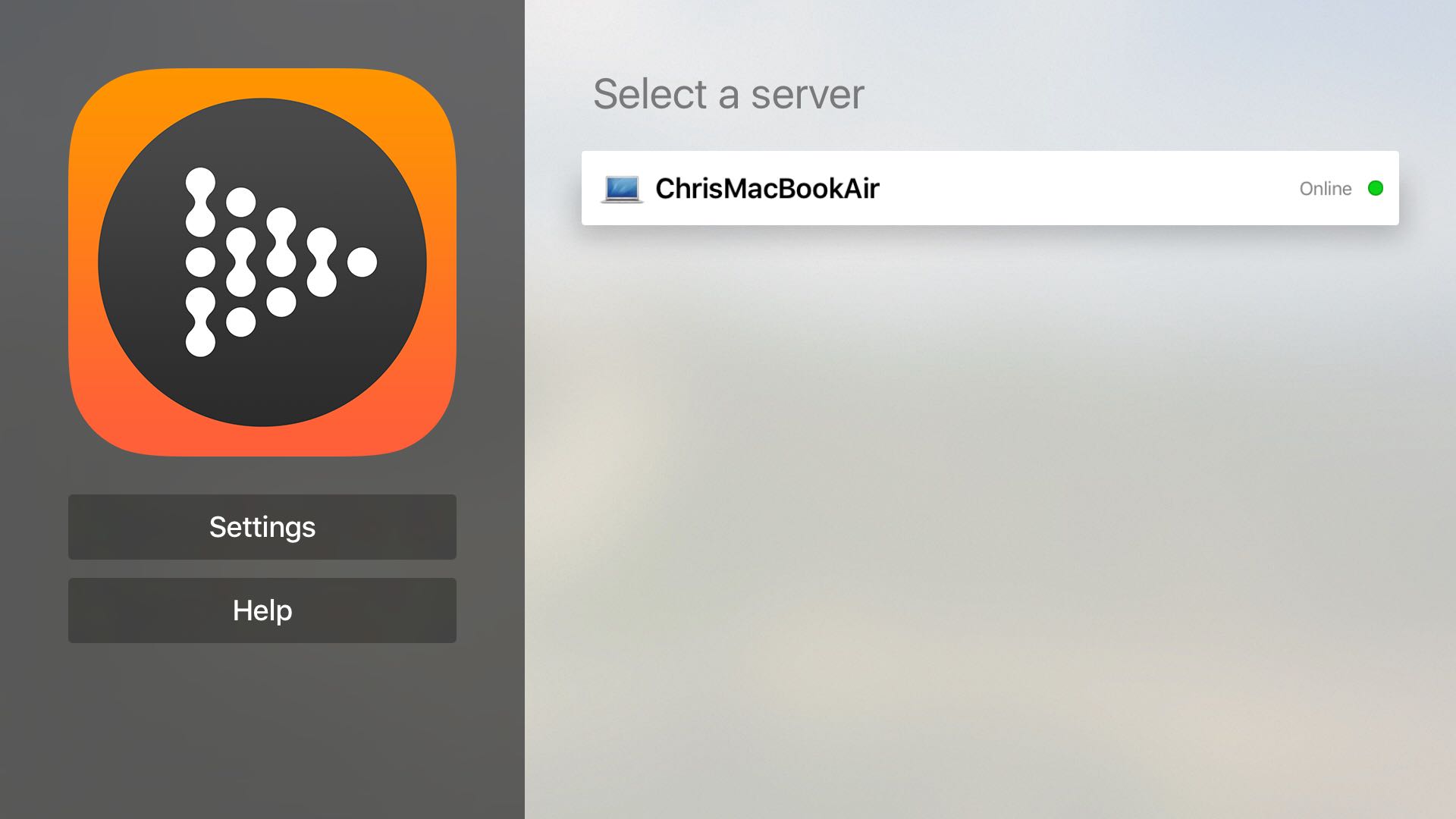 Simply select your computer, enter your previously created password and just like that, its display gets shown on your TV as if you were using AirPlay Mirroring. 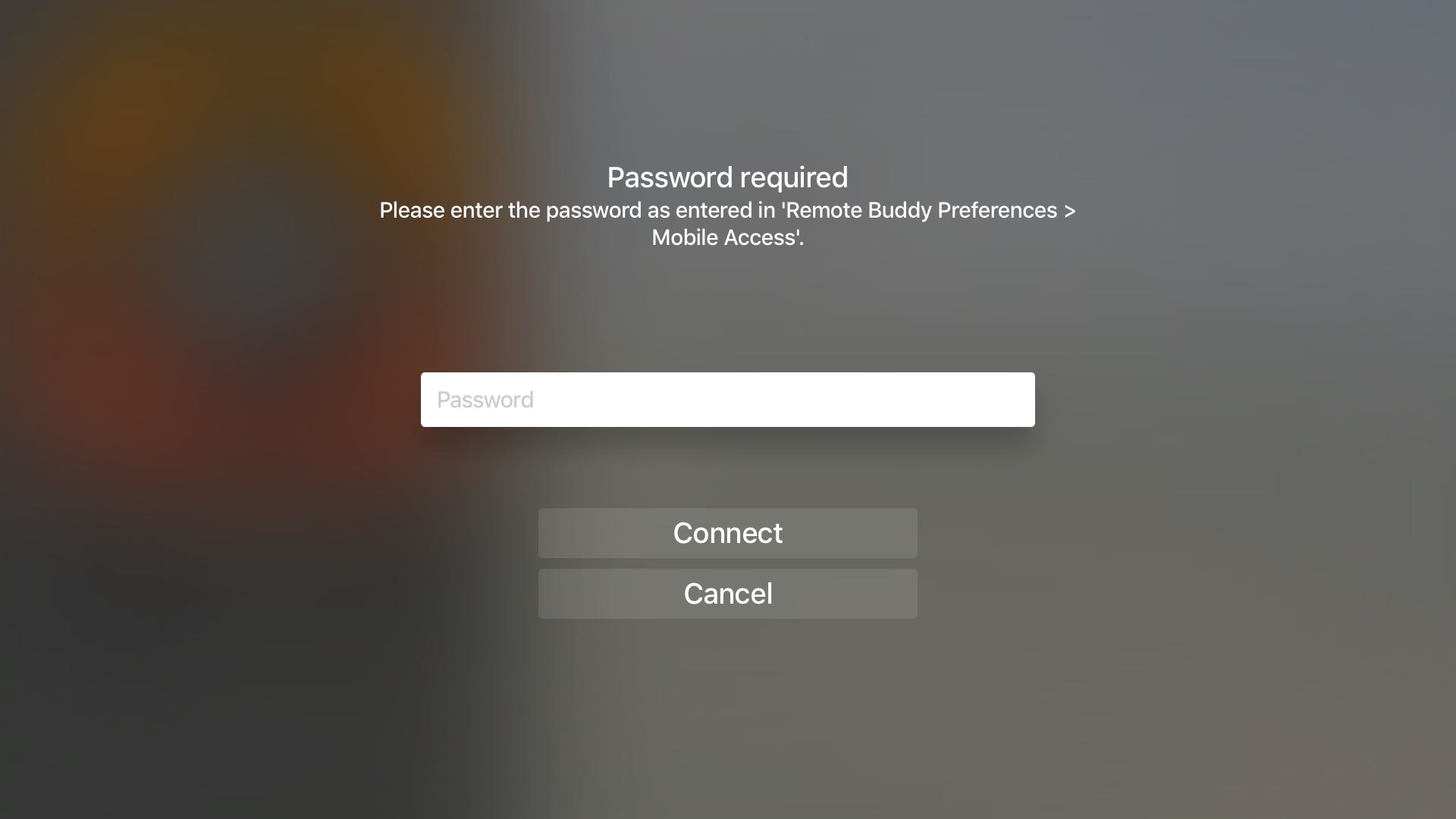 The Mac helper app serves as a conduit that sends everything displayed on your Mac’s screen as a compressed, live video feed to the Apple TV app. Here is my MacBook Air’s external 27-inch 2560-by-1440 resolution Thunderbolt Display, as shown wirelessly on my telly through my Apple TV. 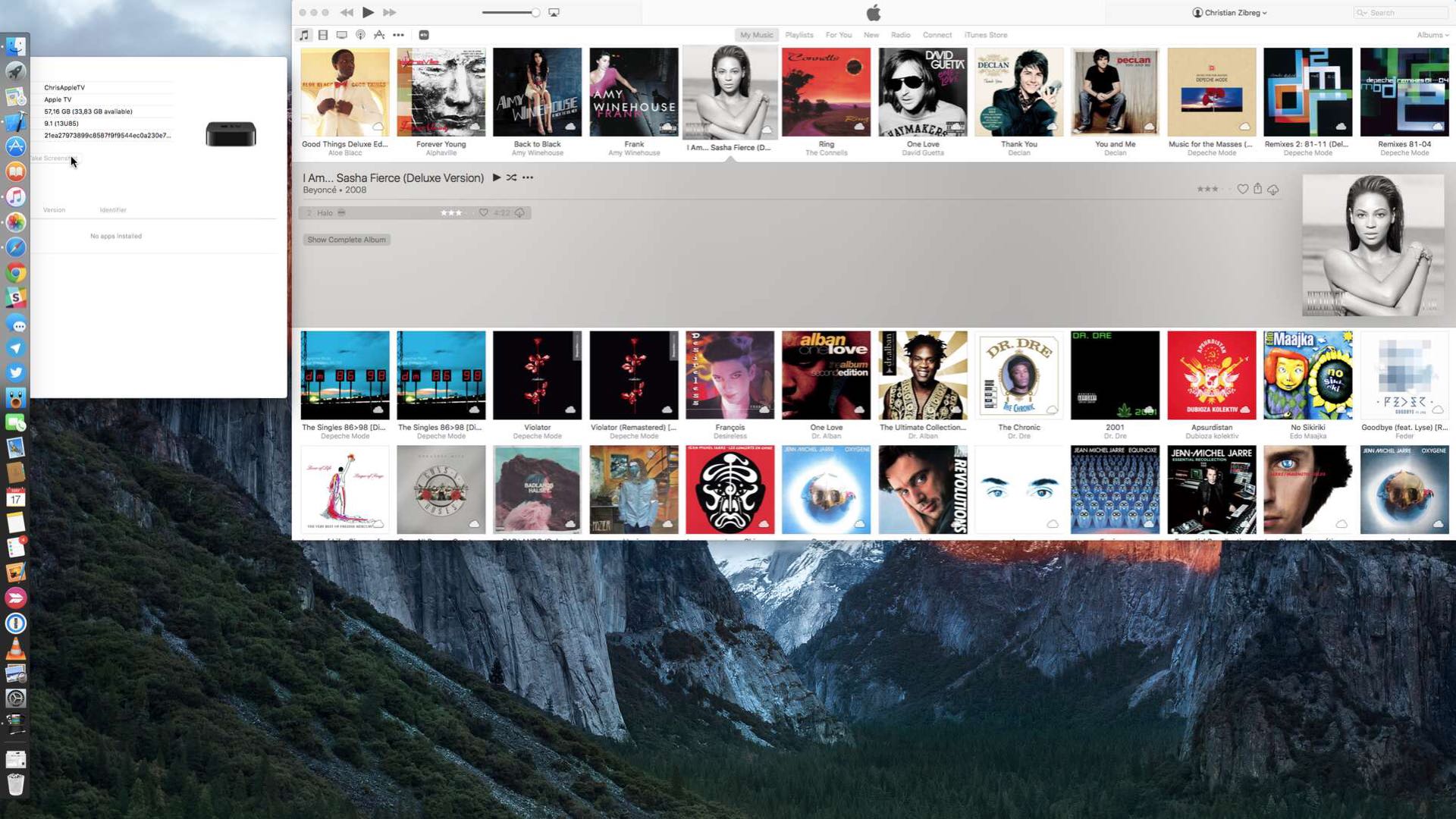 You might ask yourself, “How’s this different from OS X’s built-in AirPlay Mirroring?”

As I said before, the app running on an Apple TV includes advanced options for controlling Mac apps with your Siri Remote. With AirPlay Mirroring, built into iOS and OS X, you cannot control your Mac from another device.

I can use my Siri Remote’s Touch surface to control the Mac’s pointer with pinpoint accuracy, and click it to simulate the left mouse button. The full power of this app is revealed after pressing the Menu button to bring up an overlay with various controls.

These include: Remote, Trackpad, Keyboard, Help (instructions for using touchpad gestures on the Siri Remote), Behaviors, Actions, Power (sleep and shutdown options) and Logout (disconnects you from the Mac helper app).

When some text needs inputting, simply select the Keyboard option to bring up a full-size on-screen QWERTY keyboard with modifier and cursor keys. Using my Siri Remote, I can easily enter, say, a query into iTunes’ search field.

There’s even a handy numeric keypad for entering stuff like phone and channel numbers, typing out calculations in spreadsheet apps and so forth. 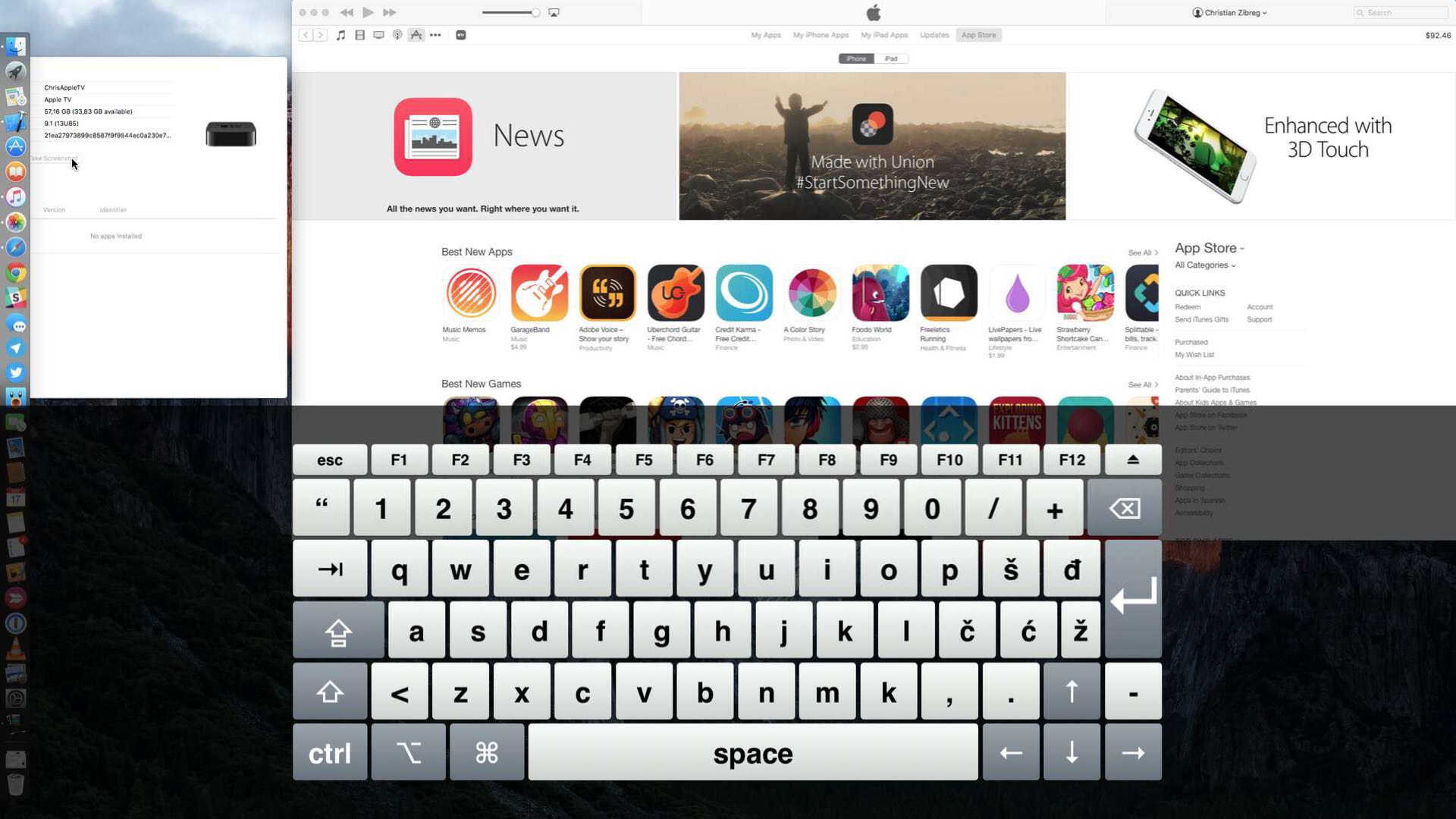 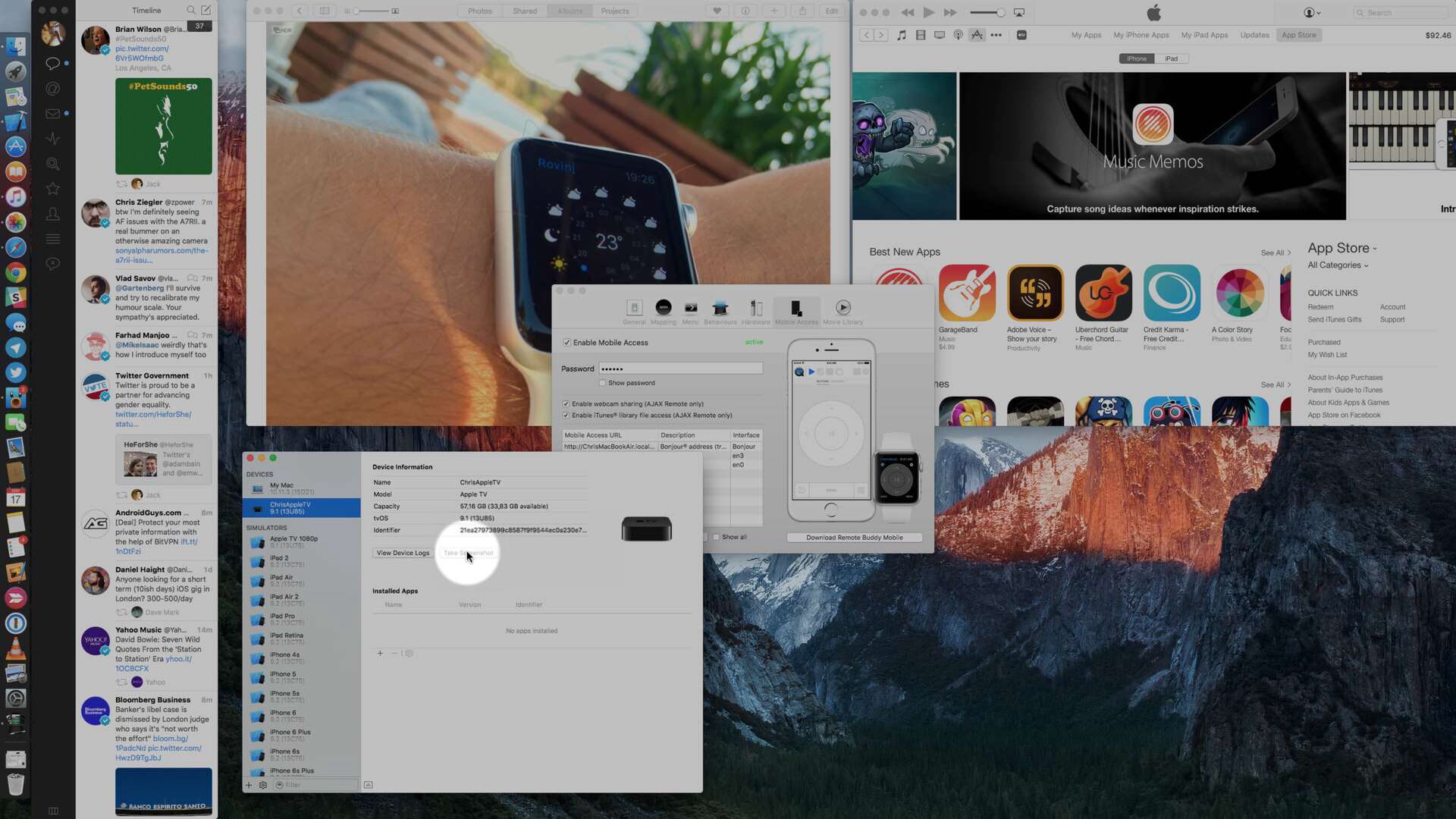 I am particularly fond of the Mouse Spot mode, which you enter by touching the Siri Remote’s Touch surface for two seconds, as shown above. This will produce a neat spotlight-effect, which can be useful for presenters as it helps them direct audience attention exactly where they want it.

For frequently used features, Remote Buddy provides quick shortcuts for more than a hundred Mac apps that can save you a ton of time. Just select Behaviors on your Apple TV and up pops a menu with per-app shortcuts. 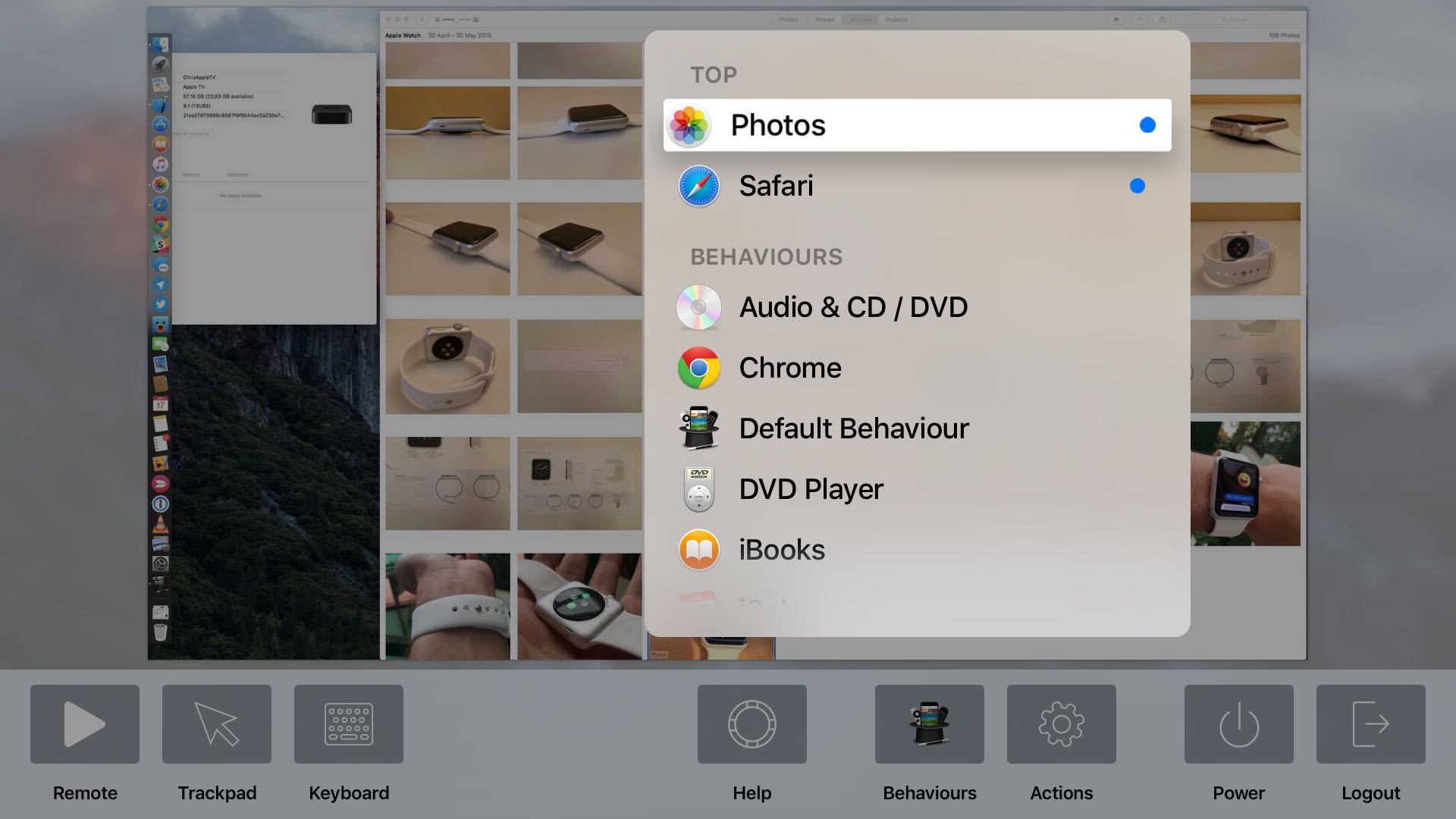 In iTunes, the available shortcuts include adjusting volume, choosing ratings, play/pause/stop controls and more. In Photos, you get a set of useful slideshow controls. 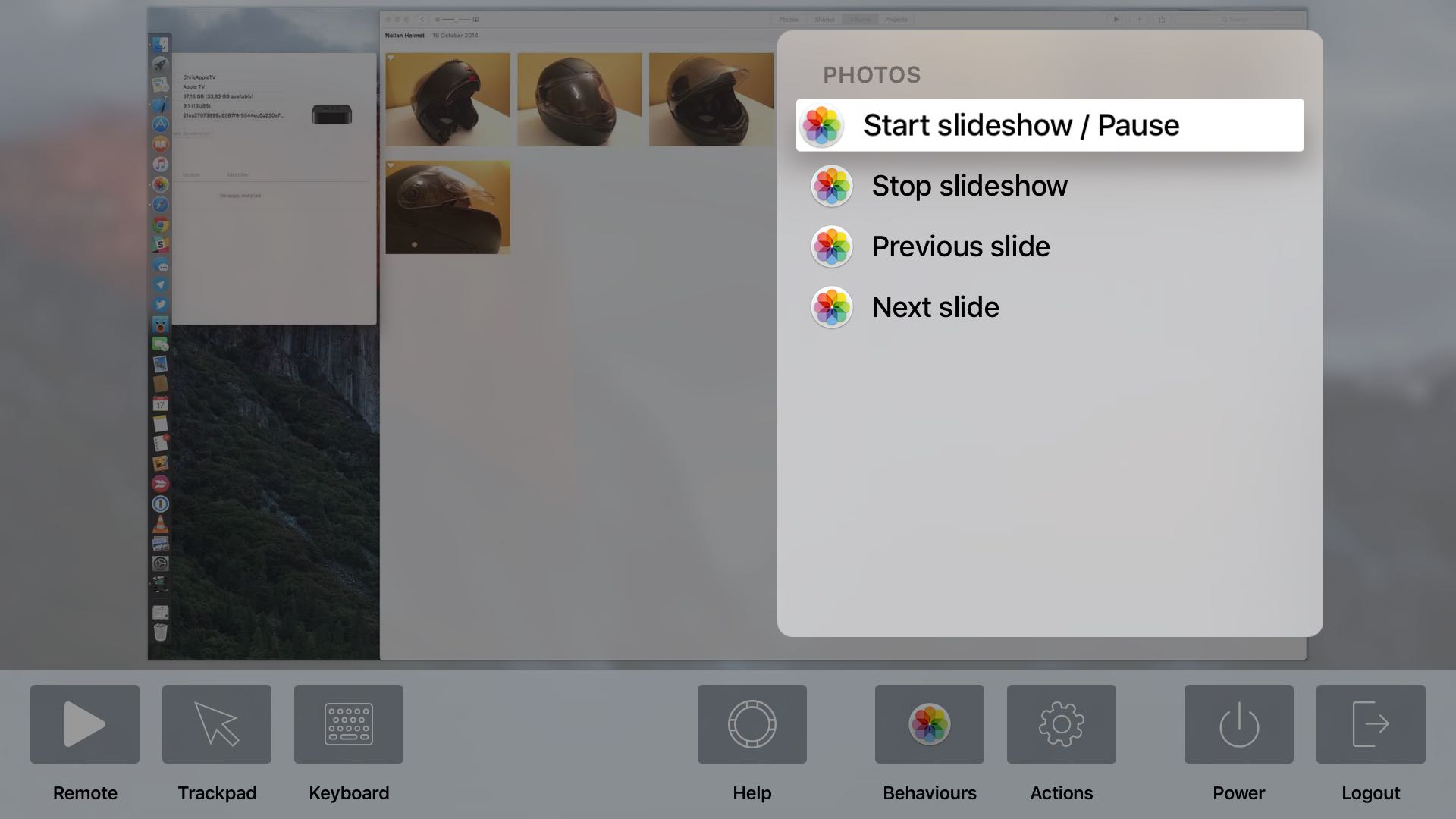 In Safari, actions let you increase/decrease font size, navigate to the previous/next link, select the previous/next tab, scrolling one page up/down at a time and more. Your frequently used actions can be marked as favorites for quick access. 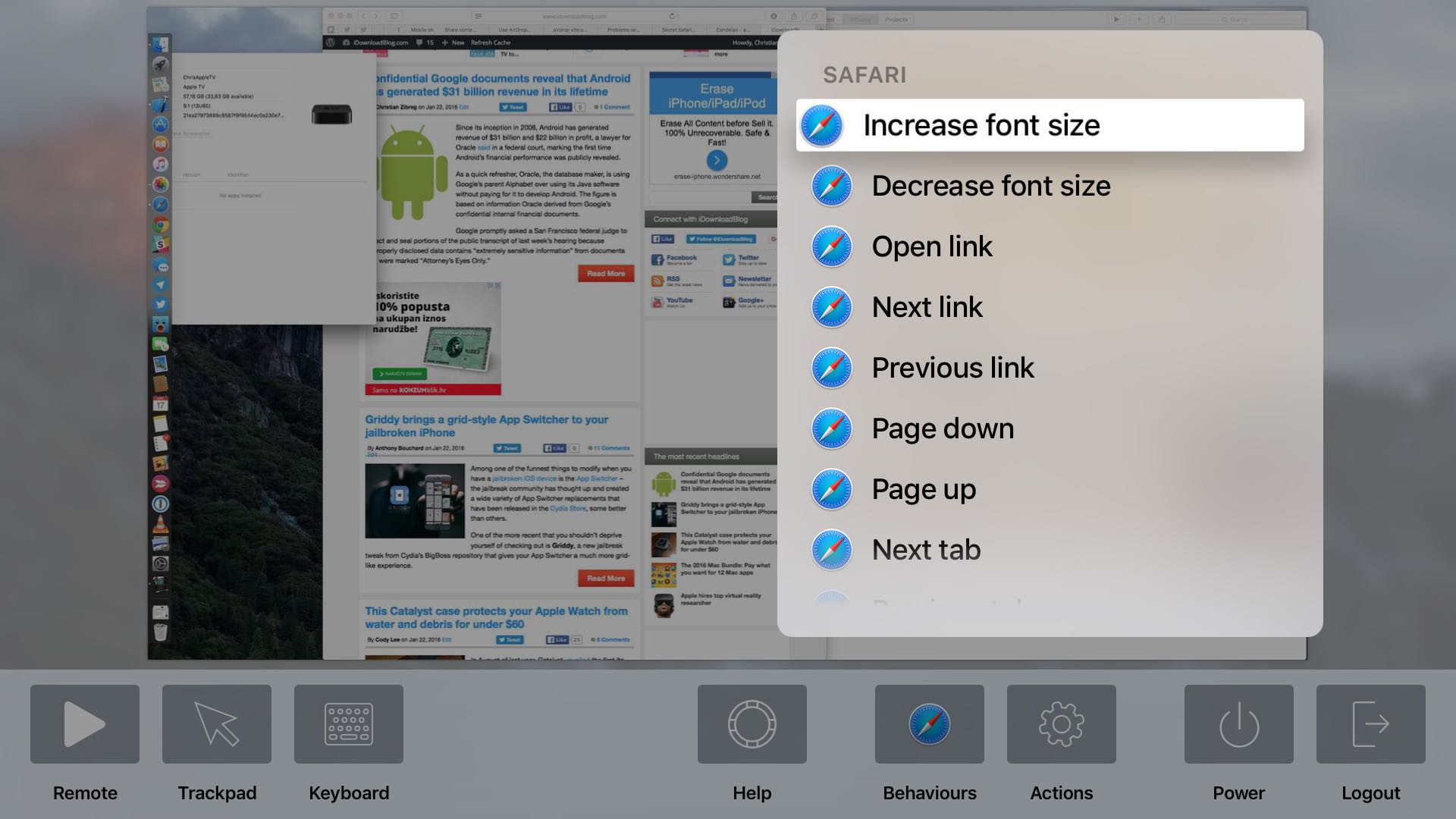 Last but not least, the app supports a Night mode which can be activated automatically between sunset and sunrise, calculated based on your Mac’s current location and time zone.  It’s an eye-friendly, dark color scheme optimized for use in dark environments.

The video embedded below shows off Remote Buddy in action, controlling a late-2012 Mac mini’s screen at 1080p resolution during full-screen video playback.

As I mentioned before, Remote Buddy takes advantage of the Candelair driver so you’re not limited to the Siri Remote and can use most infrared remotes with it.

The full list of supported hardware for Remote Buddy is available here.

I have included a few more screenshots further below which will help you grasp the richness of options available to you in the settings interface of the Mac helper app. 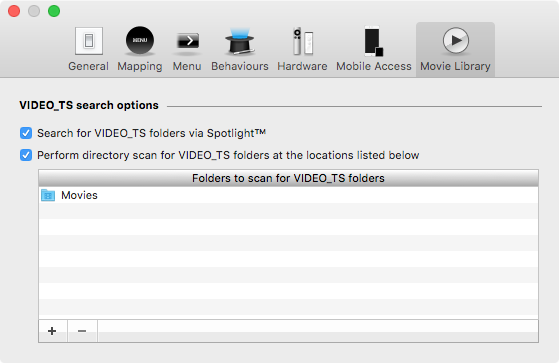 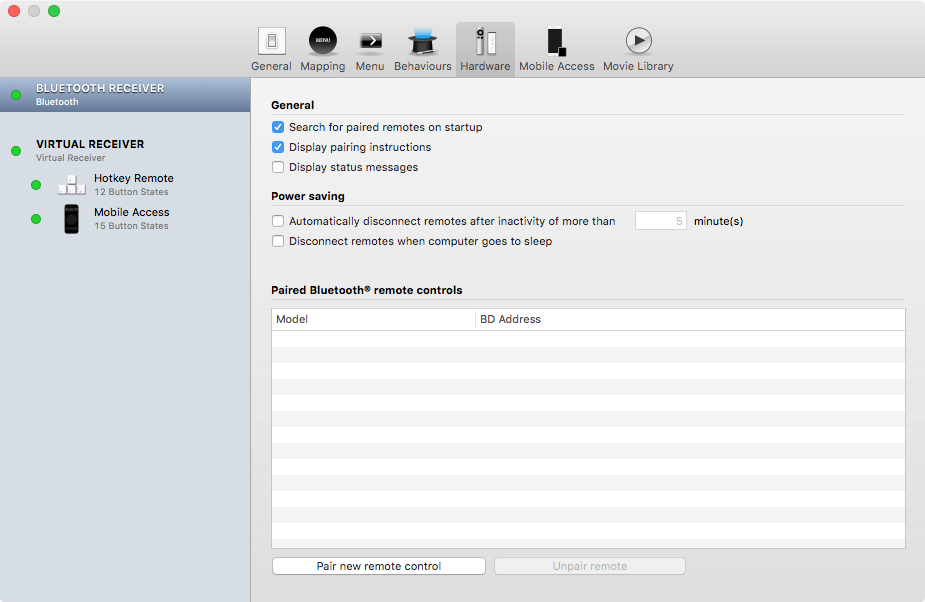 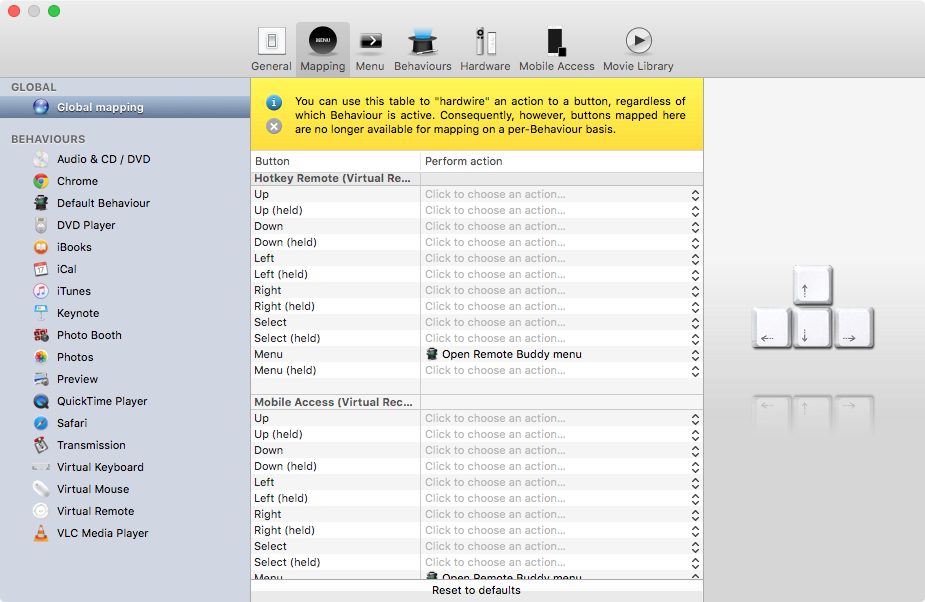 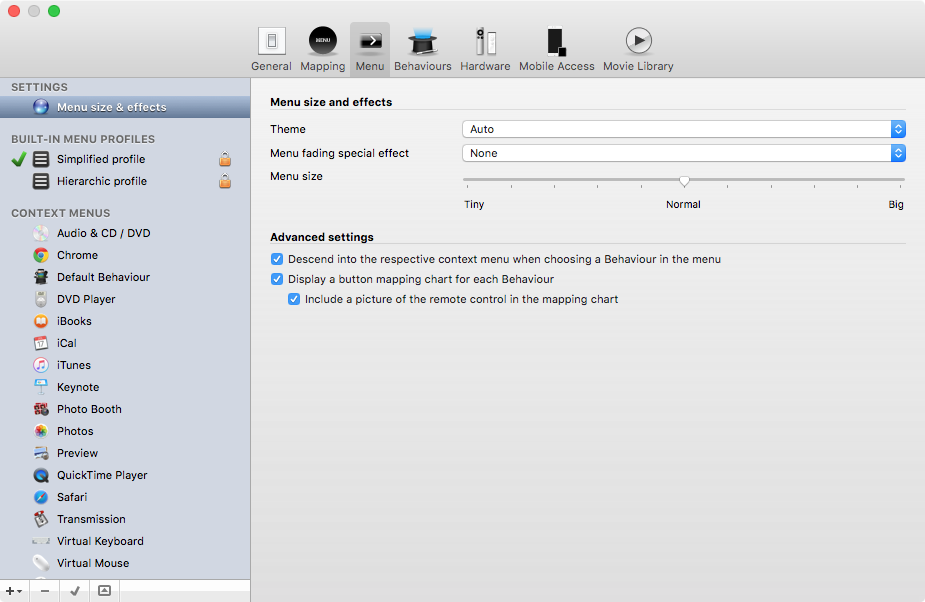 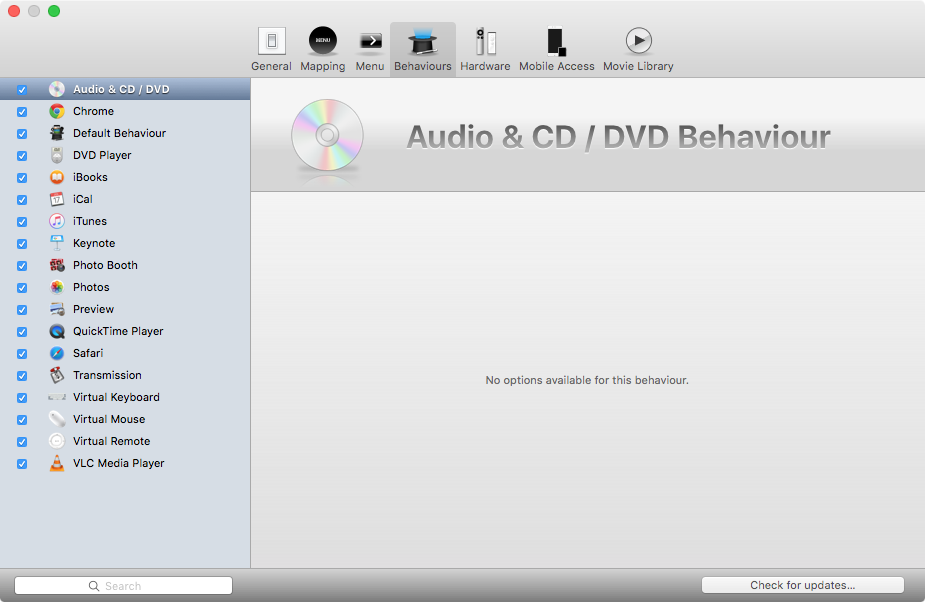 In addition to Remote Buddy Display for Mac, developers have provided mobile companion apps for your iPhone, iPod touch, iPad and Apple Watch in the form of Remote Buddy Mobile for iOS and watchOS. 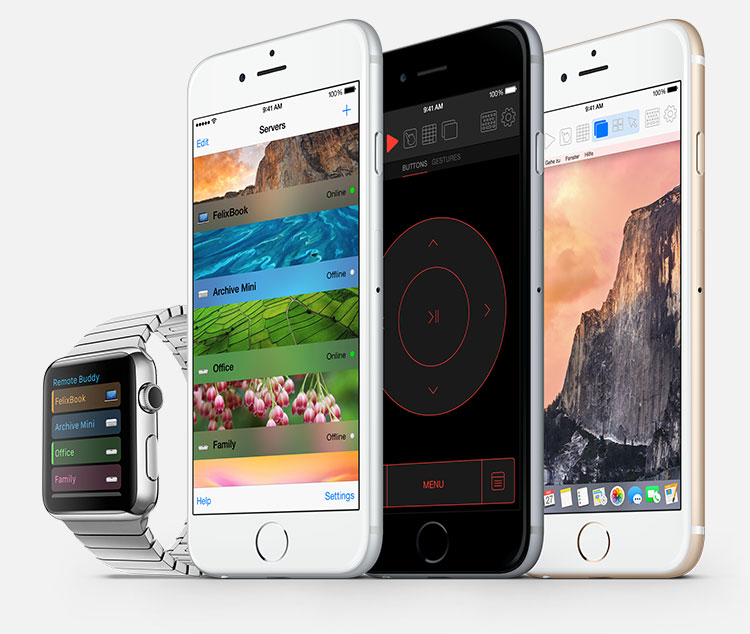 These apps let you control Mac apps with the Apple Watch and iOS devices. Many marquee features of Remote Buddy Display for Apple TV are supported in iOS and watchOS companion apps, including screen sharing, actions and app control, Night mode, virtual remote, trackpad or keyboard (through dictation on the Apple Watch), and much more.

Remote Buddy requires an Intel-based Mac and is fully compatible with OS X 10.11 El Capitan. Remote Buddy can be purchased through the official website for €24.99, which works out to about thirty bucks. A free 30-day trial is available.

The free of charge tvOS companion app for Remote Buddy is available in the App Store on your Apple TV (search for “Remote Buddy Display”).