Microsoft today rolled out updates to its mobile Office suite in the App Store: Word, Excel, PowerPoint and OneNote. Across the board these apps have gained support for 3D Touch shortcuts on the iPhone 6s/Plus.

In addition, the new ‘Annotate with Ink’ feature puts a set of cool tools on the new Draw tab for drawing, writing and highlighting things using touch, pen or Apple Pencil on the iPad Pro.

Upon pressing an app’s icon lightly on the Home screen of your iPhone 6s or iPhone 6s Plus, you’ll get but one shortcut: New Document, New Workbook and New Presentation, depending on the app.

Peek and Pop gestures within the apps are nowhere to be found.

On a brighter note, Office apps now expose their content to Spotlight on iOS 9 devices so you can quickly find your recently opened documents via Spotlight.

Last but not least, fonts for your documents, workbooks and presentations can now be downloaded on demand, from the cloud, when you need them.

In addition to 3D Touch shortcuts, OneNote has gained support for notifications and improved iPad multitasking: Side-by-Side and Slipover views now support searching, sharing and viewing the title of your open notebook.

In addition, OneNote’s built-in search has expanded in scope so you can search all of your OneDrive notebooks, even if they’re not on your device.

As mentioned, Office apps now come with the all-new Draw tab with additional inking tools available on the iPad Pro. “We have evolved our apps to sense the approach of an active pen so that you can start to ink instantly, without needing to select a feature or control,” said Microsoft. 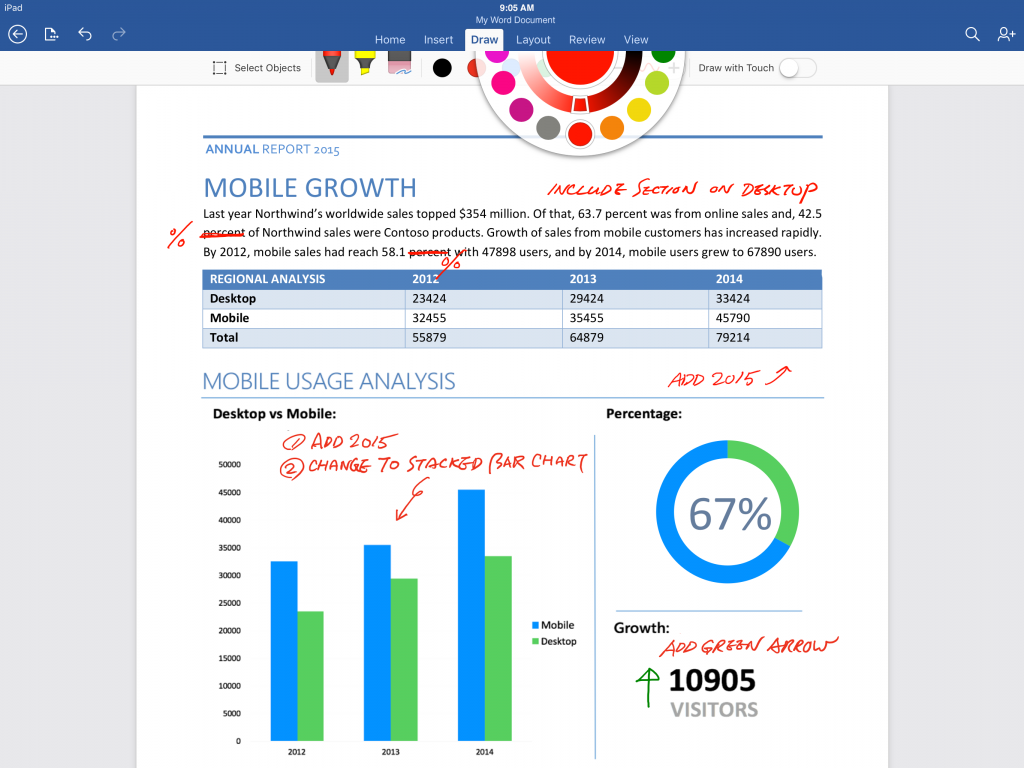 Wit the new ‘Covert to Shapes’ mode, you can transform hand-drawn shapes to perfect looking shapes to create customizable diagrams and process flows. For instance, sketch two quick circles for an easy Venn diagram or draw a process flow of squares and arrows and it’ll convert sketched shapes into formatted graphics.

PowerPoint Designer capability and the Morph feature from PowerPoint for Windows desktop and Windows Mobile are now available in PowerPoint for iPhone, iPad and iPad Pro.

And last but not least, Office Insider, a preview program that permits Office 365 subscribers to get early access to the latest Office features, is now available as an opt-in feature to Mac owners from the Microsoft Auto Update tool.

Word, Excel, PowerPoint and OneNote are available free in the App Store.