Procreate Pocket, an iPhone and iPod touch edition of the drawing and illustration app that started out as an iPad-exclusive, was updated this morning with a bunch of 3D Touch goodies and other enhancements.

Procreate Pocket 1.6 includes support for pressure-sensitive painting with 3D Touch on the iPhone 6s and iPhone 6s Plus. The refreshed app claims double the frame rate across all supported devices and includes an all-new native Apple Watch app on watchOS 2 that improves the battery life and responsiveness.

Pressing Procreate’s Home screen icon lightly brings up a quick shortcuts menu with two options: New Artwork and New 4K Artwork. Within the app, you can paint with your finger with support for pressure sensitivity on 3D Touch-enabled iPhones. 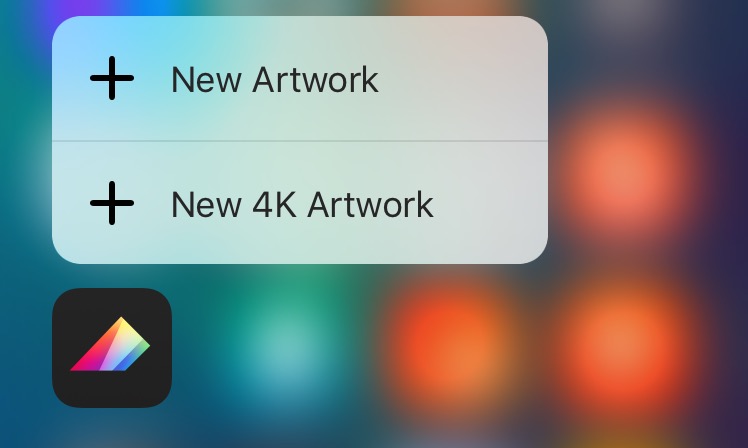 In addition, the app lets you use any regular capacitive stylus. With a stylus or 3D Touch, you can adjust the brush size or opacity by adjusting the pressure of your stroke.

A new two-finger gesture will undo your last action. There’s also three-finger tap Redo, and four-finger tap to toggle fullscreen. On iPhones from the iPhone 5 onward, the app now sports the full toolbar from Procreate for iPad in landscape orientation.

As a nice bonus, iPhone users can now tap or drag layers while the Alpha Lock feature is now accessed via the Layer Options menu rather than the swipe gesture.

Procreate Pocket requires an iPhone or iPod touch with iOS 9.1 or late. The native Procreate Palette app for the Apple Watch requires watchOS 2 or later.