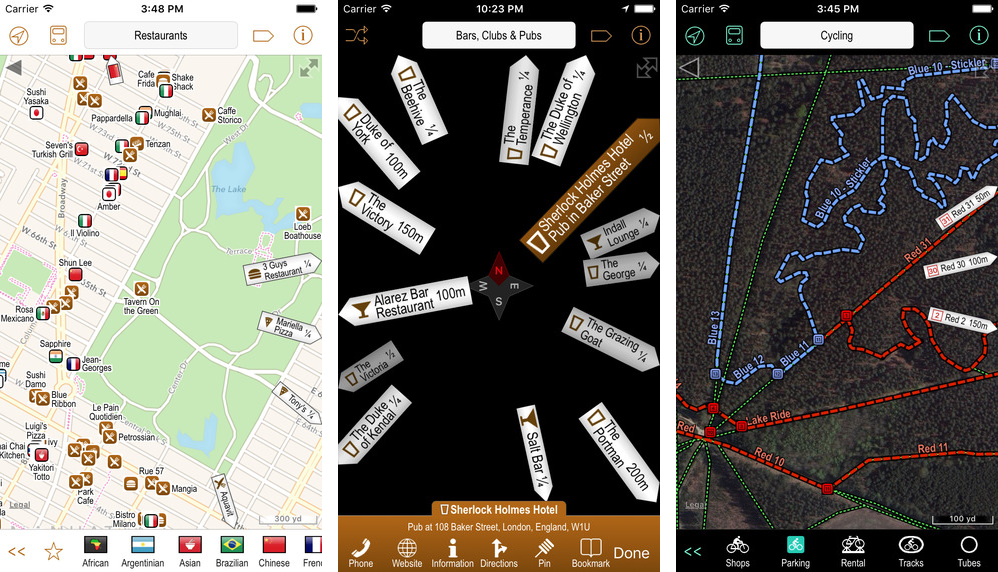 Poison Maps, a cool map app in the App Store based on the OpenStreetMap database, takes a novel approach to 3D Touch gestures versus most other 3D Touch-enabled apps, which makes it uniquely useful for navigating.

On non-iPhone 6s devices, the app takes advantage of the patent-pending Context Pan gesture letting you pan large distances by using a single touch of a finger instead of the usual two-fingered pinch-zoom gesture.

On devices without 3D Touch, however, context zooming and context panning is implemented using a long touch to control how far the map zooms out, rather then using the force of the press, as shown in a video demonstration further below.

In practice, this means you can browse maps without worrying about finding your way back to where you started because as soon as you lift the finger, Poison Maps takes you back to the zoomed-in position.

And when you force press once to zoom out of a location, a red box outlines the original view. As a bonus, if you move your finger around while 3D Touching, the box will follow you, and if you lift your finger you’ll go right to that zoom level.

It’s pretty ingenious and here’s a video to prove it.

It would be fantastic if Apple implemented 3D Touch in its own Maps app for zooming and panning, wouldn’t you agree?

The app includes over 20 million points of interest (POIs, hence the POI in POIson) and over three million miles of rail, bus, cycle, hiking and ski routes. POIs are stored on your device, meaning you can navigate or find POIs even when offline.

Check out the official website for lots more information on Poison Maps.

Poison Maps requires an iPhone, iPod touch or iPad with iOS 8.0 or later and costs $1.99 in the App Store for the global version that comes with more than 600 megabytes of data for offline navigation. There’s also a free North American version with In-App Purchases to buy additional POI data.

Poison Maps also includes a highly responsive watchOS 2 app for your Apple Watch which displays the toolbar as a 3×3 grid, giving you the same ability to choose from hundreds of POI types in a very rapid two or three taps.

Source: Cult of Mac via The Loop