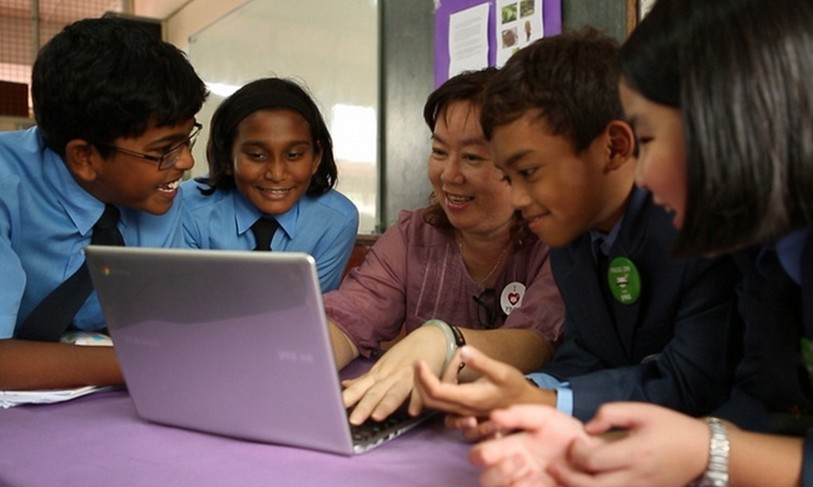 These notebooks accounted for more than half of all classroom devices sold in the third quarter in the US.

According to a Futuresource Consulting survey, that’s a huge increase for Chrome OS-driven machines that accounted for just one percent of K-12 sales in 2012.

“Chrome is the clear US market leader now with over 50 precent of the K-12 OS market share, meaning Apple and Microsoft both have significant ground to make up, said Mike Fisher, Associate Director of Education Technology with Futuresource.

So far this year, Chromebooks have hit 4.4 million sales of the 8.9 million devices sold to schools and school districts, with about 30,000 new Chromebooks being activated in US classrooms every day.

“It’s been amazing to us to see that growth happen just in that short amount of time,” said Google’s Rajen Sheth. “If you look at the overall market for devices in education, it’s actually expanded a lot and Chromebooks have actually taken a lot of the expansion.” 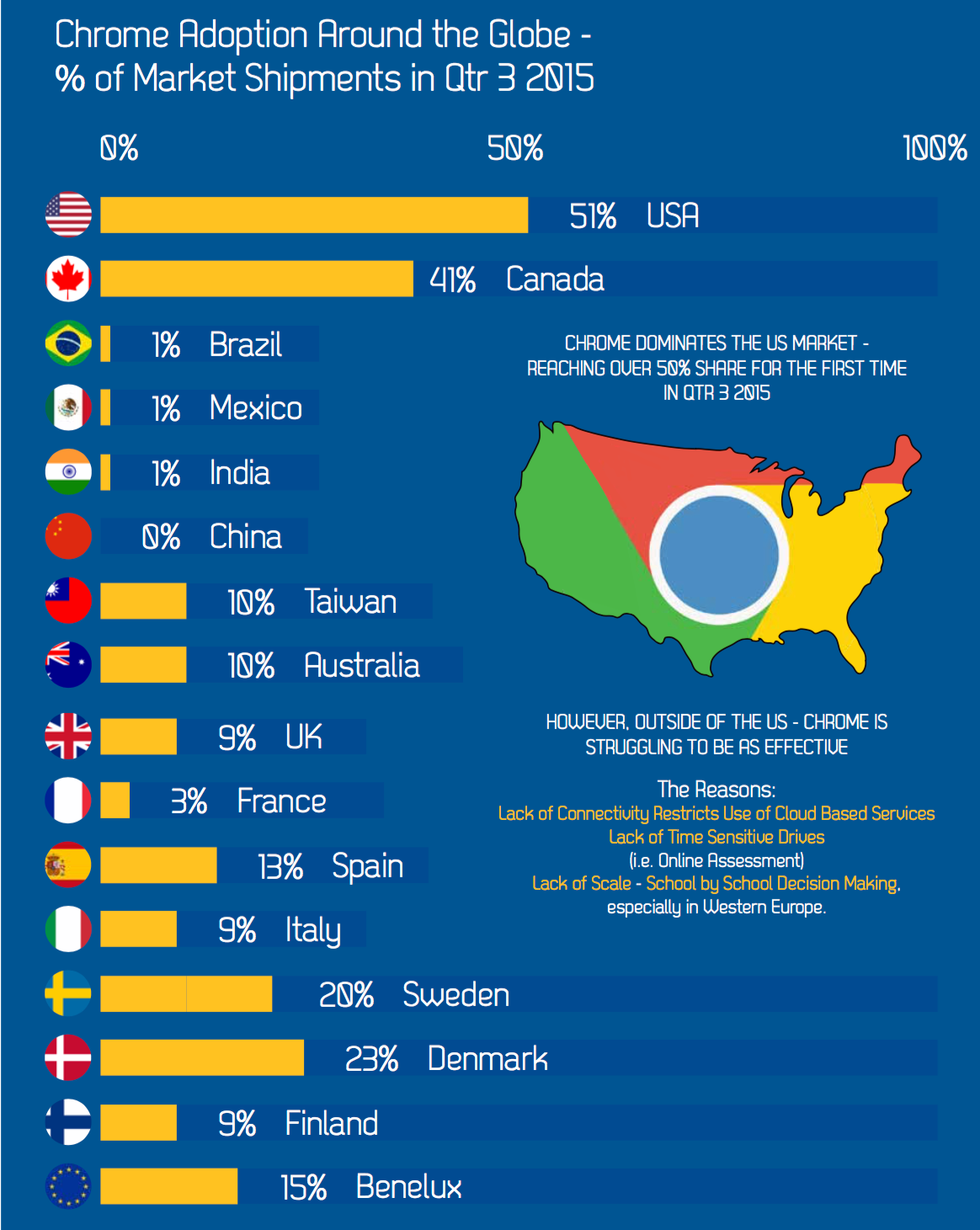 What about Microsoft and Apple?

By comparison, Windows fell to a 23 percent share of the K-12 US market in the third quarter, Macs went from eight percent in the year-ago quarter to seven percent in Q3 2015 while iOS fell from 24 to seventeen percent.

Google’s own Android platform accounted for just one percent of devices in the quarter, down from three percent a year ago.

“The combination of the simple to use ecosystem, attractive hardware price point and industry leading management platform has resulted in Chromebooks gaining widespread momentum in the US market,” reads the report.

Much of the growth of Chromebooks stems from their cost-effectiveness. As the chart below depicts, sub-$300 devices as a share of the K-12 education market in the United States increased from 25 percent in Q3 2013 to 53 percent in Q3 2015.

Of course, Apple doesn’t really compete in the sub-$300 price segment. As  for Microsoft, the Windows maker and its partners have yet to release machines within that price range that would be suitable in education.

Chromebooks typically start at $200-$230, allowing them to effectively target the entry-level K-12 market for non-tablet purchases. The CTL J2 Chromebook, for instance, is just $199. Another example: Toshiba’s Chromebook 2 is $249.99, plus a $30 management fee.

The most affordable Mac notebook: the $899 eleven-inch MacBook Air. As for iPads, they’re not on the cheap side either and don’t ship with a keyboard—an important pre-requisite in the classroom.

Windows leads in rest of the world

The rest of the world paints a not-so-rosy picture for Chromebooks: outside of the United States, Chromebooks accounted for just three percent of the worldwide education market during the third quarter.

That’s because emerging markets such as Brazil, Mexico and India lack the connectivity required to provide seamless experience with Chrome OS-driven notebooks. 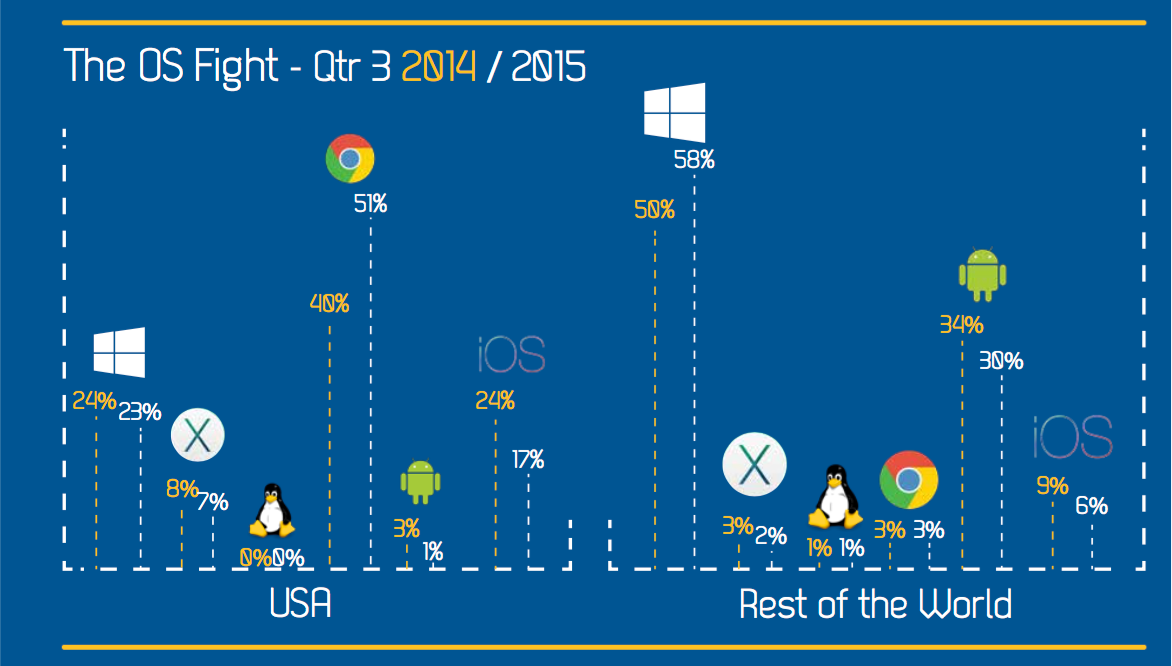 The study concludes that Google’s gains could be short-lived as Microsoft and its partners are gearing up to release a bunch of Windows notebook devices in the sub-$300 category throughout 2016.

Convertible devices—including two-in-ones and tablet/notebook hybrids with detachable keyboards—could increase their share of the US education market, too. Prices of these devices are expected to drop significantly next year, from the current $500+ prices down to the $300-350 price range.

According to Fisher, Apple is currently developing an app for teachers with real-time student data analytics and will roll it out in the spring 2016, in partnership with IBM.

“That is something they are working on and is very, very interesting and could be a unique selling proposition in the future,” said Fisher. “If they can prove effective data analytics that school leaders can utilize for reviewing student progress then that could be a very compelling unique selling point.”

Despite Chromebook gains in the sub-$300 segment, Apple’s products continue to do particularly well at the collegiate level, where more powerful computing is needed, as per Fisher.