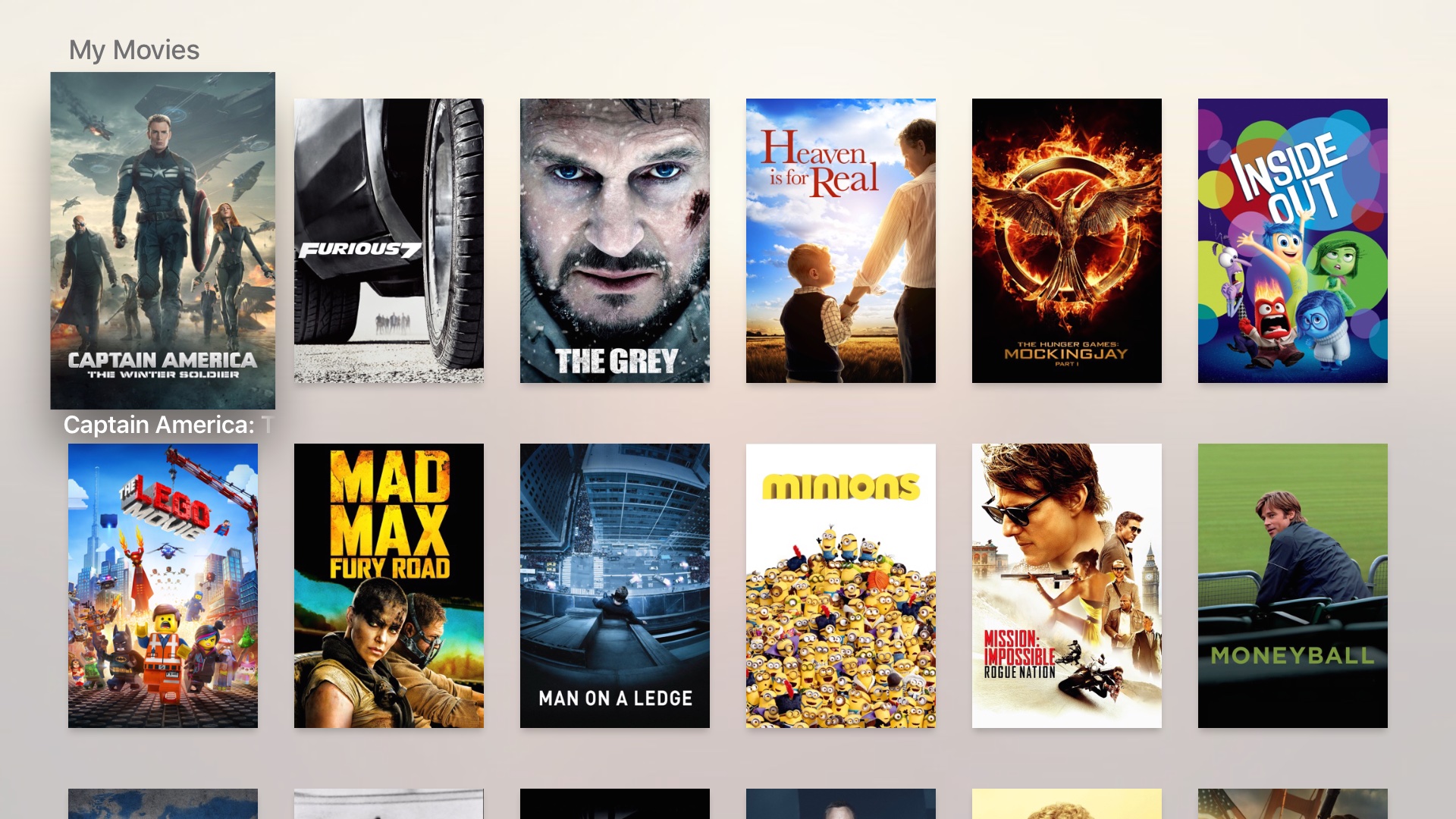 As an Apple TV believer since its inception, I’m ashamed to admit that I’ve never jailbroken my device even though the lack of downloadable media player apps that would let me play “foreign” video file types has been driving me nuts.

When the latest Apple TV launched, I immediately got in touch with James Abeler, better known as prominent jailbreak developer FireCore, who happens to be the brains behind the ultimate Apple TV jailbreak, aTV Flash Black, and the creator of a versatile iOS media player, called Infuse.

As someone who has been pretty much cheerleading Infuse since its April 2013 debut, I was extremely impatient to find out if an Apple TV edition of Infuse would be on par with its iOS counterpart.

James was kind enough to add me as a beta tester so I was able to play with Infuse for Apple TV for about a week, and here’s what I was able to gather.

TL;DR: Feature-wise, Infuse 4 for Apple TV supports pretty much the same feature set that Infuse for iOS does—the big omission being local video storage for downloads due to Apple’s restrictions on third-party tvOS development. And yes, Infuse 4 for Apple TV will be a free update for all current users of Infuse 3 Pro.

The latest Apple TV is a great device unless you want to play your own non-iTunes media stored on a computer, network drives, Apple’s Time Capsule and so forth.

As ridiculous as it sounds, Apple doesn’t provide an app for the new box that would solve this problem. And even if they did, it would only support iTunes-friendly media, I’m sure. But now that the Apple TV 4 has its own App Store, users can work around this by downloading a third-party media player. 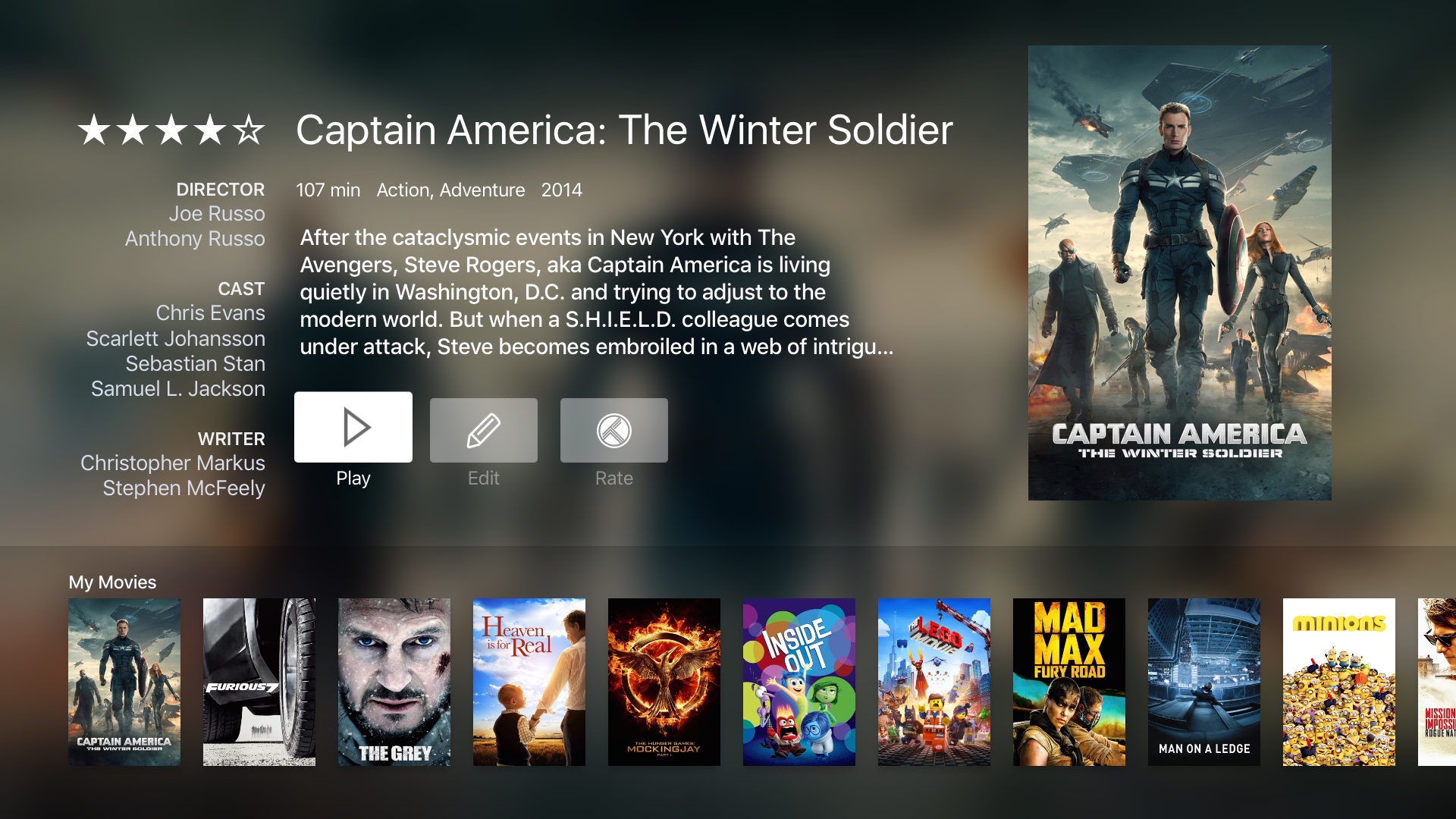 I’ve tried a few and am convinced that Infuse bests them all.

Tapping the same advanced decoding guilt to take full advantage of the 64-bit A8 chip, Infuse for Apple TV renders most non-iOS audio and media files type you throw at it with ease, including high-resolution Matroska (MKV), DivX, XVID, Microsoft’s AVI and more.

Upon launching the app, it automatically detected wireless drives shared on my local network, as well as my MacBook Air and Time Capsule. 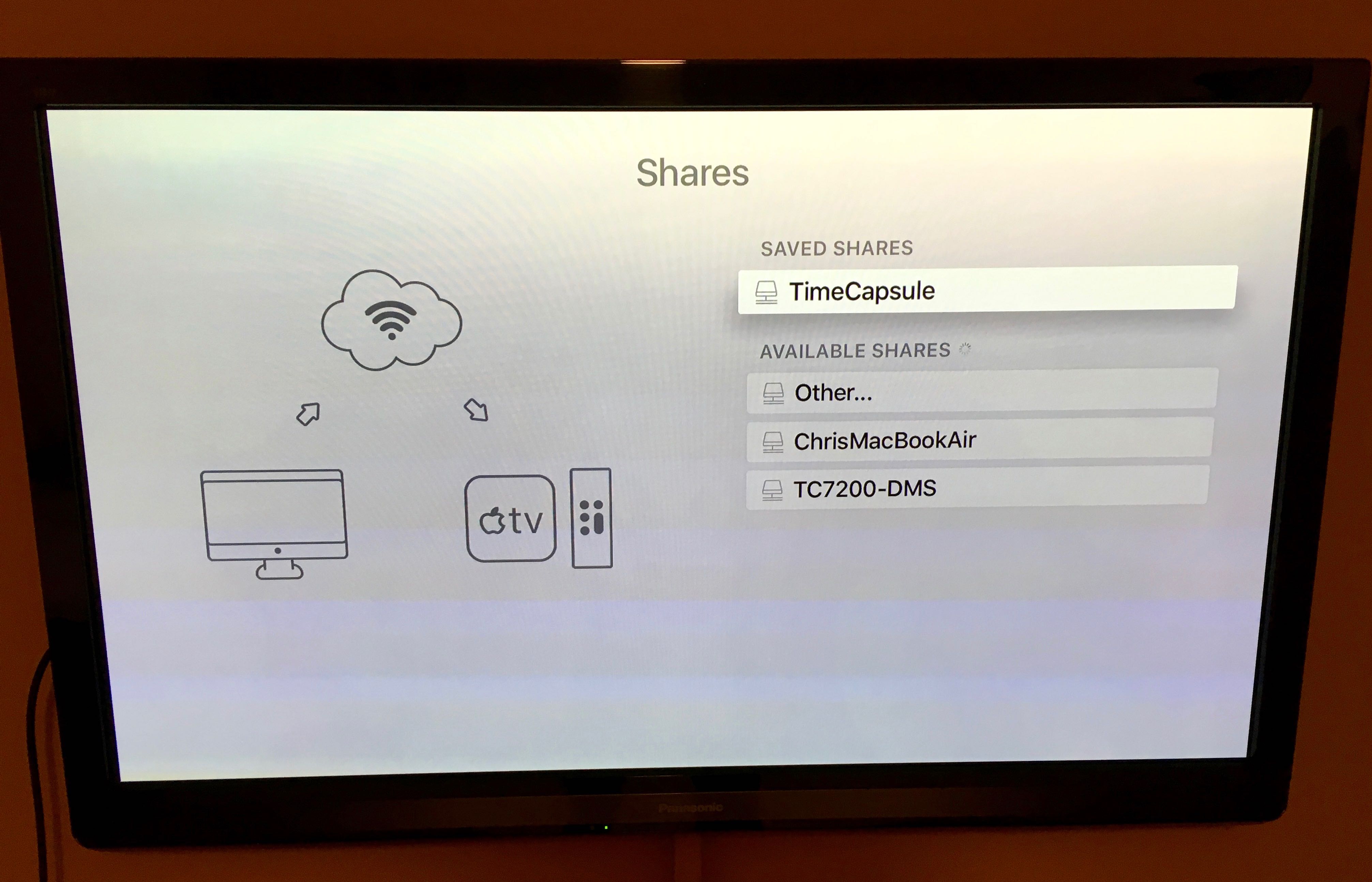 I just typed in my credentials, chose a folder and let Infuse analyze my multi-gigabyte personal video library that lives on my Time Capsule. The app retrieved poster artwork and meta data for each video, presenting a grid of movie posters that look awesome on a big screen TV.

Upon selecting a movie, it took only a second or two for Infuse to begin streaming content off my Time Capsule’s 5400 RPM hard drive, without dropping a single frame. To be clear, my Wi-Fi network is the previous-generation 802.11an. 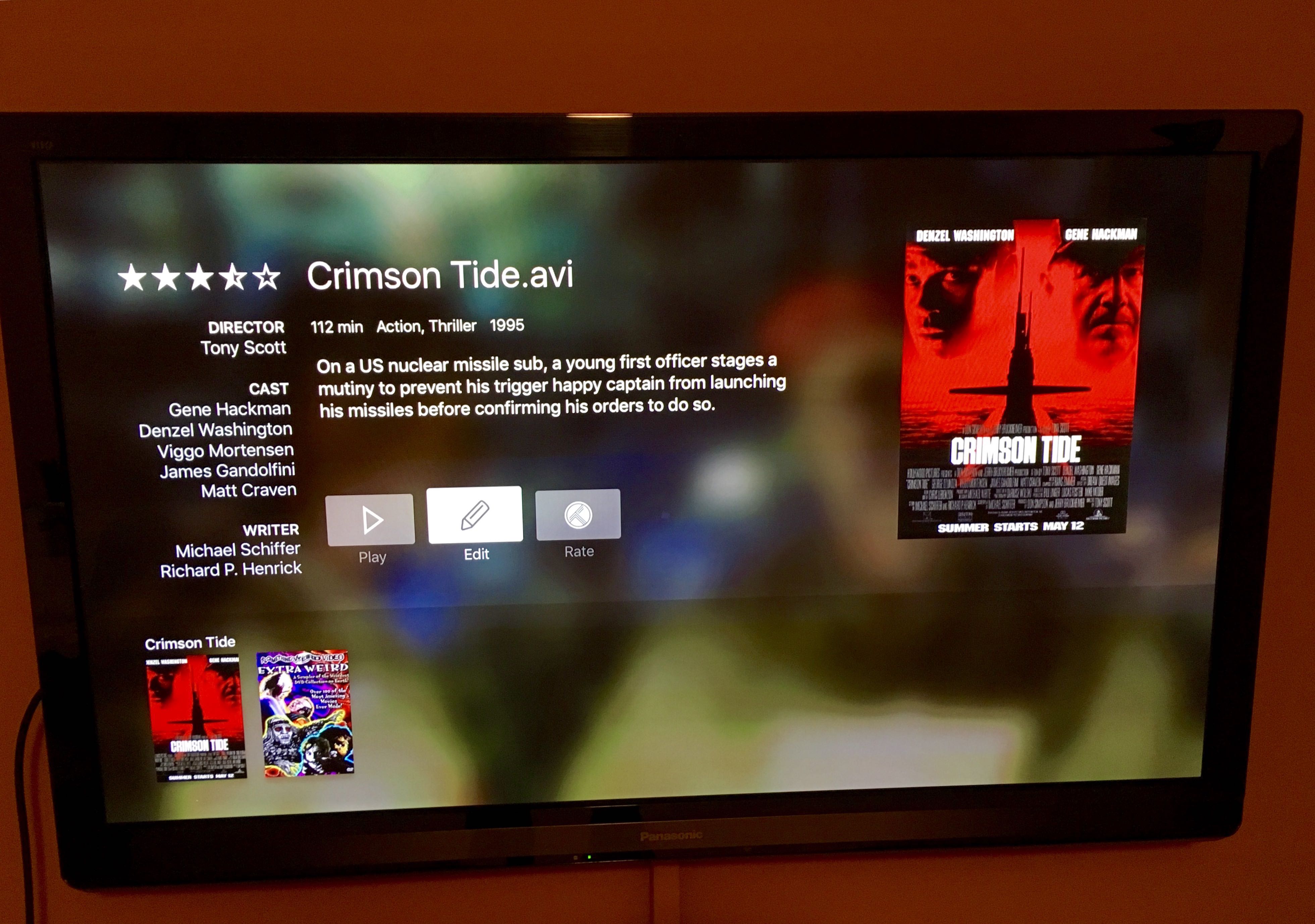 Swiping down on the Siri Remote’s Touch surface pauses the playback and brings up an overlay with movie information, zoom mode (Normal, Crop and Stretch) and audio settings, chapter selection and rich subtitle options. 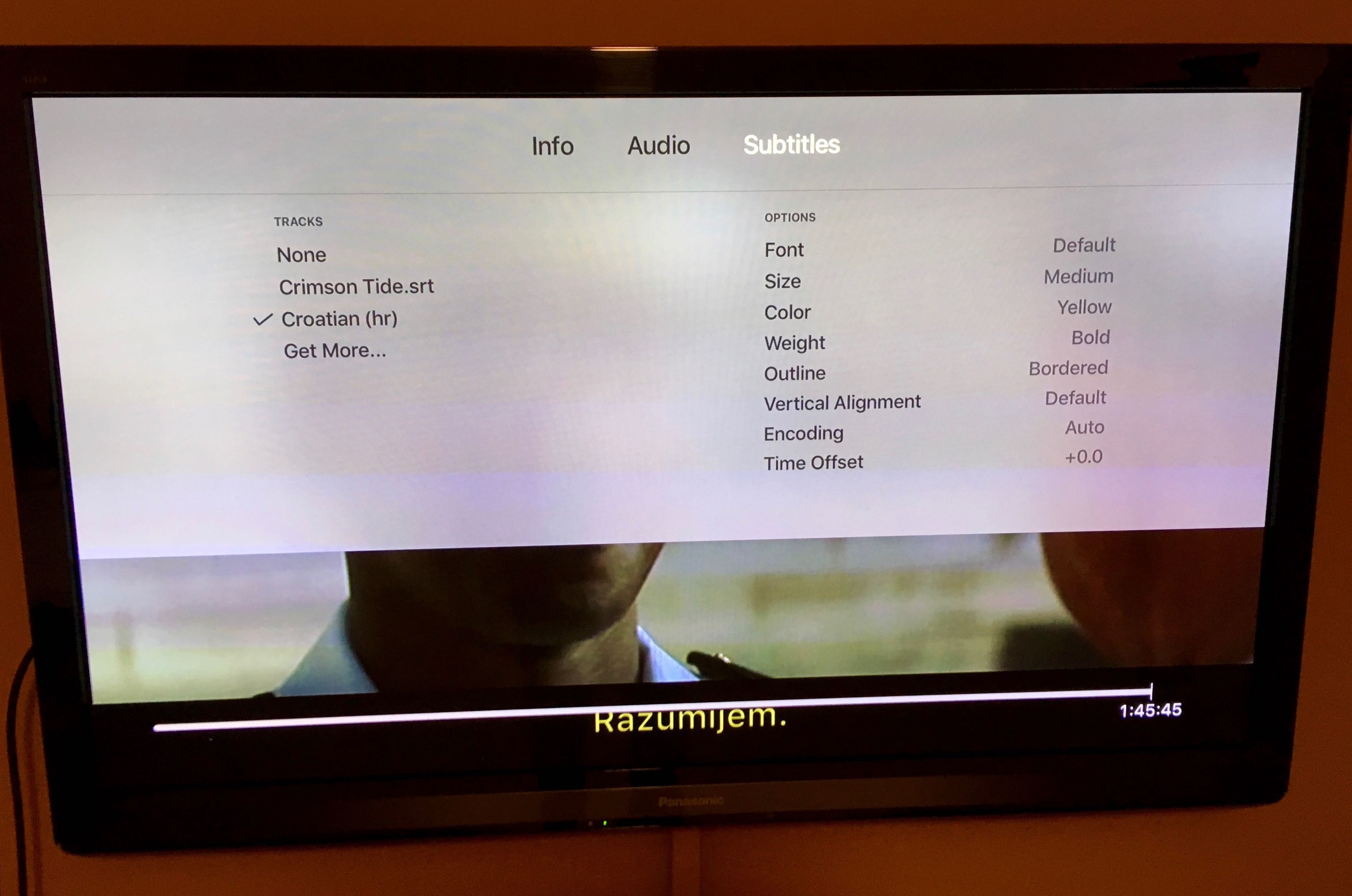 Which brings me to Infuse’s killer feature: subtitle downloading.

Rather than manually saving subtitle files to my Time Capsule, I chose Get More Subtitles and the app presented me with a list of matching items in my chosen language, obtained from OpenSubtitles.org. I selected one and presto—the subtitle was immediately downloaded to my Apple TV.

Being able to watch any video file type with subtitles in any format or in any language is easy on the desktop. Now, Infuse brings this same convenience to your living room experience. 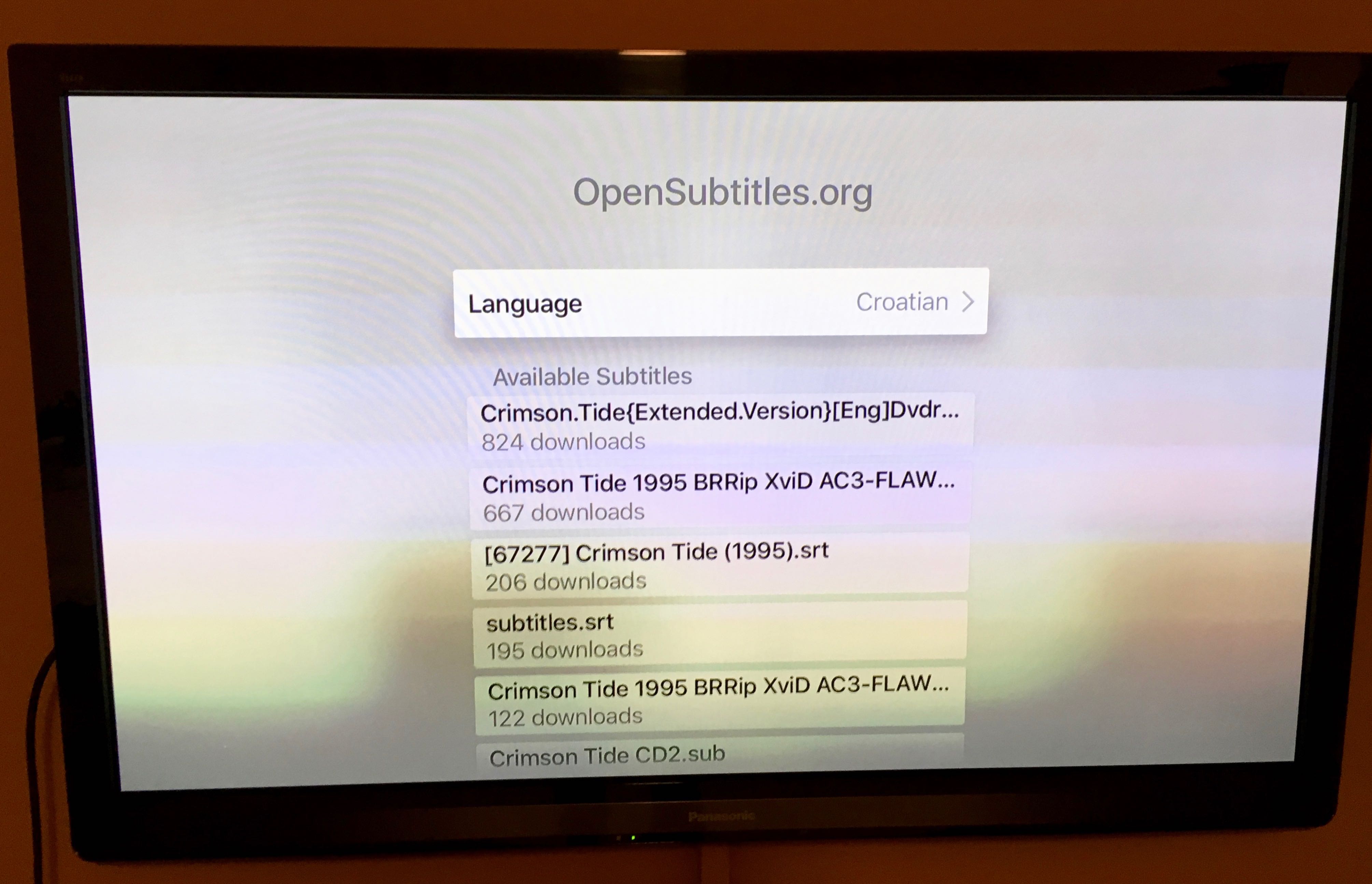 The experience is pretty much the same as watching a movie purchased on iTunes and selecting between embedded subtitles, only Infuse downloads them as needed. The process is streamlined and works like a charm.

Settings, Traktr and other tidbits

In Infuse’s settings, you’ll find an option to log in to Traktr.tv. Then, just hit Rate on any movie page to post your rating directly to Traktr.tv (you can even choose Edit on movie pages to rename the underlying file’s name). 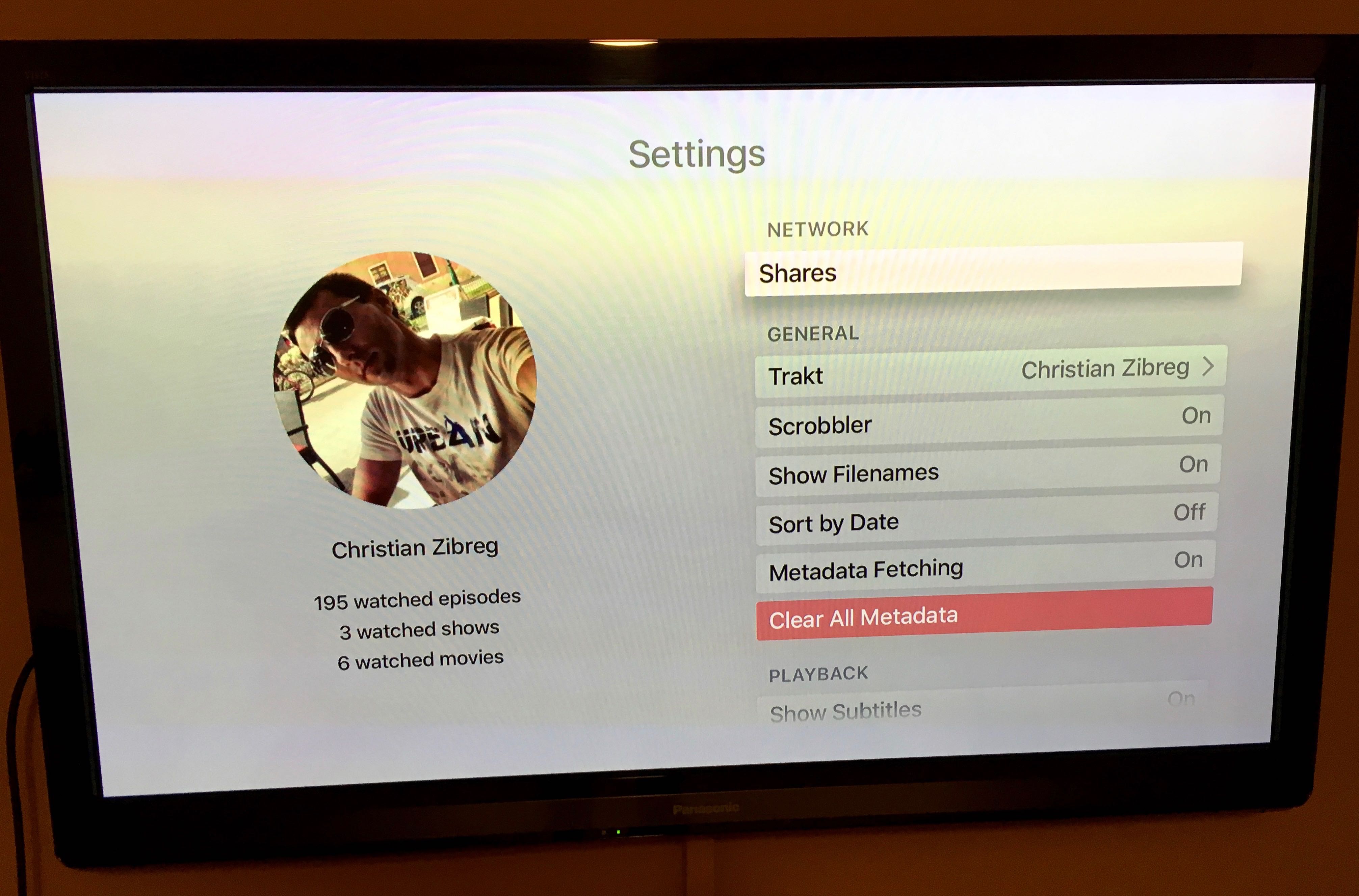 Dolby/DTS is especially handy in light of the revelation that the new Apple TV ditches optical out for enhanced sound quality via HDMI, with support for Dolby Digital Plus 7.1 surround sound. 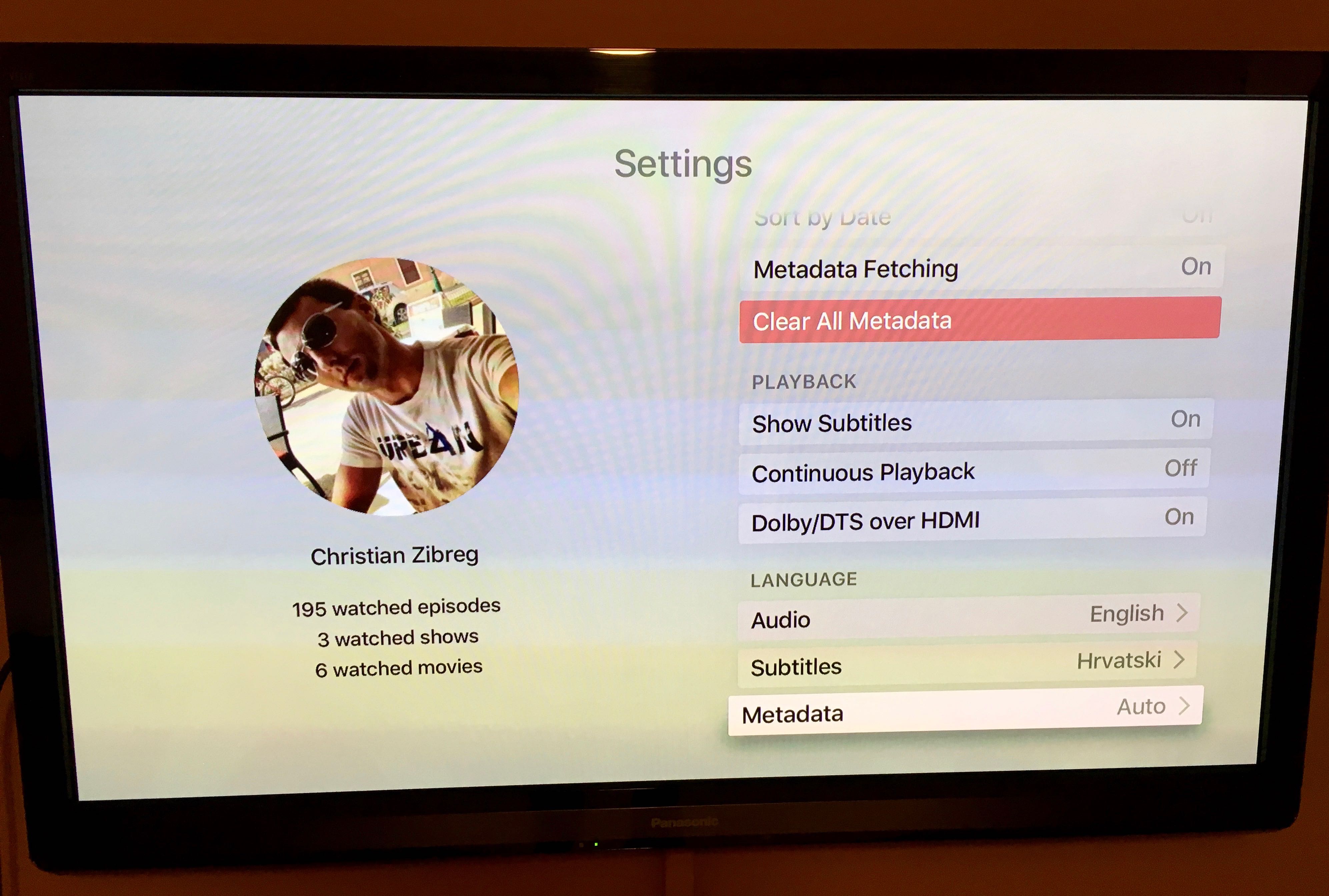 After enabling Dolby/DTS over HDMI in Infuse’s settings, I was able to enjoy full surround sound via my receiver in all its Dolby digital glory, something you won’t get with most other third-party media players.

There’s no other conclusion to make than staying that Infuse is arguably the new Apple TV’s killer app. I’m probably biased—after all, I am a self-professed Infuse fan—but that doesn’t change the fact that this app is superbly programmed and opens a world of possibilities for those who own Apple’s latest box. 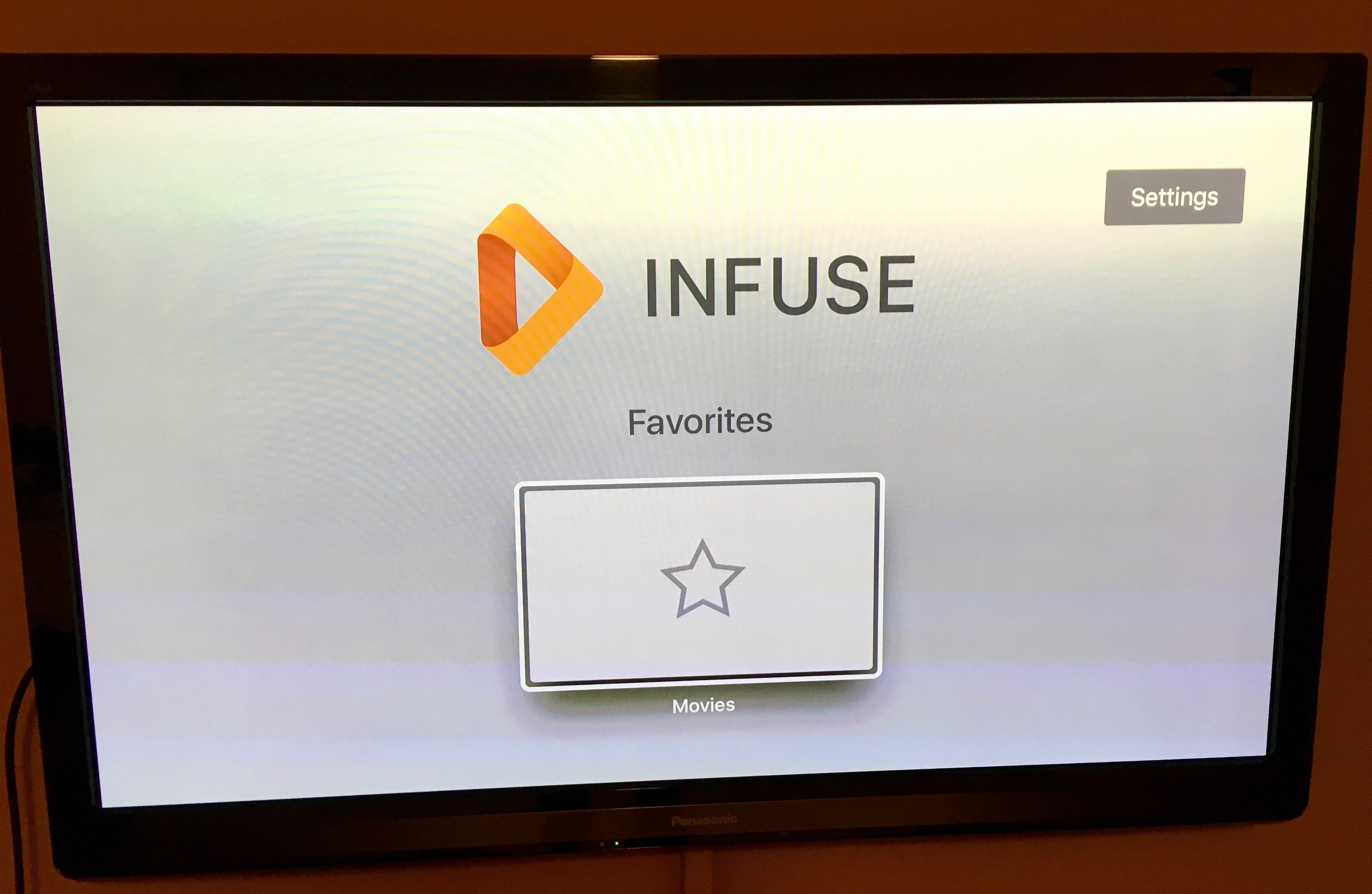 I find Plex for Apple TV too cumbersome to set up and use, and other apps too lacking or downright annoying due to their reliance on Mac helper apps to transcode media files.

With Infuse, all processing, rendering and transcoding happens directly on your Apple TV. I am very excited for Infuse’s upcoming Apple TV release and you should be, too.

James Abeler, the brains behind both Infuse for iPhone and iPad, was kind enough to agree to a quick email interview and share his thoughts on third-party Apple TV development.

What are your first impressions of tvOS and the SDK?

We’re simply ecstatic about Apple’s new ATV App Store, and feel it’s going to ignite a huge creative advancement in what we come to expect from TV UI design as a whole. Having an official channel for users to install apps on the Apple TV is something we’ve been hoping for since the ATV2 was released in 2010.

What’s the status of Infuse for Apple TV?

With our iOS 9 update of Infuse already in Apple’s hands, we’ve shifted our main focus to creating Infuse for Apple TV, and considering the short time the SDK has been available, have made some great progress thus far.

We were also fortunate enough to be selected to receive early access to the Apple TV hardware, which will dramatically increase the quality and speed of which we can deliver a finished product to our users.

How will Infuse for Apple TV compare to iOS edition?

While we’ll undoubtably have to look at doing a number of things differently under tvOS, our goal with Infuse for the new Apple TV is to bring the same great experience our users have come to know and expect on iOS to the big screen.

So, what features will Infuse for Apple TV include?

That means support for multiple video formats with Dolby and DTS audio, streaming from multiple sources, exceptional metadata, and comprehensive syncing with trakt – all wrapped in a beautiful package that is easy and natural to use.

”The next few weeks and months are going to be very exciting,” he summed it up.

Infuse 4 for Apple TV will be a free update for all current users of Infuse 3 Pro. Infuse for iPhone, iPod touch and iPad is available as a freemium download from the App Store.

Advanced features requiring a $2.99 In-App Purchase include support for additional video formats and Dolby Digital Plus (AC3/E-AC3), DTS and DTS-HD mobile surround sound, streaming a wide variety of video types over AirPlay and Google Cast, two-way trait sync of watched history and playback progress and background playback, even while your iOS device is locked.