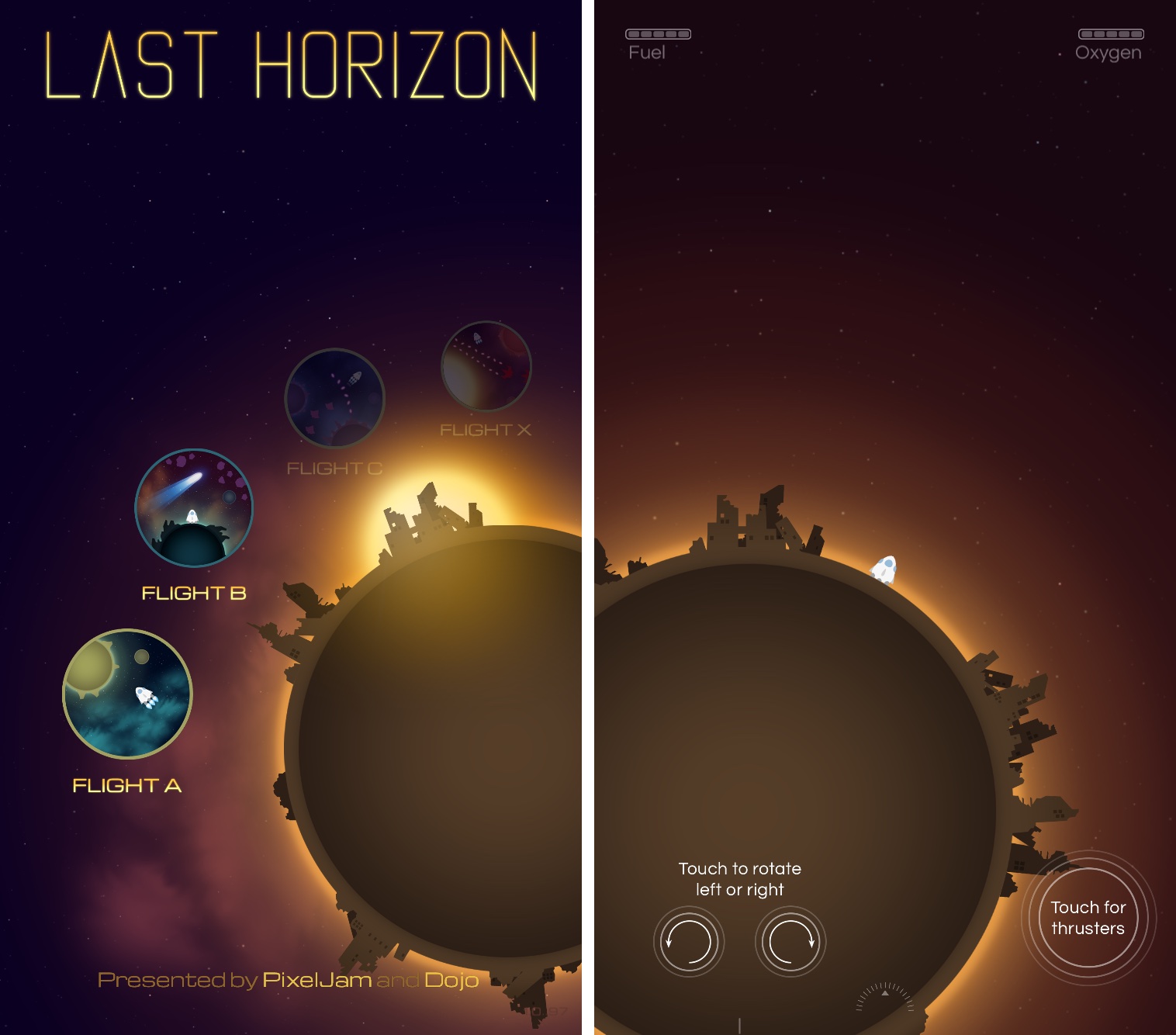 As an avid stargazer who’s been dreaming about space travel for ages and a sucker for minimalist games, Last Horizon immediately piqued my interest.

In fact, Last Horizon was an instant purchase for me and I never regretted dropping $2.99 on this space survival and exploration title from Pixeljam. Last Horizon puts you in the shoes of a pilot of a lone spacecraft.

Your oxygen and fuel supplies are limited and your goal is a simple one: you must travel the space and seek out new worlds to inhabit. You’re going to encounter a range of varied planets along the way and harvest their resources.

Some planets hold terraforming resources you need to create a beautiful, harmonious new planet for yourself. Others only provide oxygen and ore to repair your ship.

The basic premise in Last Horizon is straightforward and challenging: you are a pilot of the last vessel of a fallen civilization who must travel the space and collect various resources. Once you have harvested enough terraforming resources, you can land on a new, habitable world. 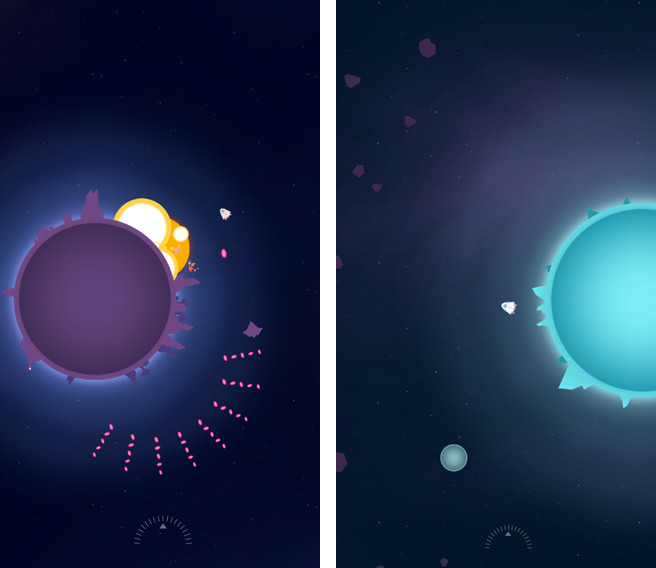 Landing on a planet’s surface requires skillful piloting. To make the game more interesting and challenging, you must carefully balance and manage your fuel and oxygen levels.

The game sports easily masterable control mechanics. For starters, tap anywhere in the lower-right to fire your thrusters.

And while floating out there, touch the left/right controls in the other corner to rotate your space vessel, much like in the legendary arcade video game Asteroids. At the bottom-middle is your radar that points in the direction of your inhabitable world. You can reverse controls in settings, if you like, and also mute music or both music and sound effects.

Though simple, the controls will take some getting used to. Maneuvering against your momentum is a core mechanic of Last Horizon, and then there’s accounting for the physics when landing and compensating for the gravity which pulls your spaceship to a planet.

On top of that, you must avoid landing on huge mountain spikes and oceans that will damage your spacecraft. Once you do land (not crash land) on a planet, the fuel and oxygen levels immediately begin to replenish.

The trick is trying not to harvest too much of terraforming resources or the planet will die and you risk incurring the wrath of sentient alien life. It’s all about balancing the need for resources without being too greedy!

Last but not least, if you encounter space-faring human survivors on a planet, collect them to boost your score.

Some planets have one or more moons orbiting them, which you must avoid.

I particularly like the little touches. For instance, a meteor occasionally shoots across the skies and you better not be in its way. Sometimes, you find yourself navigating through a meteor field. Other times, you could end up being sucked into a black hole if you’re not careful enough.

There are plenty of challenges and obstacles to avoid in this game that will keep your gray matter occupied, without even factoring in that your mind is constantly busy making mental notes of nearby planets and fuel and oxygen supplies.

As mentioned, Last Horizon is a minimal space survival game. This isn’t saying you’re in for pixelated bitmaps and retro graphics. Quite the contrary, Last Horizon tastefully renders stylized space objects and planets so you can instantly tell your ship apart from other objets, so there’s that. 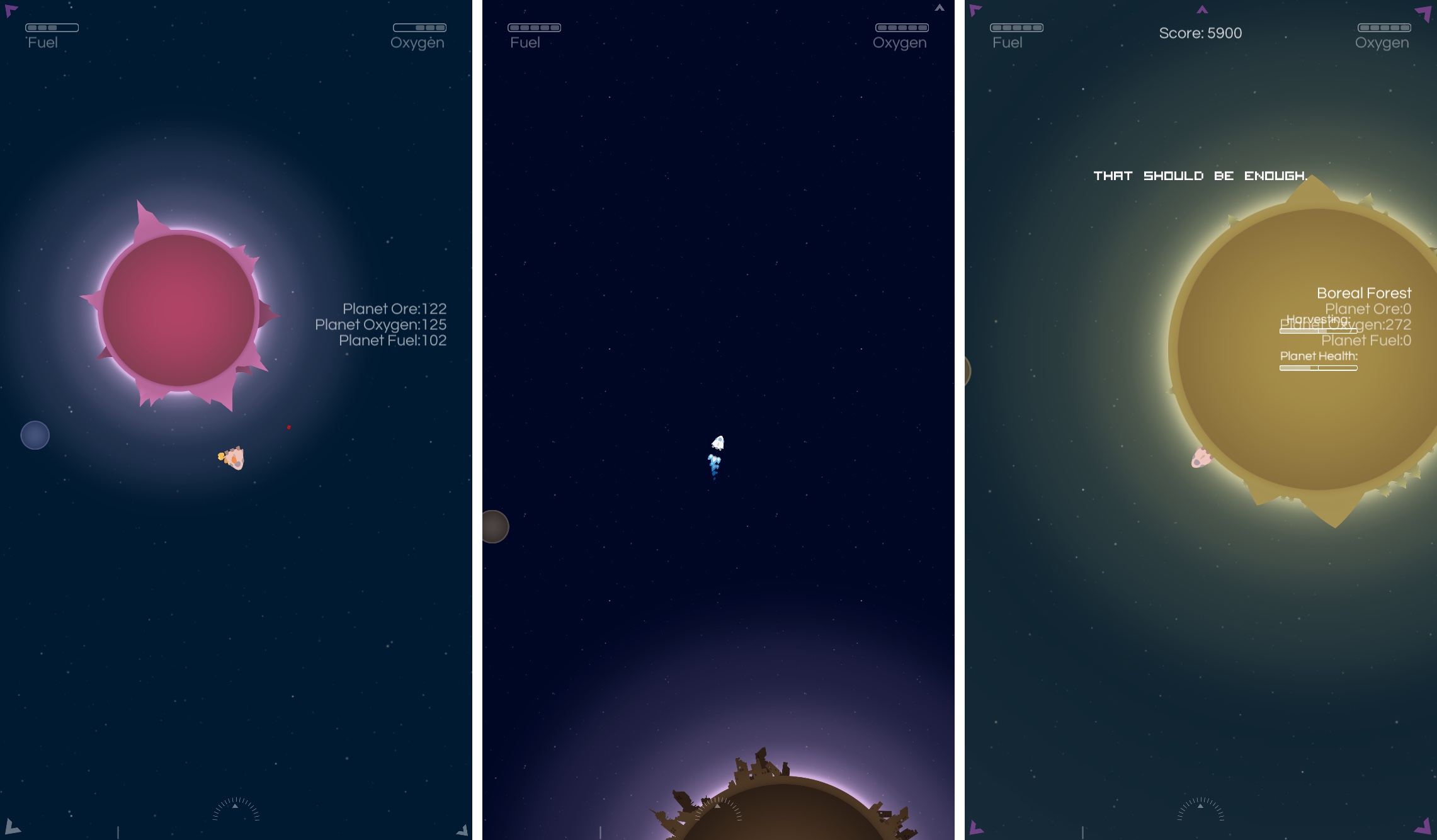 I definitely enjoyed Last Horizon’s deep ambient music that contributes to the wonderful, almost reverent feeling of being lost in the vastness of the universe. Best of all, the galaxies are procedurally generated so each time you play Last Horizon you’ll get to enjoy a different experience.

Last Horizon runs without any hiccups on my iPhone 6s. The graphics are nicely shaded, the atmospheric music fully immerses you in the game (please, use the headphones) and the animations are smooth and lag-free.

But if you find the control scheme too hard to master, then Last Horizon and similar arcade games just aren’t for you. Same goes if you’re looking for a fast-paced shooter with a bunch of orange explosions because Last Horizon isn’t it. 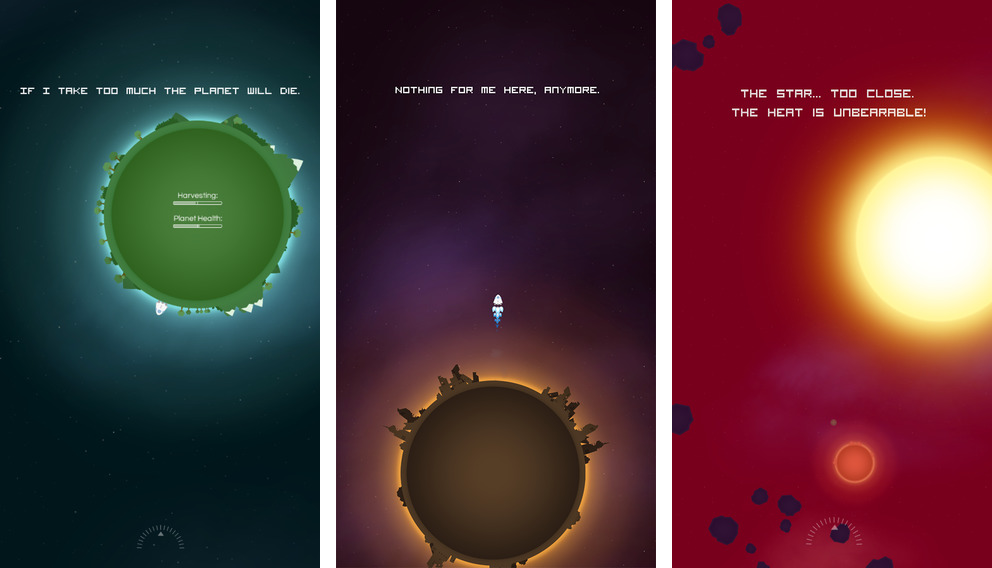 But if you value engaging gameplay with well-balanced controls and appreciate artful presentation, minimalist appearance and a moody soundscape—all wrapped up in a charming space-themed package—you are going to fall in love with Last Horizon.

In my personal opinion, this is a very well executed game, one that’s fun to play and challenging enough to keep you coming back for more.

If you like Last Horizon on the conceptual level, there are a few other games along the same lines that you might want to try out.

For instance, Wonky Ship is all about weaving, dodging, cussing, flipping out and rolling around “like you’ve never done in a video game before”. But consider yourself warned for this game requires top-notch precision and at times can be quite an exercise in frustration.

The gravity, the physics and landing on planets in Last Horizon remind me of Lunar Lander, an oldie that you’re wholeheartedly recommended giving a try.

Last Horizon, a 65.9-megabyte download, requires an iPhone, iPod touch or iPad with iOS 5.1.1 or later. The game supports Game Center leaderboards and achievements and does not contain advertisements or In-App Purchases.