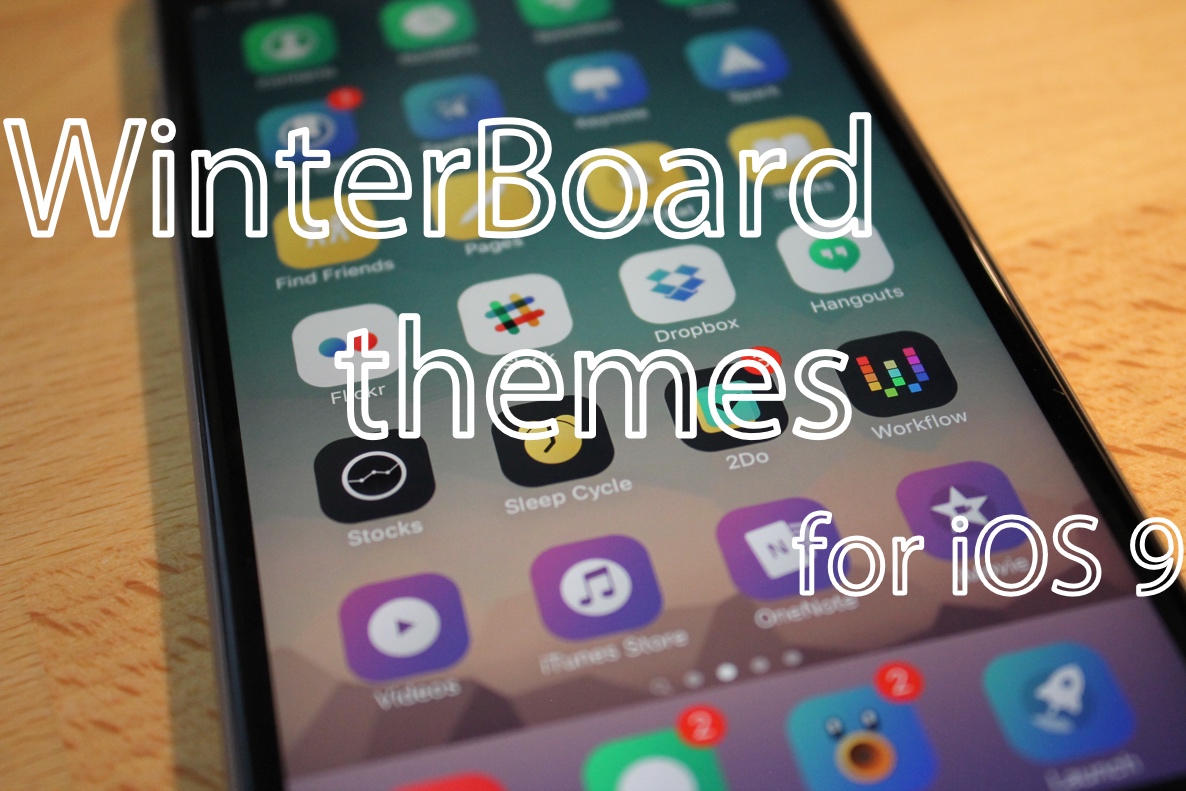 Theming has long been a part of the jailbreak community, with designers exercising their creativity by redesigning various elements of iOS. From icons to system glyphs, WinterBoard has the power to transform the aesthetics of the user interface on an iPhone or iPad.

With the release of iOS 9, designers have been updating existing themes and releasing new ones, many of which we’ve looked through to bring you some of the best Winterboard themes for iOS 9 in Cydia. While everyone’s visual preferences are different, here are some of the best-looking themes available, per your author’s tastes. 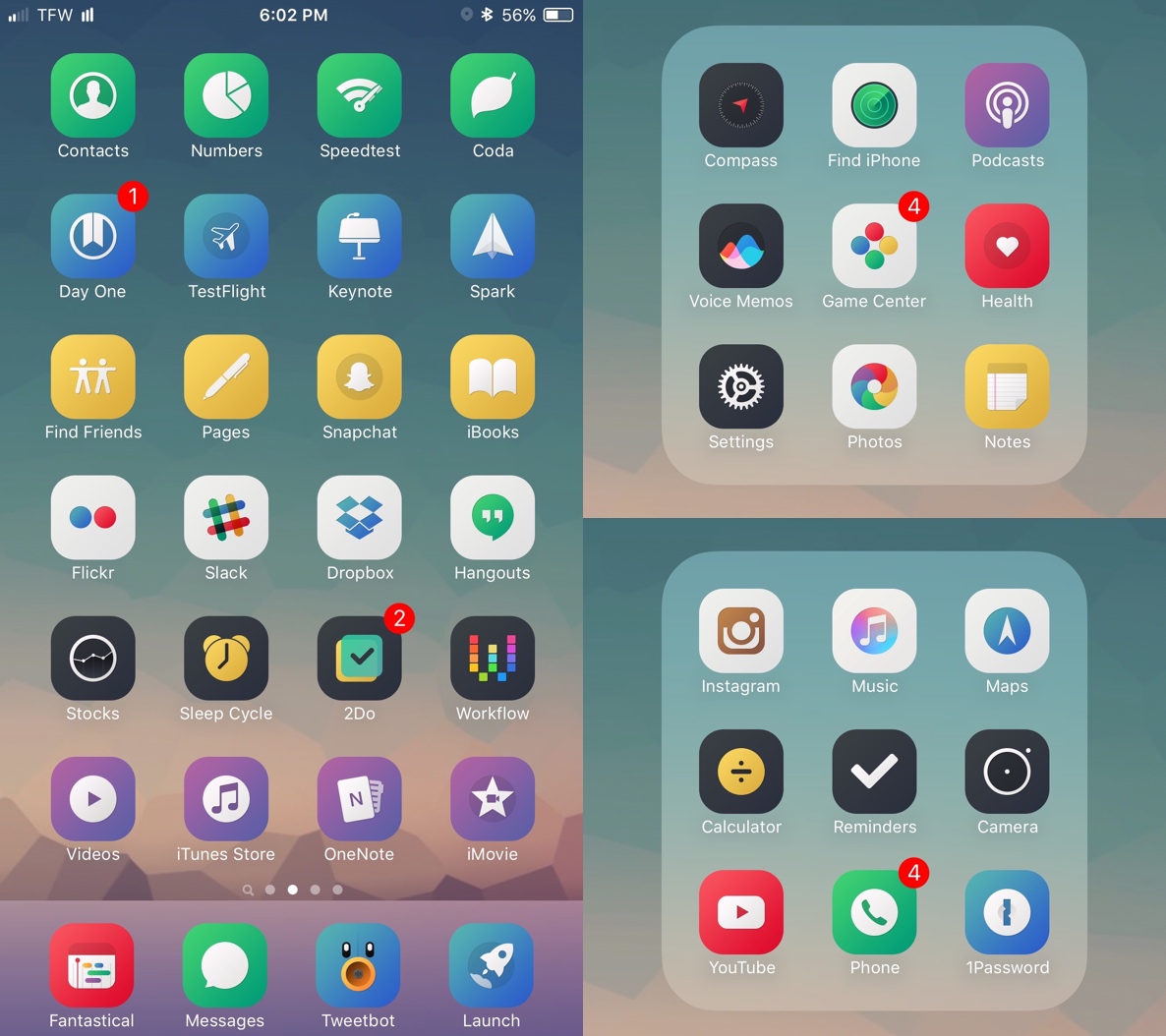 To me, the most outstanding thing about Veexillum is the uniformity it brings to iOS without making all the icons look boring. This is accomplished by using a few basic colors – white, black, blue, green, purple, and others – as backgrounds for the icons, with a logo or symbol unique to that app in the center. This strikes a beautiful balance between the wide variety of branding styles of various apps and the monotony of them all having the same basic color in a theme.

The range of background colors used helps to differentiate apps as well. For instance, iMovie and OneNote are examples of apps that keep the primary color of their official icons – purple – which makes them easy to find while still conforming them to the uniformity of Veexillum.

This theme is simple, beautiful, consistent, and unique, not to mention it has hundreds more icons than most themes out there, all working to make it one of my favorites – if not my top favorite – from this list. You can add Veexillum to your theme collection for $2.49, and it brings over 600 icons and a wide array of UI tweaks to all iPhones and iPads running iOS 7–9. 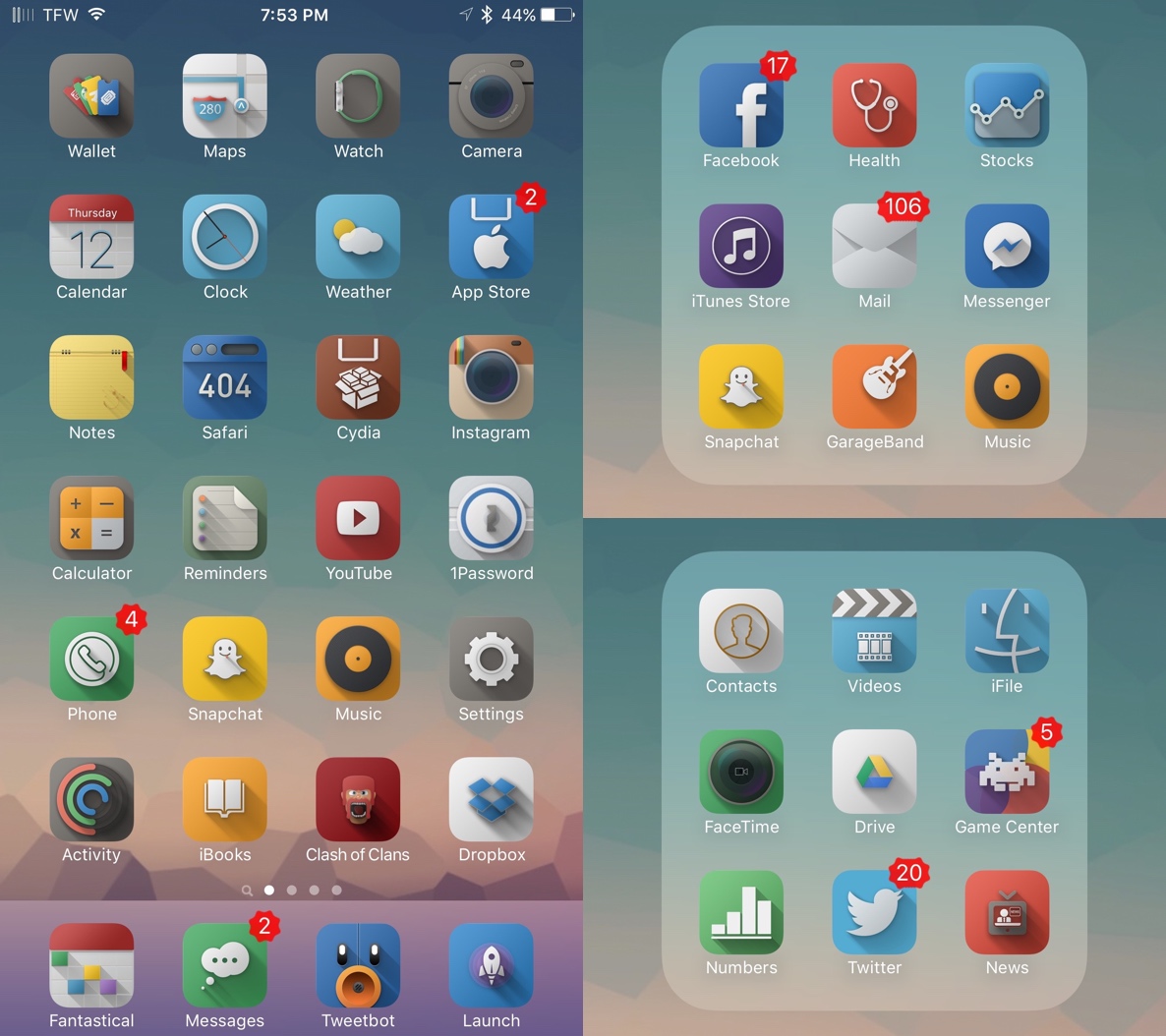 There are quite a few shadow-based themes available in Cydia, but none of them literally stand out like Flatish, which features icons containing multi-level layers that cast different levels of shadows. The result is fascinating to see and does wonders to help set this theme apart from others of its kind.

The issue with themes of this type – not just Flatish – is that app icons that aren’t themed won’t look so great next to custom icons with beautiful shadows. One solution to this is to hide unthemed icons with a tweak like Apex 2 until they become supported. Still, mismatched icons are always an annoyance.

That said, Flatish is a theme that will have you staring at your icons for unreasonably long amounts of time – the shadows are that cool and intricate. You can check them out for yourself for a $3.99 purchase, which includes support for iOS 7–9. 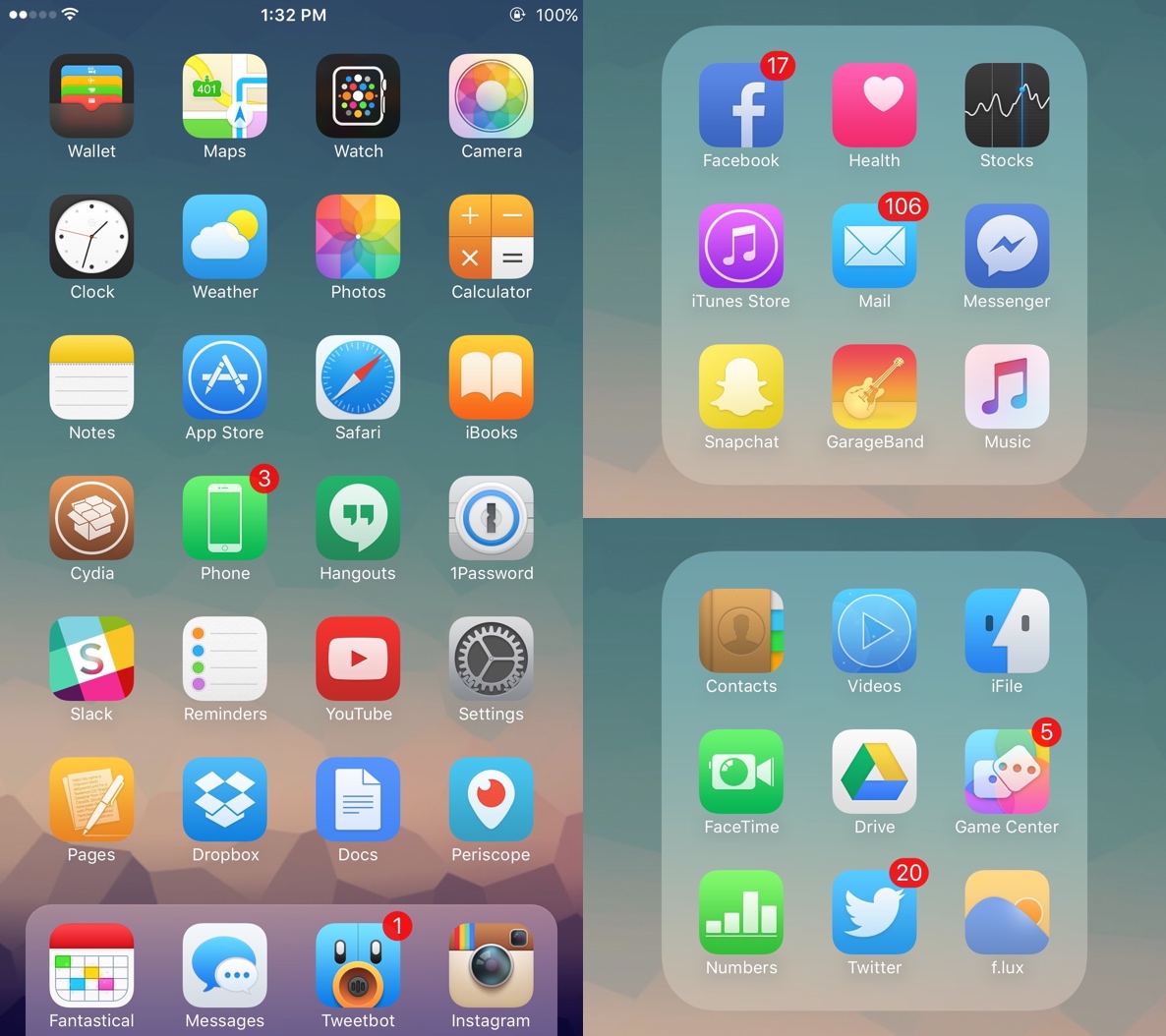 Anyone who has been on the jailbreak scene for very long at all has undoubtedly heard of ayeris, the theme I can only describe as “candied” because of its soft blurs and candy-like color palette. While it always takes me a little time to adjust to ayeris after installing it for the first time in a while, it’s one of the best looking themes that stays comfortably close to iOS’s stock design.

Of course, there is more to ayeris than just icons, as it modifies the Home screen dock as well as system glyphs and status bar icons, and it comes with a few tasteful wallpapers as well. If you don’t own it yet, ayeris for iPhone can be purchased for $3.99, with the iPad version sold separately. 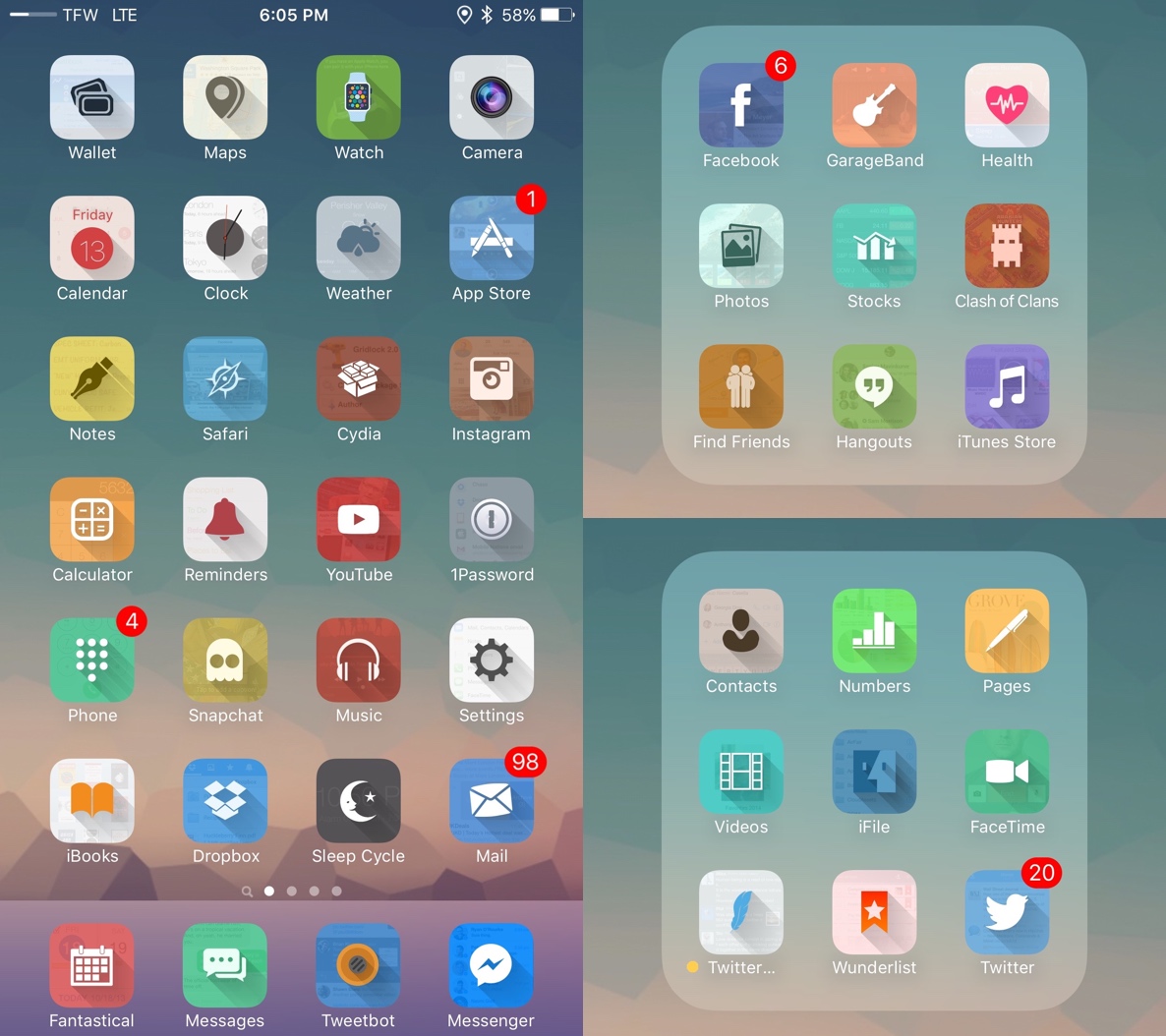 Another shadow-based theme, Amber is pleasantly unique in that it adds a subtle peek of the inside of an app to its icon with a faded screenshot, something for which I developed an appreciation after spending some time with the theme. The result is icons minimal enough so as not to be distracting but detailed enough for one to stop and examine more closely.

What I like about Amber is that it deviates from the traditional solid- or gradient-colored background of most app icons by added a tinted screenshot that truly adds a nice touch to the Home screen. The emblems centered on each icon are well-made and can be quickly recognized and associated with the app and its brand, if you don’t have time to read icon labels (or want to remove them altogether). Amber supports all recent iPhones and the latest versions of iOS, and you can pick up the theme for $1.99 in Cydia. 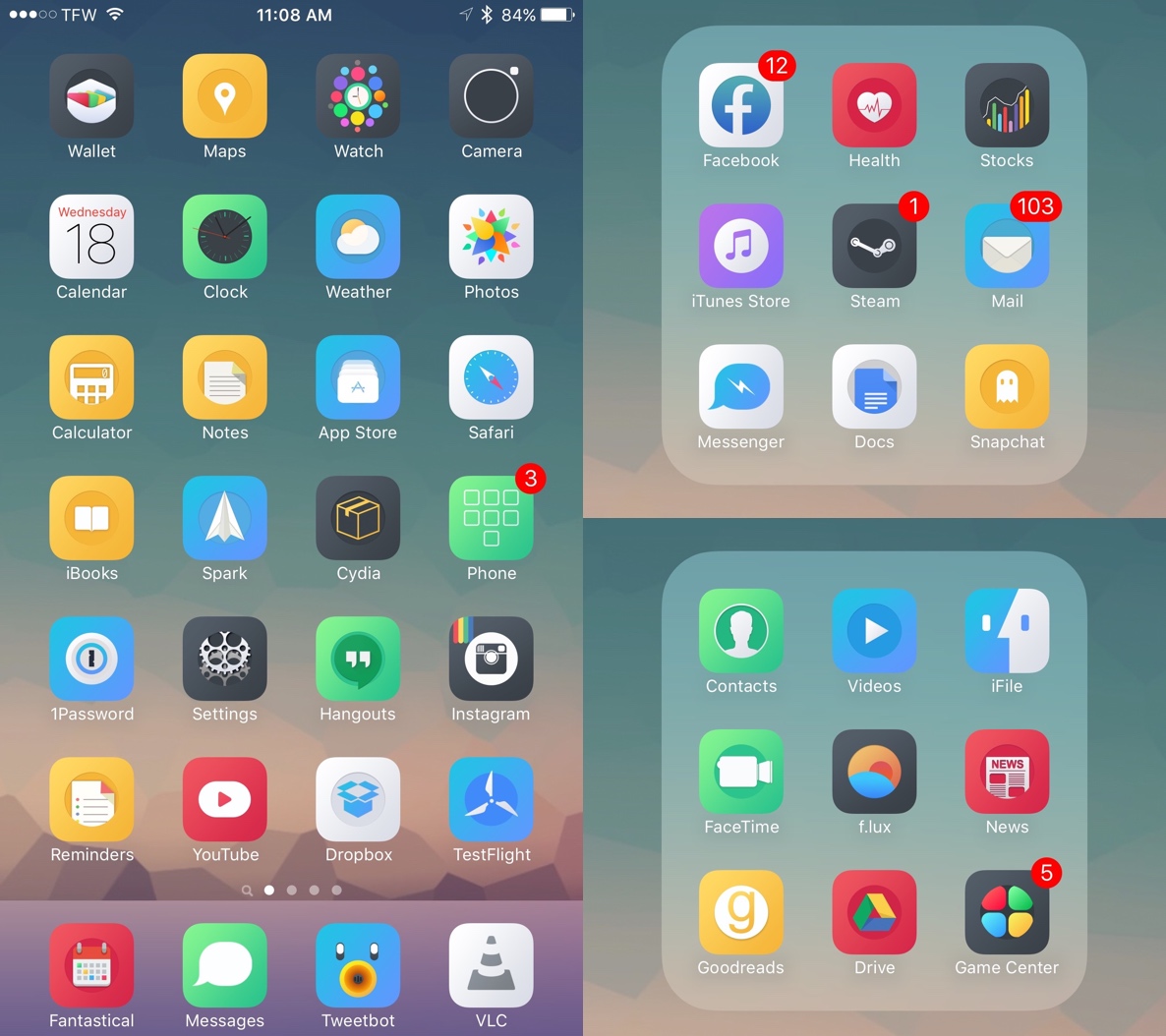 Out of the many themes I sifted through in preparation for this article, I was hard pressed to find one with better looking icons than Echo. Although it’s a small theme without a large number of themed icons, Echo is off to a great start with a beautiful color palette and well-made icon centerpieces. In fact, it may very well have one of the best Instagram icons I’ve seen in a theme, as other themes frequently cling too closely to the original Instagram design while simultaneously trying to flatten it and end up failing miserably.

As I mentioned, Echo is currently rather lacking in terms of the amount of revamped icons it contains, but I’m excited to see future updates with more icons themed in this general style, because I certainly appreciate what I’ve seen from it thus far. Echo definitely ranks among my top favorites from this list in terms of aesthetics, and you can own it for yourself and support future development with a $2.29 purchase. 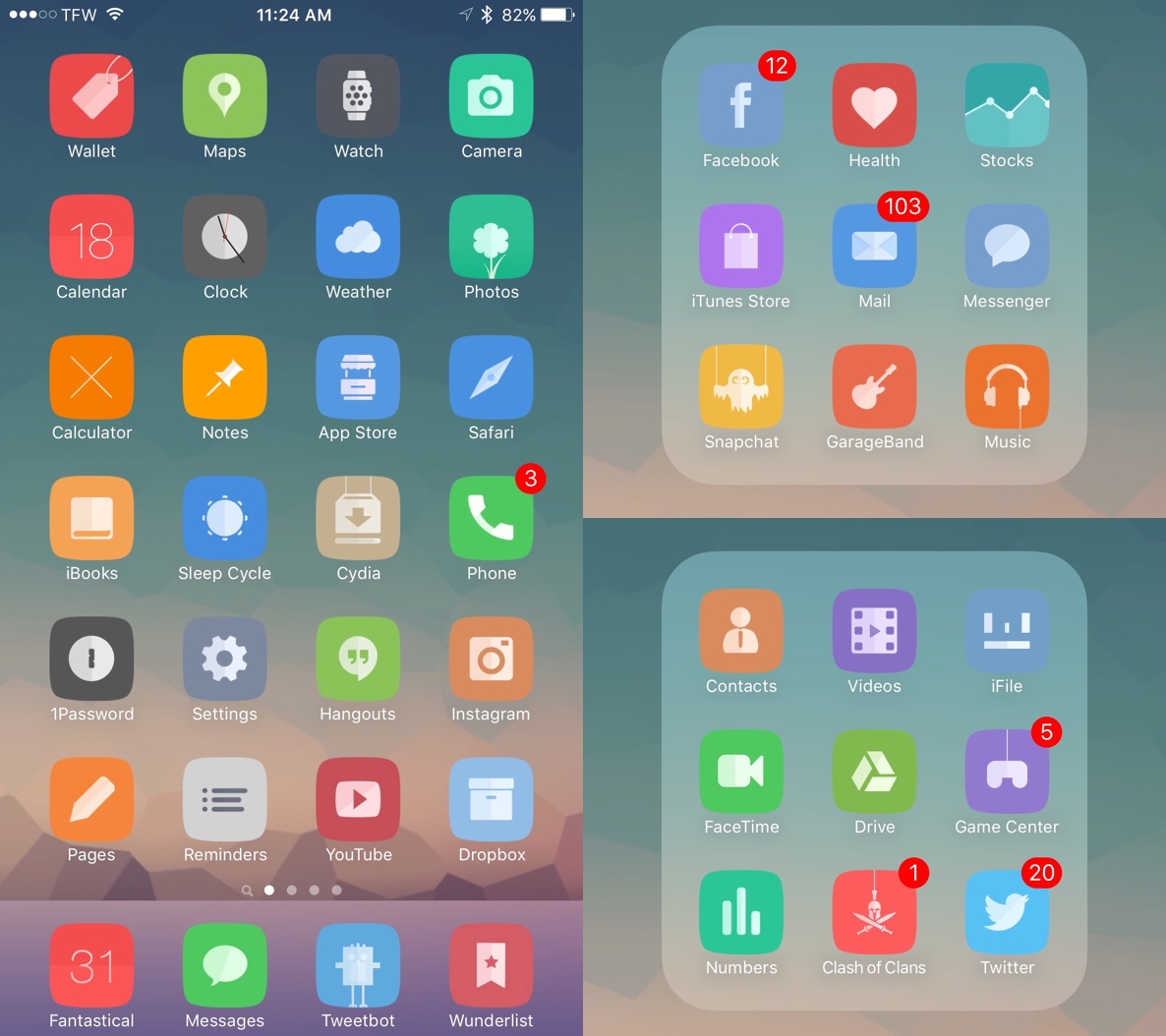 Themers looking for a minimal solution for their device should look into Amor, a simple theme with colors a tad too bright to be called pastel but still pleasing to the eye and reasonably diverse. The symbols on each app icon are tastefully done with designs matching the simplistic ideals conveyed by Amor, and most of the icons have a subtle but refined fold through them – with half of the symbol or background being slightly darker than the other – occurring either vertically, horizontally, or diagonally.

An issue with this sort of theme, as is the case with Flatish and similar designs, is that most unthemed icons are going to stick out glaringly next to the icons that conform to Amor’s visual cues. Again, this can be solved with Apex 2, but anyone strongly opposing a lack of uniformity should take note. That said, this theme is excellent for a minimal, flat look and could help to create a simple UI in collaboration with jailbreak tweaks for altering the iPhone’s interface. Amor can be picked up in Cydia for $1.99. 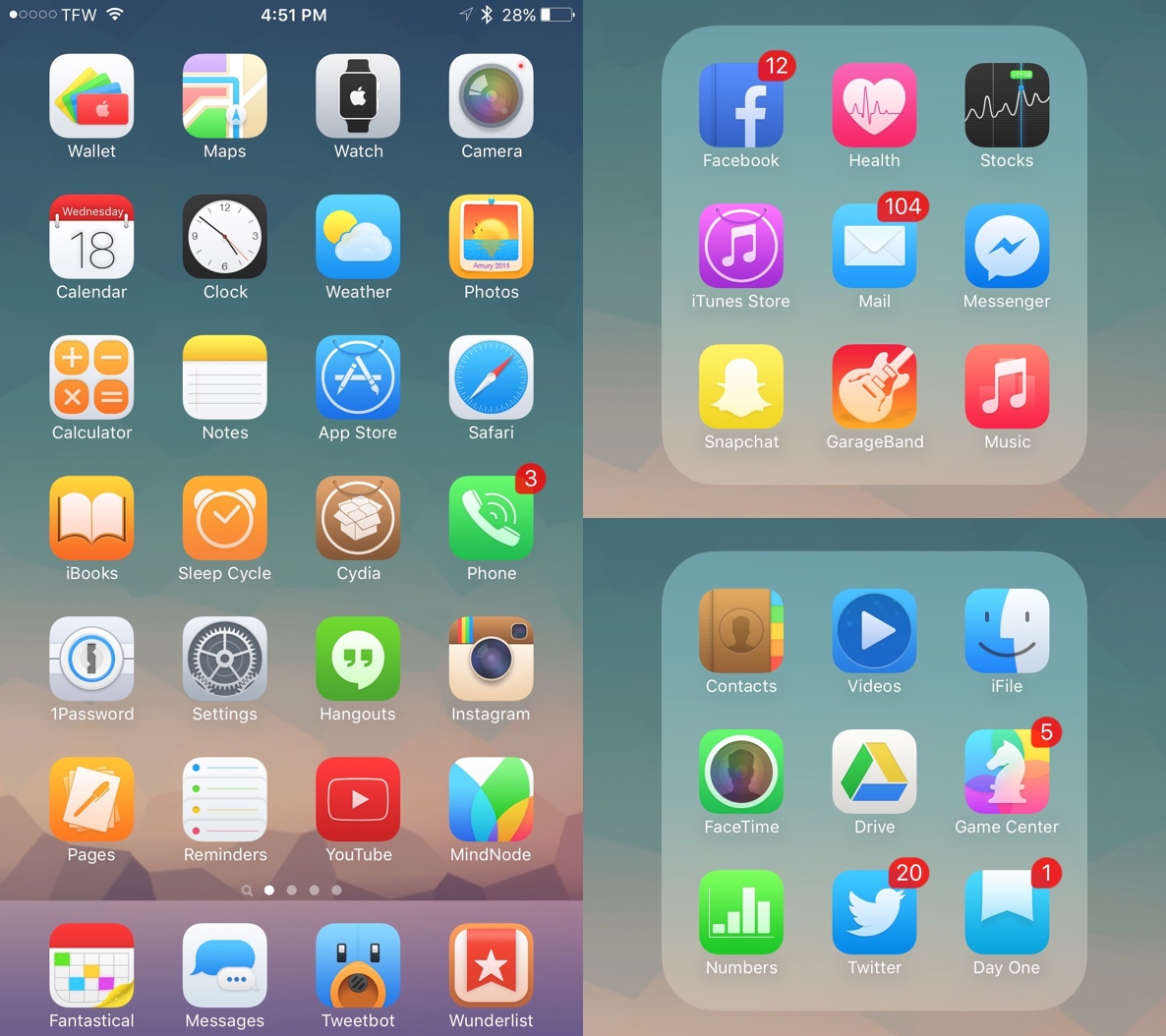 Following the aesthetics of iOS without too much of an alteration in design cues, Amury is a great solution for blending themed icons with non-themed ones. Even though it doesn’t stray very far from the traditional iOS look, many of the redesigns in Amury are welcome improvements and fresh new looks at old icons.

Besides looking nice on the Home screen, Amury does a great job redesigning icons within Settings and theming various UI elements, and it comes with several alternative icons, many of which I like better than the default ones you see above. But perhaps my favorite property of Amury is how it redesigns icons while retaining a native iOS look and blending with unthemed icons. You can add Amury to your collection for $3.49.

While this isn’t an exhaustive list that takes every iOS 9-compatible theme into account, quite a number of themes have been looked through before arriving at this list of my personal favorites.

My current setup uses both Echo and Veexillum simultaneously, as the design paradigms are similar, with Veexillum making up for Echo’s lesser amount of themed icons. What’s your favorite theme from this list, or what theme do you consider to be the best all time?

If you’re a theme designer and would like your work to be considered for future reviews, simply add your theme to Cydia ID #464563278 and let me know about it by sending an email to timothy@idownloadblog.com.