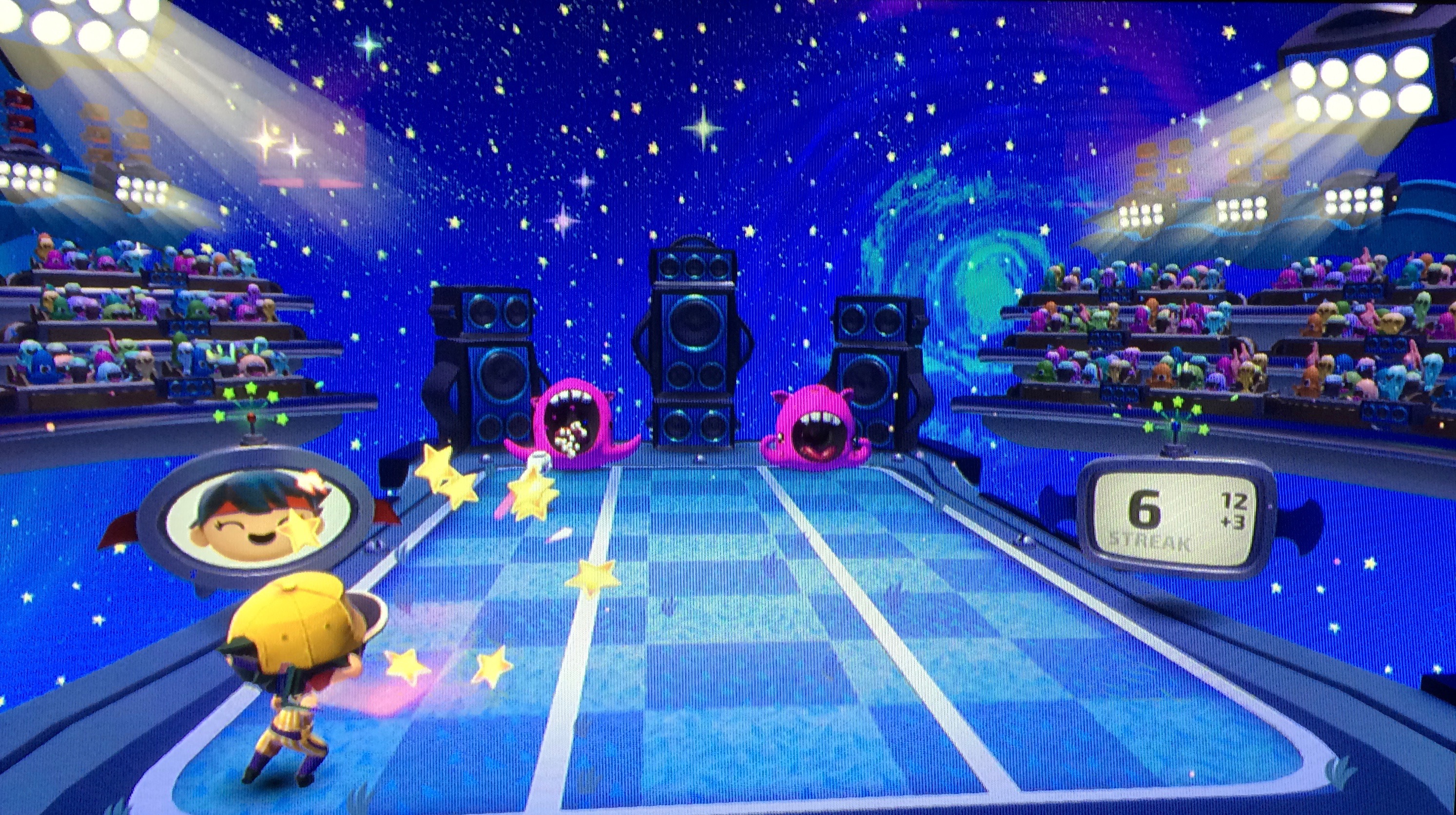 With the fourth-generation Apple TV now available, we are getting a glimpse at the types of apps and games that are being developed for our living room. One surprising addition to the gaming world comes from Harmonix (creators of Guitar Hero and Rock Band).

Beat Sports is a rhythm-based sports game. Players use their Siri Remote control as a sort of Wii style motion-based remote to swing away at oncoming balls. We’ve got a full game review of Beat Sports for your reading enjoyment.

Similar to rhythm-based games in the genre, players earn points by swinging their bat, racket, or club at a specific moment in time based on the notes played in a song. Instead of tapping a screen or hitting a button, players actually get to swing their Siri Remote to the beat.

Since the Siri Remote has motion-sensing capabilities, it tracks when you swing at a ball. It is similar to Wii Sports in that you can use the remote to trigger an action. However, it is much more limited. It doesn’t sense the speed or strength of your swing, merely the moment that you perform the action. In this way, it is more similar to Guitar Hero.

The game is designed with cuteness in mind. Seriously, with its giant head and tiny feet, your slugger looks like something that was created for the Power Puff Girls. The aliens on the opposite side of the playfield are usually gelatinous blobs or one-eyed monsters that probably attended Monsters University at some point.

The colors are bright and the graphics are cartoonish. The soundtrack is beat heavy, since you need to swing to the rhythm

The game starts off in a “Net Ball” arena. Players are one of a team of doubles with the other teammate and opposing side being non-player characters. Swing the remote in time with the song right when the ball is about to pass you by.

Swing may be too strong of a word. I actually got a little sore the first night I played this game (just like I did the first time I played Wii Sports) because I was swinging too big. It turns out you can get the same effect from flicking your wrist as you can from a full swing.

The goal is to earn the most points by not missing the ball. You receive penalties for swinging early or late. At the end of the round (and song), your points are tallied up and you receive a medal based on your performance.

The better you score, the more you add to your gift meter, which is used to unlock new items. You don’t get to choose the item, but it does make you feel successful whenever you unlock a new hat or bat.

The second game available is called “Whacky Bat.” In this mode, players have to incorporate swiping the Siri Remote’s touchpad along with swinging in order to hit pitches in different lanes. Here, I found the remote to suffer from serious issues recognizing my swings versus my swipes. I often times swiped into a different row when the only action I performed was a swing. This made for a very frustrating game as I know I could score higher if it weren’t for the control issues.

The third game is called “Hangry Holes.” In this mode, players don’t swing at all. Instead, they swipe either up, right, or left, on the Siri Remote’s trackpad in order to hit balls into the mouths of singing aliens that pop up out of the ground. Again, I found the remote to suffer from complications. It sometimes wouldn’t register my swipe at all, or if it did, it would send the ball in the wrong direction.

Some of the remote issues are clearly user error. I can admit when I need to practice more. However, there were times when the controller just didn’t do what it was supposed to.

There is also a multiplayer mode where you can add up to three additional players to the game. Don’t worry, they don’t all have to bring over their Siri Remotes if they want to play. Instead, they can download the free Beat Sports remote app, which turns their iPhone into a controller. The main player uses the Siri Remote, while the other players use their iPhone.

I also had issues playing with my iPhone in multiplayer mode. I handed the Siri Remote off to my opponent whom, and I mean no disrespect, can’t play games worth a lick. So, the fact that he beat me every time we played made me suspicious of the iPhone remote’s abilities. I believe it suffers from serious lag issues.

Once you’ve played three games in each mode at Home, you can unlock Away games, and then Far Away games. If you score at least a bronze medal in all levels, you’ll unlock Pro Mode. I haven’t made it that far in the game yet, but I can only imagine it is really hard to play when the controller doesn’t work properly. 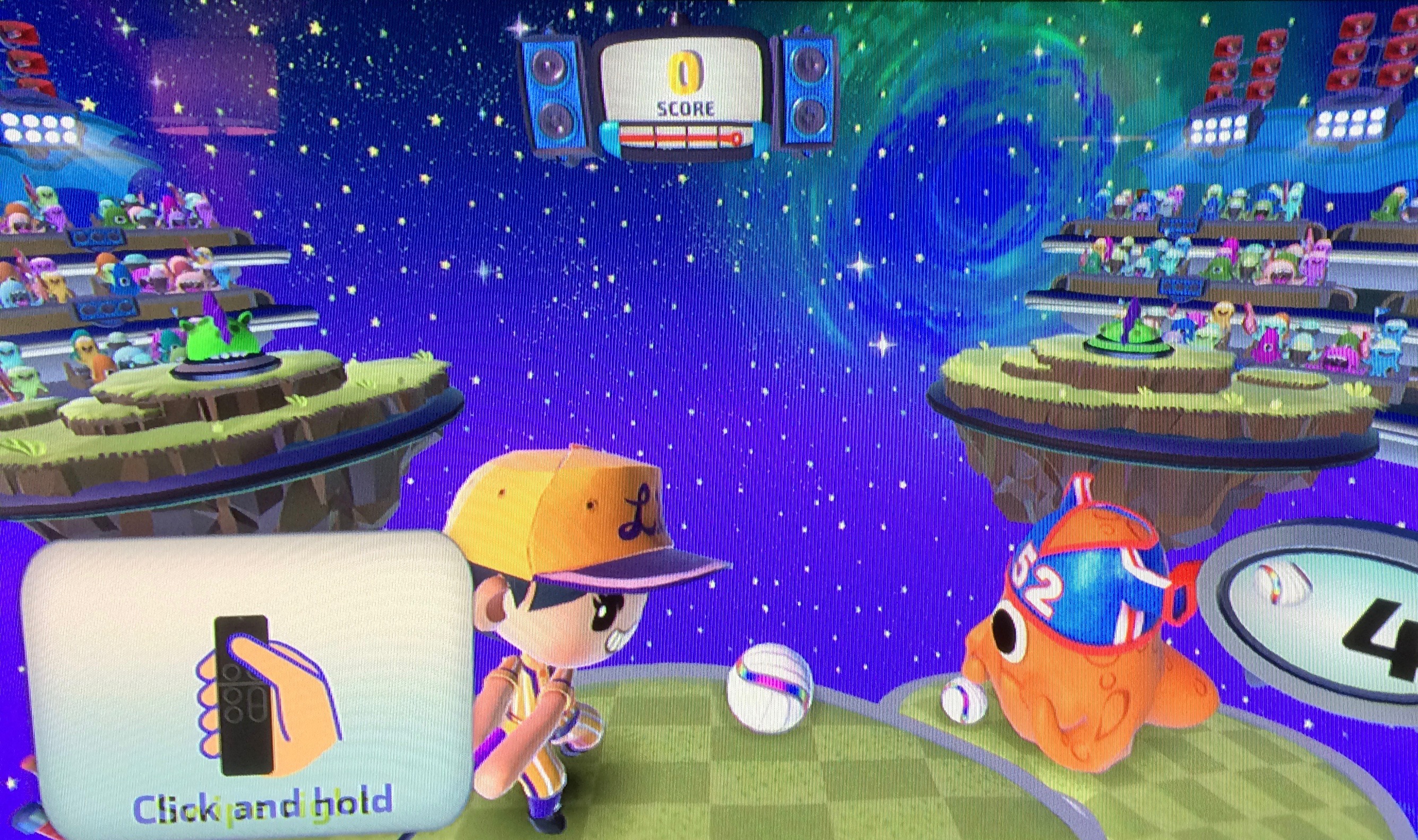 This game is really fun, despite its controller limitations. The Net Ball seems to work fairly well, although there is a slight lag in audio and controller connection. I love being able to play motion-sensing games on my Apple TV.

The mechanics are nicely built. Each game mode is harder than the previous, and each round within a mode is harder, too. Building up your skills based on practice is important.

The lag, misinterpreted readings, and missed actions of the controller are a serious problem, and potentially the game’s downfall if something isn’t done to improve the technology.

Beat Sports costs $9.99. If you consider this to be an early version of the type of games that are possible on Apple TV, then this is a good game in its infancy. The price would absolutely be reasonable if the game worked the way it is supposed to. However, in its current state, you would be taking a major risk downloading it at such a premium price.

I recommend holding off on buying this game simply because of the controller issues. It is so frustrating to play in its current state that you might feel like giving up. The game’s development team has already pushed out an update within about a week, so it is highly likely that regular updates will be made available to squish bugs and fix the remote issues. So, with the next major update, I’d say grab it if you like motion-sensing games like Wii Sports. You can download this game from the App Store on Apple TV.