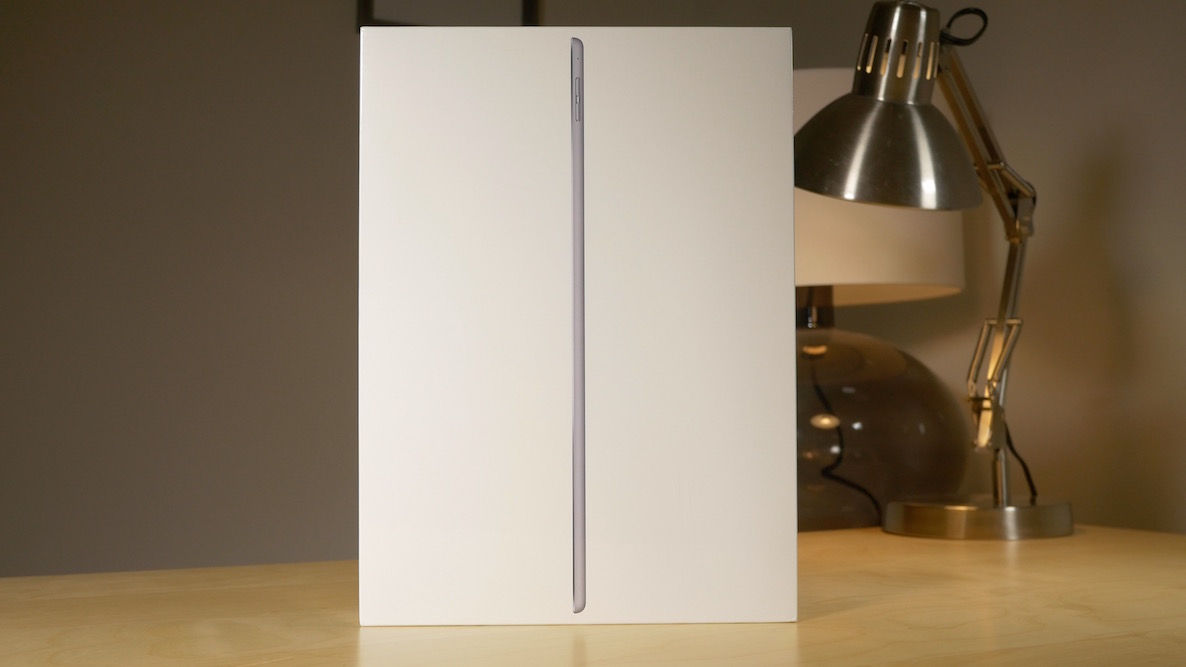 I never thought I’d want an iPad Pro. Out of all of the products that Apple was rumored to launch this year, the iPad Pro was at the absolute bottom of my totem pole.

That began to change somewhat after Apple’s most recent keynote, and it completely changed once I was able to actually go hands-on with the super-sized tablet at my local Apple store.

The iPad Pro isn’t for everyone, but it’s less of a specialty device than many might have expected…

Unfortunately, I’ve not been able to log any extended time with what is arguably the iPad Pro’s most convincing selling point—the Apple Pencil.

Since I wasn’t distracted by the Apple Pencil, I’ve been forced to use the iPad Pro in the traditional iPad way. By that, I mean consuming a lot of content, and playing lots of games. Ironically, the lack of an Apple Pencil has convinced me that the iPad Pro is more than capable of transcending its “Pro” boundaries and vaulting into the mainstream.

Obviously, the iPad Pro is very good for making content. It packs some serious power under the hood that rivals some laptop machines, and it has me downright excited about the future of this platform.

But even as a straight up consumption device, the iPad Pro is a compelling product. It’s so big, and features sound that’s so good, that it fights for and usually wins your attention. It makes the iPad Air 2 feel downright small and insignificant. It makes the iPad mini feel more like a toy.

The iPad Air 2 was already crazy fast, but the iPad Pro is even faster and features double the RAM. There aren’t too many apps available right now that push this device performance-wise, but you can rest easy knowing that it’s got a huge ceiling for growth, and will probably be around for a very long time into the future.

Benchmarks have already shown how the iPad Pro compares to some MacBooks sporting Intel processors, and the comparisons aren’t pretty if you’re Intel. Apple has been touting its “desktop class” architecture for a few years now, but this is the first device that I believe truly lives up to that claim. 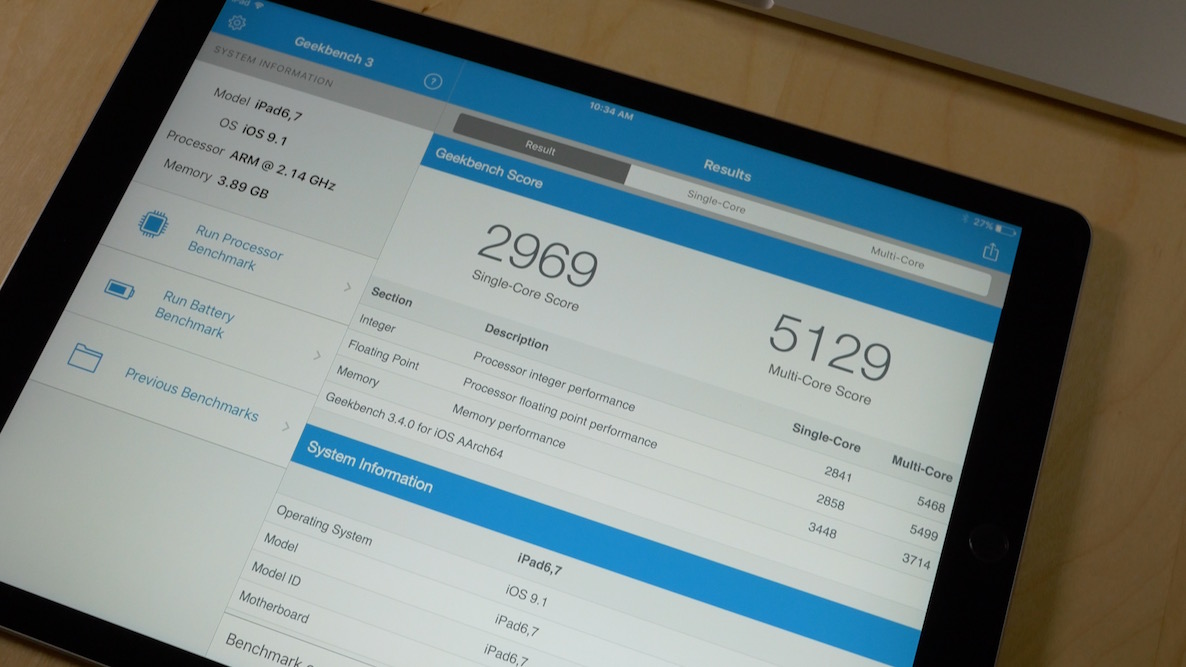 For example, the iPad Pro can edit three simultaneous streams of 4K video at once. Many laptops would choke when trying to edit a single 4K clip, let alone three. And when you factor in the device’s lack of a noisy fan to keep things cool, then its performance capabilities become all the more impressive.

I think that the iPad Pro has the potential to become a serious platform for creatives in general. Not just graphic designers who skillfully wield an Apple Pencil, I’m talking photographers, videographers, podcasters, and similar creatives.

The 12.9” display boasts a resolution of 2732-by-2048, for 264 pixels per inch. That’s a far cry from the iPad mini 4’s 326 pixels per inch, which, in my opinion, still sports the best looking display in the lineup. That said, the size of the iPad Pro’s screen is big enough that it still easily impresses.

12.9” may not seem very big in a world filled with 13” and 15” laptops and 27” desktops, but you really don’t understand how large and immersive this display is until you hold it for yourself. 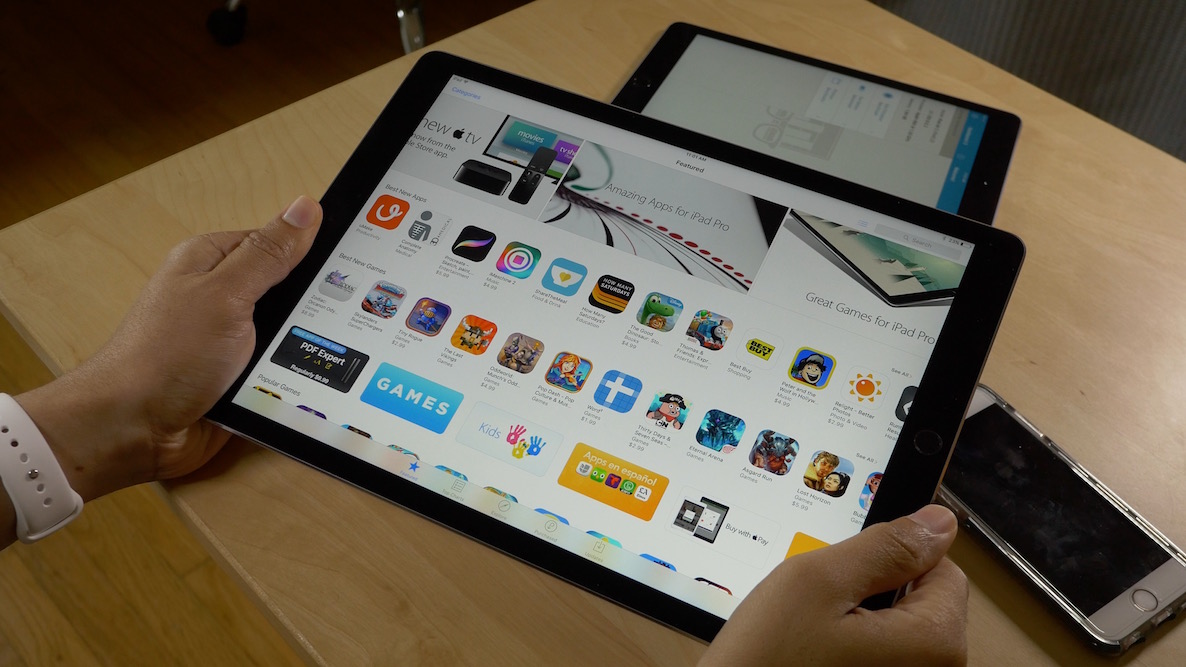 The iPad Pro, as I stated in my initial hands-on impressions, is huge. I’m serious, the screen is massive, almost comically so. The reaction to the iPad Pro reminds me of how people used to react to those big Samsung phones when they first started arriving on the scenes. People will eventually get used to having large tablets like this, but prepare for a few chuckles along the way.

Two areas, in particular, heavily benefit from the iPad Pro’s monster display. First of all, Apple can fit a full sized software keyboard on screen when using the Pro in landscape mode. This makes typing translate almost 1:1 when coming from a MacBook.

Secondly, the iPad Pro’s Split View mode, the feature in iOS 9 that brings true side-by-side multitasking to the fore, reaps major benefits from the added real estate. It results in two apps running side-by-side that each have a footprint that’s only slightly smaller than a full screen app running in portrait mode on an iPad Air 2. In other words, it’s basically like having two iPad Air 2’s running two different apps side-by-side. 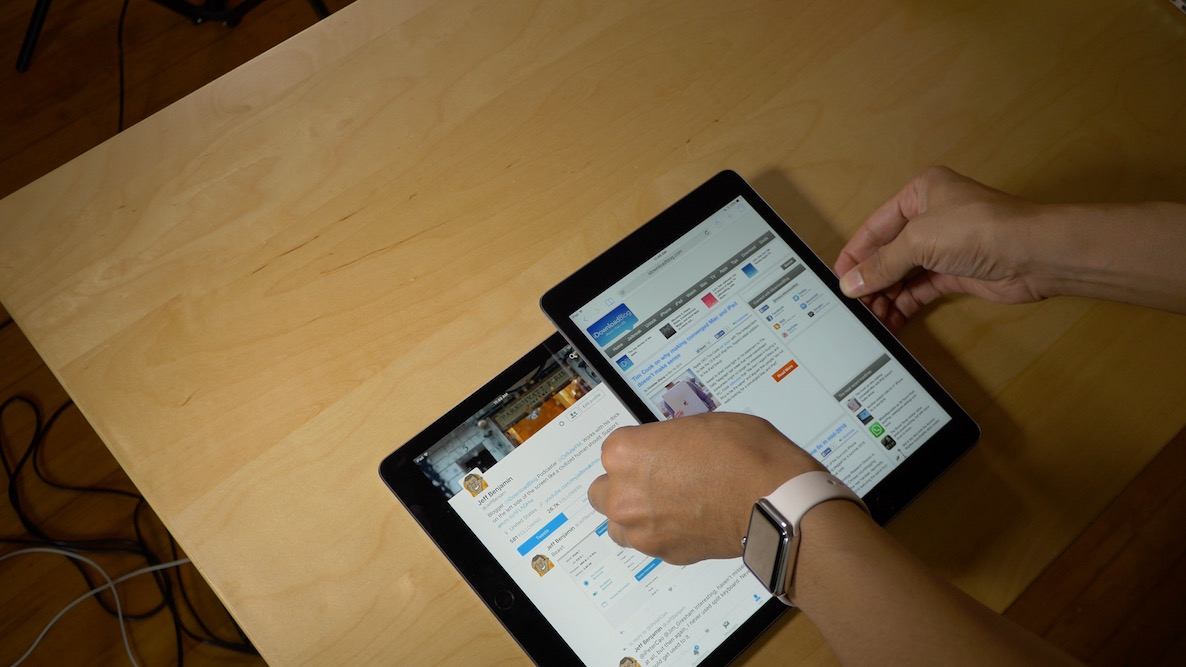 These two features alone make the iPad Pro more attractive to people who use their iPads to get real work done. Multitasking is no longer just a cute feature that can come in handy from time to time, but it’s a real staple of the device, a feature that was seemingly designed with the larger iPad Pro in mind.

Gaming can be amazing on the iPad Pro, especially for games that have been optimized for the larger screen. In my opinion, the iPad Pro can thrive as a game machine. It can be a portable machine, and a legit console at the same time when paired with a Bluetooth controller.

The first time that I played Asphalt 8 on the iPad Pro, I had a grin on my face from ear to ear. It’s not something that can easily be understood without trying it for yourself, but the large screen can fully encapsulate your field of view like nothing else outside of a VR headset.

And it’s not just the display, either. The speakers on the iPad Pro, four speakers in all, are as loud as all get out. It results in an immersive experience that’s unrivaled by any other iPad in the lineup. 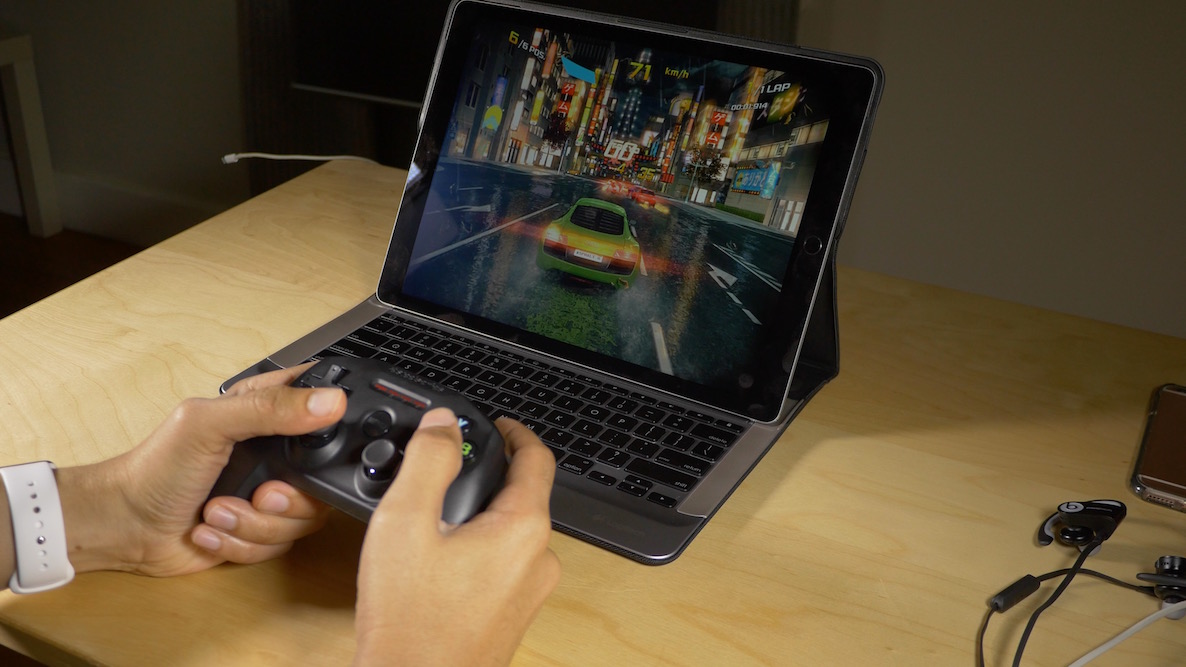 The iPad’s weakest link, from an immersion perspective, has always been its sound output capabilities. The iPad Pro is the first iPad to change this.

Movies sound ridiculously good with the balance stereo speakers, music sounds amazing, and games can pull you into the moment like never before. I’d say that the sound from the iPad Pro is on par with a cheap stereo Bluetooth speaker setup. It doesn’t have the low frequencies that can make it replace a serious speaker setup, but the sound quality is unequivocally better than any other iPad before it.

Of course, getting this much screen and power into a single device necessitated compromises. The iPad Pro is very heavy at 1.57 pounds, and difficult to hold in hand for long periods of time without propping it on something. This is amplified when using it in portrait mode due to the height to weight ratio. 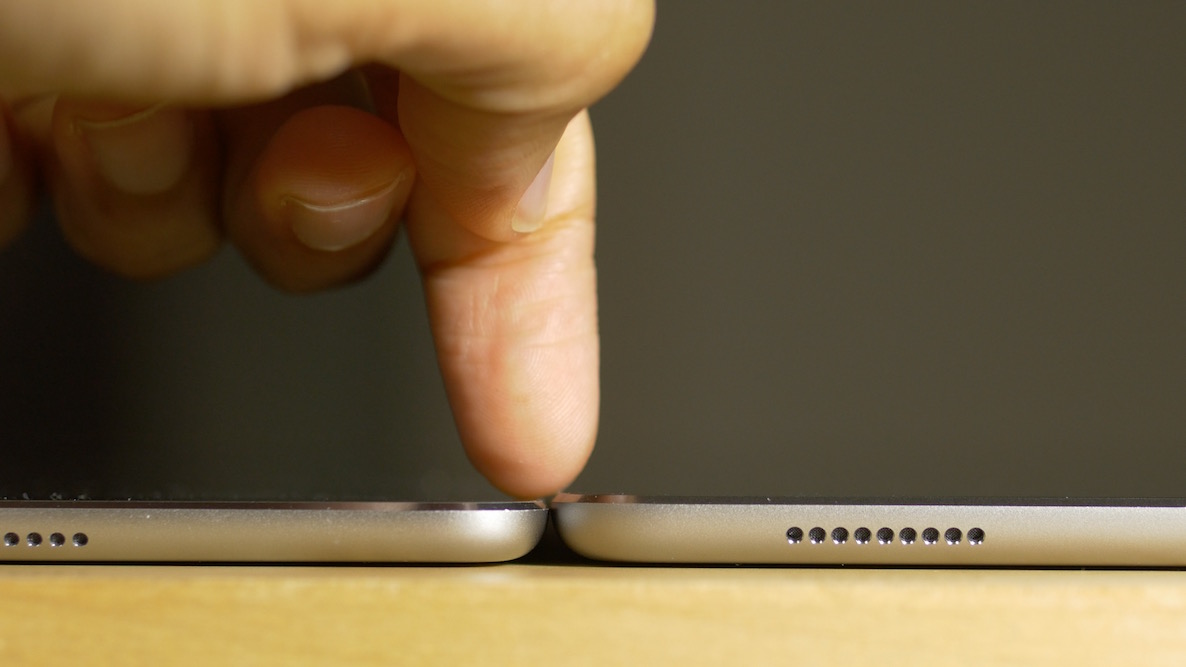 The iPad Pro isn’t much thicker than an iPad Air 2, but the sheer size of the device makes it a little unwieldy when carrying it around. It’s possible to be low key and discrete with an iPad Air 2, but there’s simply no way to conceal an iPad Pro, it’s way too big, and it will absolutely be noticed.

The iPad Pro has a lot going for it, but it still features some frustrating bottlenecks. I don’t expect the iPad Pro to replace my MacBook, but I do expect it to be the best iPad that it can be, and several things prevent it from being that.

Another big shortcoming is the lack of the ability to power many USB devices like microphones, external hard drives, etc. For someone like me, who records and edits podcasts and videos, not having the ability to quickly attach a microphone or an external drive continues to be a major pain point.

I’m also disappointed that the iPad Pro lacks the ability to shoot 4K video, especially for a device that can handle editing such video with ease. You’re really going to need an iPhone 6s or a camera that’s capable of shooting 4K in order to take advantage of the editing power of the Pro. Fortunately, I have both, but it would have been better if the iPad Pro was designed to shoot 4K video natively.

Things to keep in mind

If you’re going to buy an iPad Pro, don’t settle for the 32GB model. 32GB for a device of this type is much too small. Remember, there is no upgrading the iPad’s storage capacity, and for a tablet this expensive, you don’t want to have regrets several months down the line. This tablet is geared towards creativity, and as such, you’ll need the room to grow.

Obviously, you’re going to want a Silicone Case and Smart Cover combination, or at least some sort of protection, even if it’s third-party case. I’d personally recommend skipping out on the keyboard for the time being unless you happen to do tons of typing on a regular basis, and wish to use the iPad Pro in lieu of your MacBook. In fact, I suggest trying your best to become adept to the software keyboard. Remember, it’s much bigger this time around and closely mimics the hardware keyboard of a MacBook. Try to become proficient with the on-screen keyboard, and it’ll result in a device that’s much more portable. 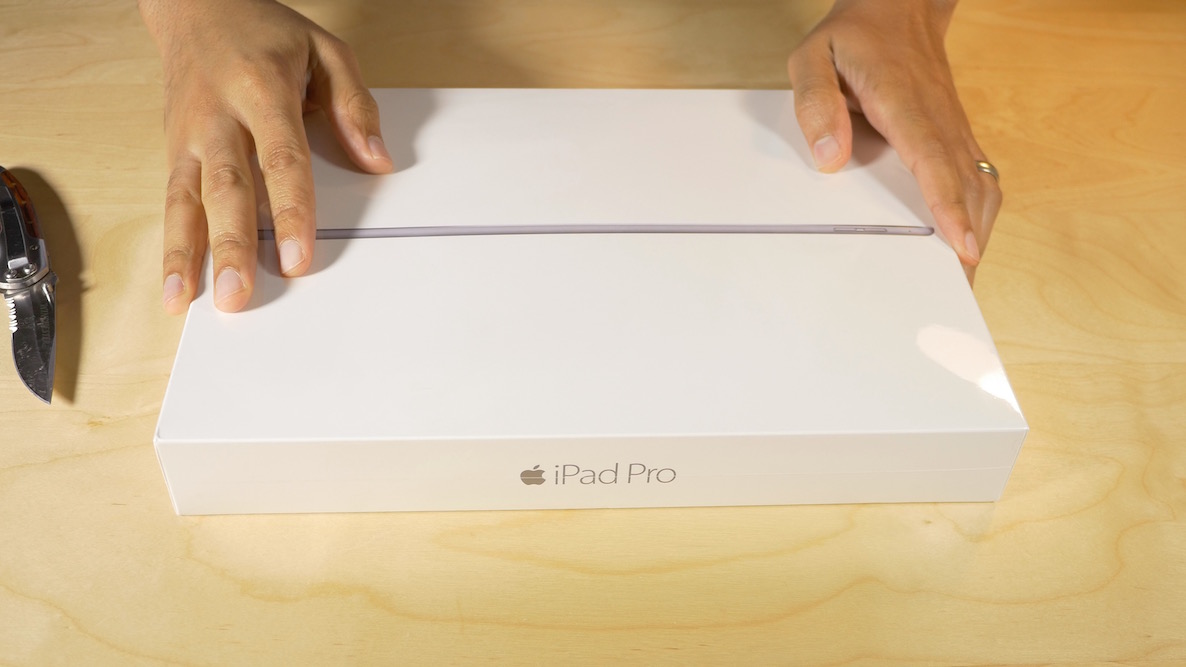 The iPad Pro is a significantly better tablet than I thought it would be. It transcends the so-called professional demographic, and can appeal to almost everyone—gamers, readers, creators, movie watchers, and more. It’s an iPad, but much bigger, with way better sound, and way more power. And you know what? That sounds like a pretty good thing to me.