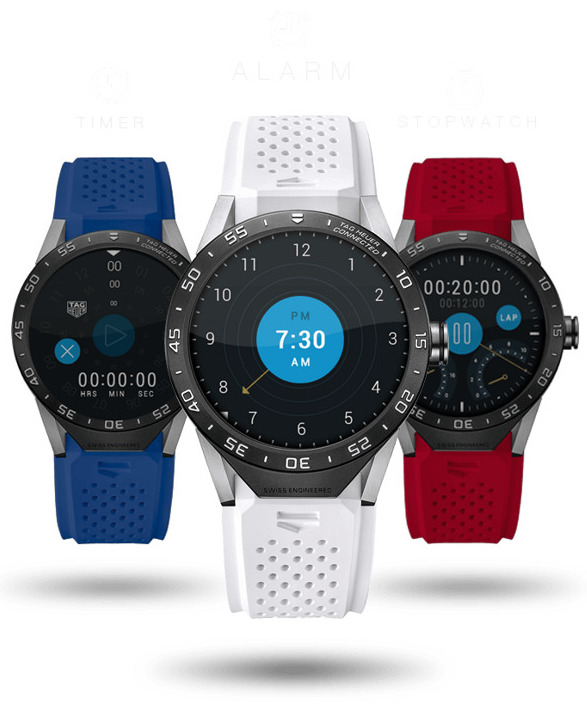 Tag Heuer, a Swiss watch maker, announced at today’s event in New York City a brand new smartwatch that its outspoken CEO Jean-Claude Biver claims has “almost the same features as an Apple Watch”. Marketed under the Connected moniker, the $1,500 titanium-clad 46mm device is powered by Google’s Android Wear software for smartwatches, delivering “micro apps” to your wrist.

It has a classic design and Tag Heuer is offering a selection of six colorful bands (black, white, green, blue, orange, yellow and red). The watch is priced at $1,500.

Based out from La Chau-de-Fonds, the cradle of Swiss watchmaking in the middle of Alpine pastures and mountains, Tag Heuer has officially become the first Swiss watch vendor to officially make a smartwatch in partnership with Google and Intel.

Inspired by its classic Carrera watch (an auto racing timepiece that dates back to 1963), the Connected features an almost unchanged titanium case and sports a sapphire crystal-coated 1.5-inch circular LTPS LCD touchscreen display with a 360-by-360 pixel resolution and a pixel density of 240 PPI. 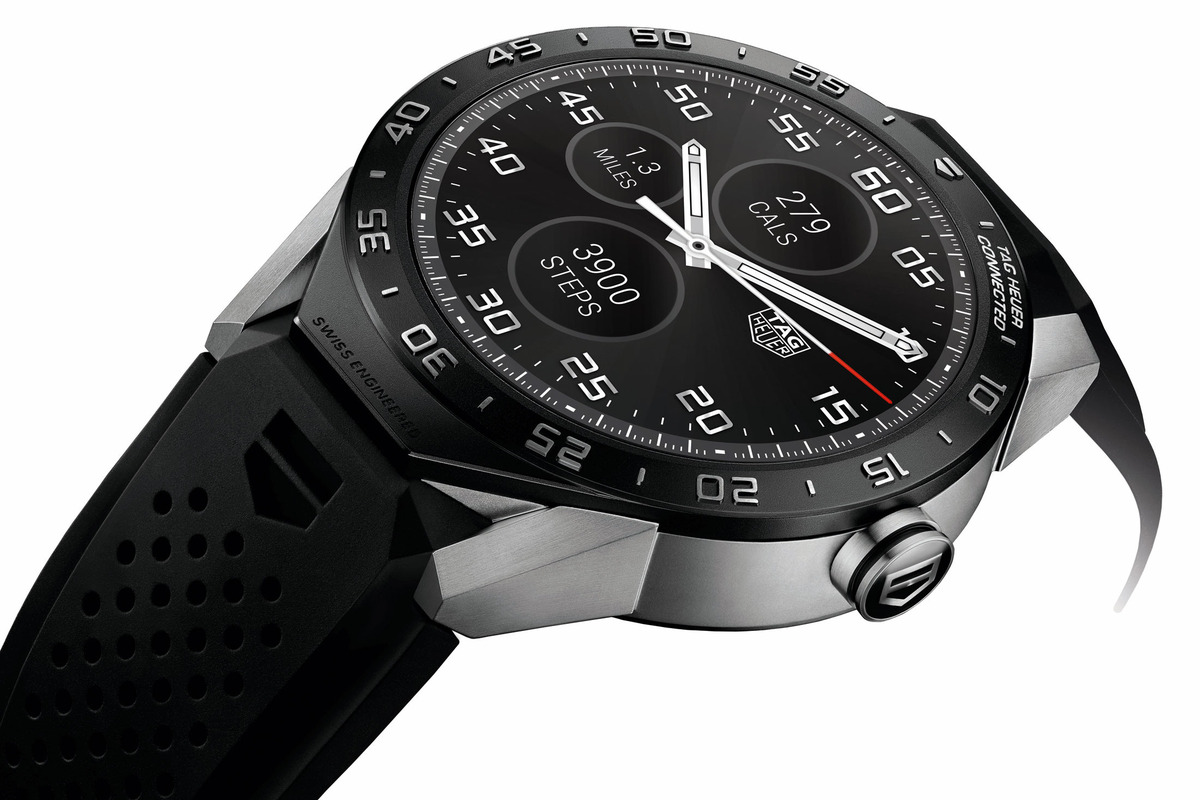 As for the sensors, you have your gyroscope and tilt detection in the form of an accelerometer but that’s about it, there’s no heart rate monitor or other dedicated sensors on this device. It also lacks GPS, cellular connectivity and a speaker, an odd decision since there’s built-in mic.

Build quality should be super because titanium is very strong and Tag Heuer is renowned for the durability of their watch cases. The Connected is 12.8mm thick and weighs in at 52 grams. Its sandblasted bezel has an anti-fingerprint coating and the watch is IP67-certified waterproof, making it splash-proof.

In addition to running Android Wear, the Connected uses Intel’s Atom Z34XX dual-core chip clocked at up to 1.6 GHz, with 500 megahertz “normal operation speed.” The Intel chip includes one gigabyte of RAM. A built-in 410 mAh battery should keep you going for 30 hours with normal use. The watch provides haptic feedback and packs in four gigabytes of flash storage.

On the connectivity front, the timepiece features energy-efficient Bluetooth 4.1 and 802.11 b/g/n/ Wi-Fi networking. The Connected displays the time with an accuracy of one-hundredth of a second. A range of watch faces with classic TAG Heuer dials are available through the software, with customizable complications.

The watch connects with both Android and iOS devices.

“The difference between the TAG Heuer watch and the Apple watch is very important,” said Biver in July 2014. “That one is called Apple and this one is called TAG Heuer.”

He was half-joking, of course, but there’s one crucial difference between Apple and Tag Heuer when it comes to obsolesce: After two years, Connected owners can pay another $1,500 to have their unit swapped for a mechanical TAG Heuer watch. Oh, and you get a full two year warranty coverage for your purchase.

According to Bloomberg, the case and buckle are designed and manufactured in Switzerland by the same team that makes the rest of TAG’s watches, but it’s unclear if the device bears the ‘Swiss Made’ label reserved for watches with at least 50 percent of components made within Switzerland.

More information is available on the Tag Heuer website. A replay of the company’s press conference in New York City can be watched on YouTube.

The Carrera Connected is available starting today in the United States in limited quantities before its November 12 debut in Japan. The Connected will follow shortly in other countries, said the company.