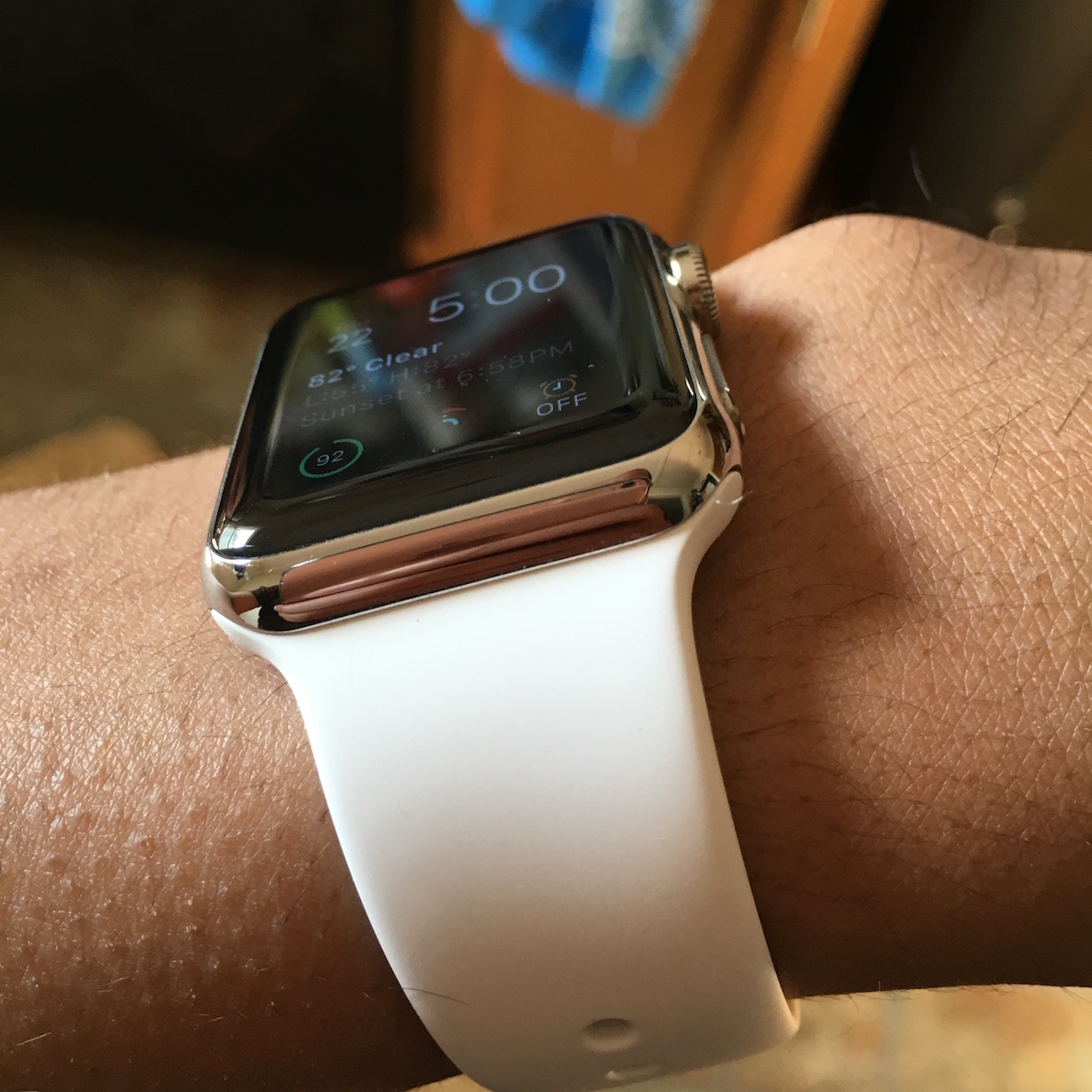 As many of you may know, I’m now on my second Apple Watch. I got in the game on launch day with a 42mm Space Grey Sport, and after a month or so with the device, I quickly realized that it just wasn’t for me.

Not only was the functionality not quite there with watchOS 1, it was heavily lacking in the looks department. You may not agree with me, but I think the aluminum Apple Watch Sport looks pretty bad with anything other than sweatpants or basketball shorts. Don’t feel bad if that’s what you have or prefer; remember, it’s just one person’s personal opinion.

If you’re the type that uses your Apple Watch primarily as a fitness device, then fine, I can certainly see the appeal of the Apple Watch Sport, hence its name.

For me personally, however, the Apple Watch is a fashion device first. It’s pretty good on the technical side of the fence in several areas as well, but coming to terms with this reality has made the experience of wearing this watch so much better in my eyes.

It’s a first-gen product with lots of promise

The Apple Watch is a first generation product, a 1.0 if you will. As such, it lacks polish and refinement. It’s still heads and shoulders above any other smart watch offering that I’ve tried to date, but that doesn’t necessarily make it great.

Even on watchOS 2, the Apple Watch is still really slow in many areas, and even native apps take much more time to load than I think they should. The Apple Watch is finicky, doesn’t always respond to taps, and sometimes just acts plain odd.

All of that said, it’s still really good at handling notifications, directions, decent as a Siri input device, and pretty great as a remote for controlling the Apple TV and Music. All in all, I’m satisfied with it from a technical perspective, especially since we’re only two iterations into the OS that powers it.

I’m admittedly not big on the fitness aspects

As someone who isn’t gung-ho on the fitness aspect of the Apple Watch, I realize that I’m doing the device a disservice regarding my impressions. Many people swear by the Apple Watch as a fitness device, and have the results to back it up.

For me, however, that’s just not a huge appeal, even though it probably should be. But the reality of the matter is that I’m not huge on using my Apple Watch as a fitness device. The potential is definitely there, but it just doesn’t fit my lifestyle at the moment.

Yes, I do an occasional run or jog on a weekly basis, but I don’t have time to walk for miles every day or go to the gym every day. Therefore, my Activity rings look very erratic at best. 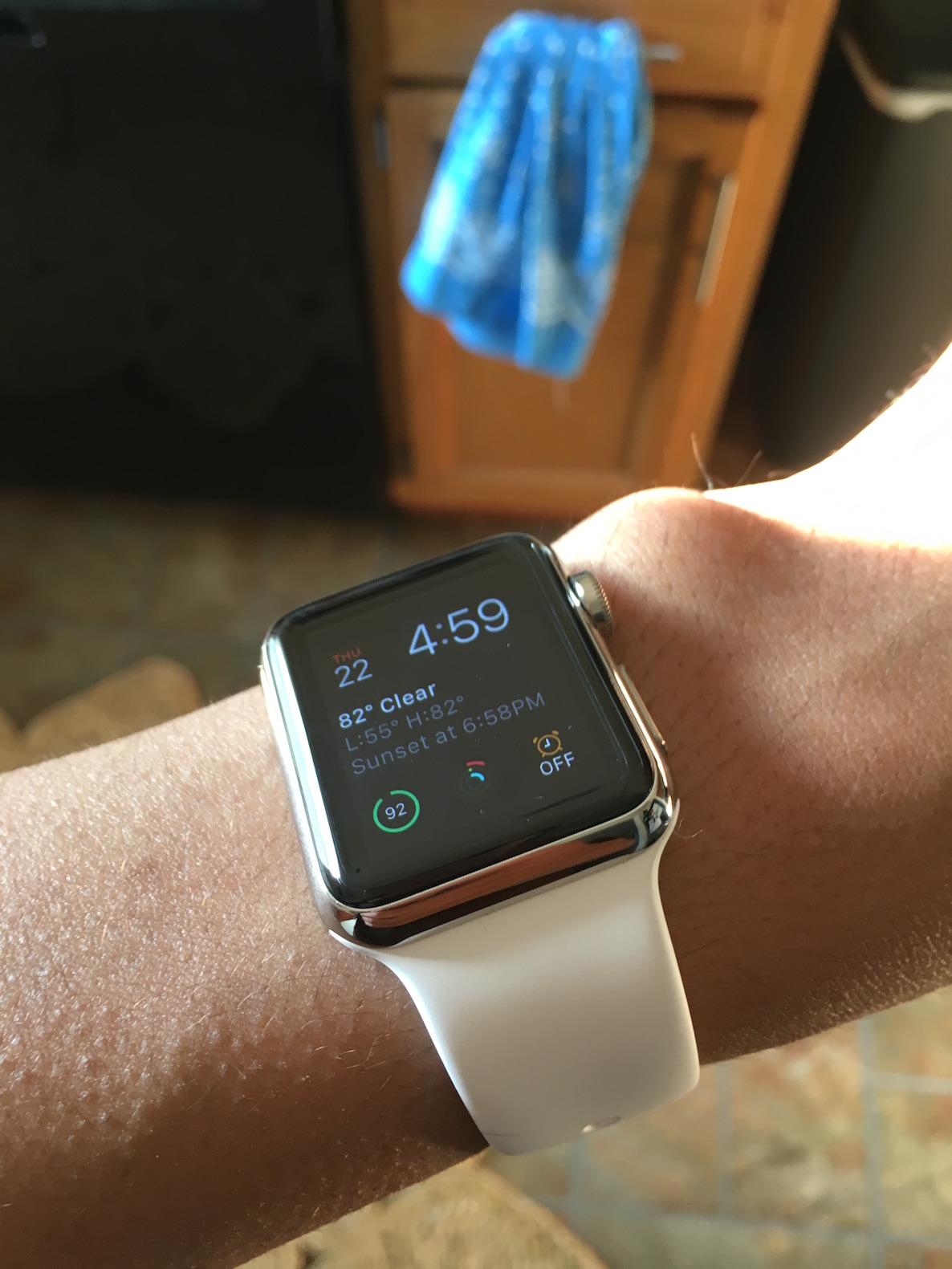 There’s a reason why the stainless steel Apple Watch is called the Apple Watch. It’s because it’s probably what Apple envisioned when it first set out to design the product.

I tried to justify purchasing an Apple Watch Sport due to it being a first generation product that I just wanted to “try” without investing in it too heavily. Here’s a little piece of advice, throw that mindset out, and pay the extra $150 to $200 and get the good-looking Apple Watch if you can swing it. You will be so much happier.

My stainless steel Apple Watch looks sooo much better, and goes well with the clothes I wear. I find myself admiring the watch and the stainless steel finish every day. This watch looks good—it looks fashionable—it looks like a piece of jewelry that I’m proud to wear. I can’t say the same for aluminum version.

Even when I get upset at how clunky watchOS is, it’s easy to forgive, because the hardware looks so good. Even if the technical aspects don’t always work as expected, no tech issue can change the fact that this thing is beautiful, and still goes well with my blazer and shoes.

If you’re a guy, don’t just automatically assume that you have to go for the larger 42mm Apple Watch. I have skinny wrists, and I’m not alone in that boat. My first Apple Watch Sport was a 42mm version, and I actually recommended the larger size across the board, which added insult to injury. For many of you, the 42mm watch will be like wearing a suit that’s two sizes too big. That doesn’t look good, it just looks plain silly.

The bottom line is that the 38mm looks infinitely better for my wrist. The 42mm looked like a gaudy toy, while the 38mm looked refined and well-fitted. At least try on the 38mm version if you’re in store. And then be honest with yourself.

If you take the mindset that the Apple Watch is a fashion device first, then it’s easy to overlook some of the device’s shortcomings. Regardless of how clunky watchOS may be at times, the Apple Watch still does way more than any other watch, mechanical, or otherwise, does on the market.

The fact that my Apple Watch is able to do all of these extra things, while looking good, is what matters. If you view it as a fashion device first, that will go a long way towards changing your mindset. It certainly did for me.