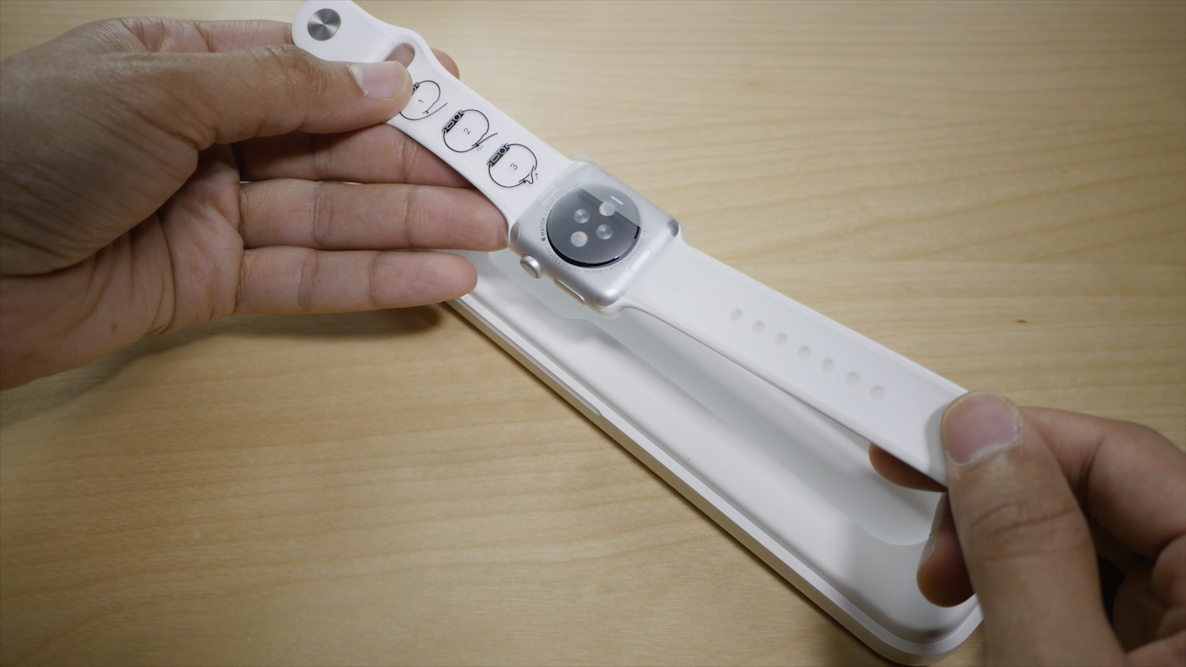 After what seemed like an immeasurable wait, I finally got my UPS delivery, and the Apple Watch is now in hand. Unfortunately, I only received one of the two watches that I purchased—a 38mm Apple Watch Sport with a white band. I’m not complaining though, at least I got something on launch day.

Watch our unboxing video for a full look at what’s inside. I’ve also included an overview of the Apple Watch hardware mated with my giddy commentary.

As other have stated, the Sport band is much nicer than one may first assume, fluoroelastomer or not. It has a supple feeling that’s soft to the touch and feels great on the wrists. The black version of the Sport band is even better feeling.

Speaking of the band, it’s broken up into three parts for adjustable fitting. It also comes with an inductive charger (it’s plastic, unlike the metal versions featured with the Watch and Edition collections) and a tiny power brick.

The 38mm version of the Apple Watch is extremely small. I’m glad that this one won’t be my daily driver, as my 42mm Space Black Apple Watch Sport will assume that duty upon arrival.

Although three collections exist for the Apple Watch—the Sport, Watch, and Edition—it’s good to know that from a hardware perspective, all models of Apple Watch are pretty much the same. All of them sport the exact same technical hardware inside of the device.

This is, perhaps, the most iconic hardware feature on the Apple Watch. The digital crown is found in the upper right-hand corner of the watch. It features circular movement and it can be clicked. The digital crown has several functions:

This button sits beneath the Digital Crown and is clickable. It’s used for the following functions:

One of the cool things about the Apple Watch is its display, not only is the display an AMOLED screen, with great black levels, it’s also a button. The Apple Watch includes a feature called Force Touch, that allows you to firmly press on the screen to do things like changing the watch face or to see in-app options.

The display features the following gestures:

Unlike the iPhone and iPad, the Apple Watch is not multitouch enabled. Considering how small the screen is, that makes sense.

The rear of the Apple Watch

You also have a heart rate sensor—those four little circles that rest against your wrist. These circles light up with a green color in order to calculate your heart rate.

The other circle that encompasses the four smaller heart rate sensor circle is the ring that the inductive charger pad aligns to. You simple rest your Apple Watch against this charger, and the charging begins. There is nothing to plug in on the Apple Watch itself.

There is one more interface available on the Apple Watch that I’ve yet to mention, and that’s the diagnostic port. This port is located beneath the area where the swappable band locks into place.

The diagnostic port features six pins that allow a proprietary peripheral cable to connect to it. As of now, this port is only used by the geniuses at the Apple Store, and ships with a cover for protection against dirt, water, and debris. Whether or not that port will ever be used by the mainstream public remains to be seen. It’s possible that approved third-party bands could tap into this port for additional functionality.

As time goes on, we will no doubt learn other interesting facts about the Apple Watch hardware, but this is a good starting point if you’re brand new to the device.

What’s your favorite hardware feature of the Apple Watch? What feature surprised you? Has any feature disappointed you?