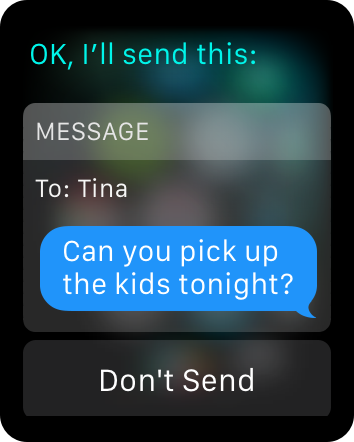 A new feature of watchOS 2 finally allows users to send messages completely hands free, and even though there is a catch, it’s a much welcome improvement to communicate via text message without having to physically touch the device.

The catch is that this new feature only applies to messages you create from the Home or Watchface screen using Siri. It does not work for replies to messages you receive, and doesn’t work if you go straight to the Messages app and tap Reply. Still, if used right, it can make the process of sending messages completely frictionless.

How did it work before?

Up until watchOS 2, if you wanted to send a message, you had to dictate it, then you had to tap Send to confirm. By design, there was no way to send a message without having to physically touch the screen at some point. Even though our own Jeff Benjamin had uncovered a workaround to make it work hands free, it just wasn’t convenient, or elegant for that matter.

How do you send a message hands free now?

Step 2: Dictate your message as you normally would. For example: “Hey Siri, tell Tina can you pick up the kids tonight question mark.”

Step 3: Done. Nothing else to do. Just lower your wrist and go on with your day. Your message will automatically be sent in 15 seconds. But if for some reason, you don’t want to send it, simply tap Don’t Send.

So what Apple has done is that it reversed the process where before, you’d have to confirm you did want to send the message. Now you have to take action only if you don’t want to send it.

As mentioned above, this only works for messages you create from scratch. It doesn’t work for messages for which you hit the Reply button. So if you receive a text message and hit Reply, this won’t work. Likewise, if you go into the Messages app on your Apple Watch and hit Reply to a conversation, it won’t work either.

However, it’s easy to figure out how to get around this limitation. If you want to reply to a message, don’t hit Reply, and simply say “Hey Siri, tell Sebastien: yes I can pick up the kids tonight.” If technically you are replying to the message, you’re actually tricking Siri into creating a new one based on an existing conversation.

This is to me one of the best features of watchOS 2, and I do wish Apple made more effort to streamline messages even further. For example, I would like to be able to reply to messages without having to touch my watch. Easier said than done, of course.

So tell me, are you as excited as I am about sending messages hands free from your Apple Watch?