Complications in the watch making industry are added features to the movement of a watch beyond simply telling the hour and minutes. The Apple Watch, of course, features a selection of software-based Complications allowing you to put stuff like Activity rings, the weather, stocks, the latest sports scores and more right on your watch face.

Night Sky offers a brand new Complication designed to display the next ISS flyover time directly on your watch face. You apply it to a watch face as you normally would.

Firstly, press firmly on your watch face to enter the watch face selection interface. Now choose a watch face that supports Complications (may I recommend Utility, my absolute favorite?) and continue by tapping on Customize.

Now tap on a Complication slot on your chosen watch face and turn the Digital Crown to cycle through the available Complications, which in watchOS 2 include both Apple’s stock Complications and third-party ones..

Select Night Sky’s ISS Complication and press the Digital Crown when done. Now I can easily see, just by glancing at my wrist, that the International Space Station will be flying over my current location today at 3:43am. Sweet! By the way, the colored Activity rings on the watch face is another nice-to-have of watchOS 2. 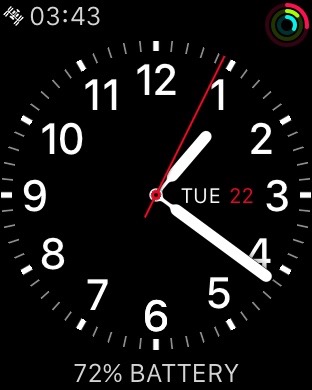 While third-party Complications are currently few and far between, many developers are hard at work adding them to their apps. To check if your favorite app supports Complications on the Apple Watch, contact their developers or simply read release notes in the App Store when an update is available.

On the Apple Watch, Night Sky is now a fully native app.

Being native makes the app noticeably smoother to navigate and faster to respond to your commands, which shouldn’t be surprising as watchOS 2 runs native apps directly on the Apple Watch hardware.

Speaking of which, the watchOS 2 software development kit allows developers to directly access hardware features like the built-in microphone and speaker, Digital Crown, Taptic Engine and accelerometer and heart rate sensors, allowing even greater independence of the Apple Watch from its connected iPhone.

Night Sky takes advantage of the Digital Crown to make it easy and fun to explore the sky above you. Just tap on the Sky View option in the main menu and up pops a nicely rendered view of celestial objects, as observed from your current location.

Turning the Digital crown moves the selection rectangle from one celestial object to another. Pressing the name label brings up an overview of the selected object in the form of a small thumbnail and a short textual description.

Other features of Night Sky’s native Apple Watch app include a lightly animated overview of your sky tonight, a stargazing clock functionality, a map of nearby stargazers like yourself and latest news from developers. 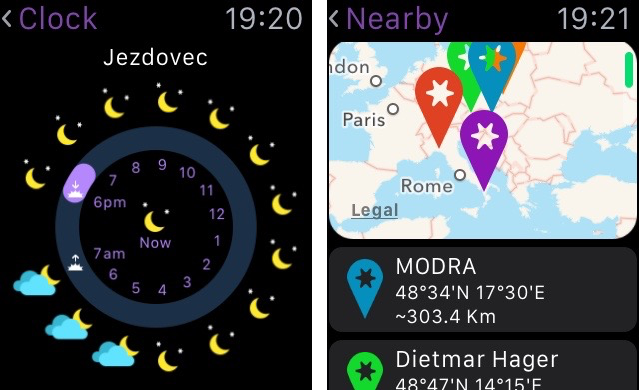 Although far from perfect, support for the Digital Crown in Night Sky lets you appreciate celestial objects from your wrist more easily than before. This level of interactivity and smoothness would have been impractical, if not downright impossible, in the previous version of the Apple Watch operating system.

In addition to the new ISS Complication for your Apple Watch, the most recent Night Sky update has enabled 3D Touch for the iPhone 6s and iPhone 6s Plus, full multitasking support on iPads, the ability to search for celestial objects directly from the Spotlight Search interface and more.

And thanks to App Thinning, Night Sky now takes up less space on your device.