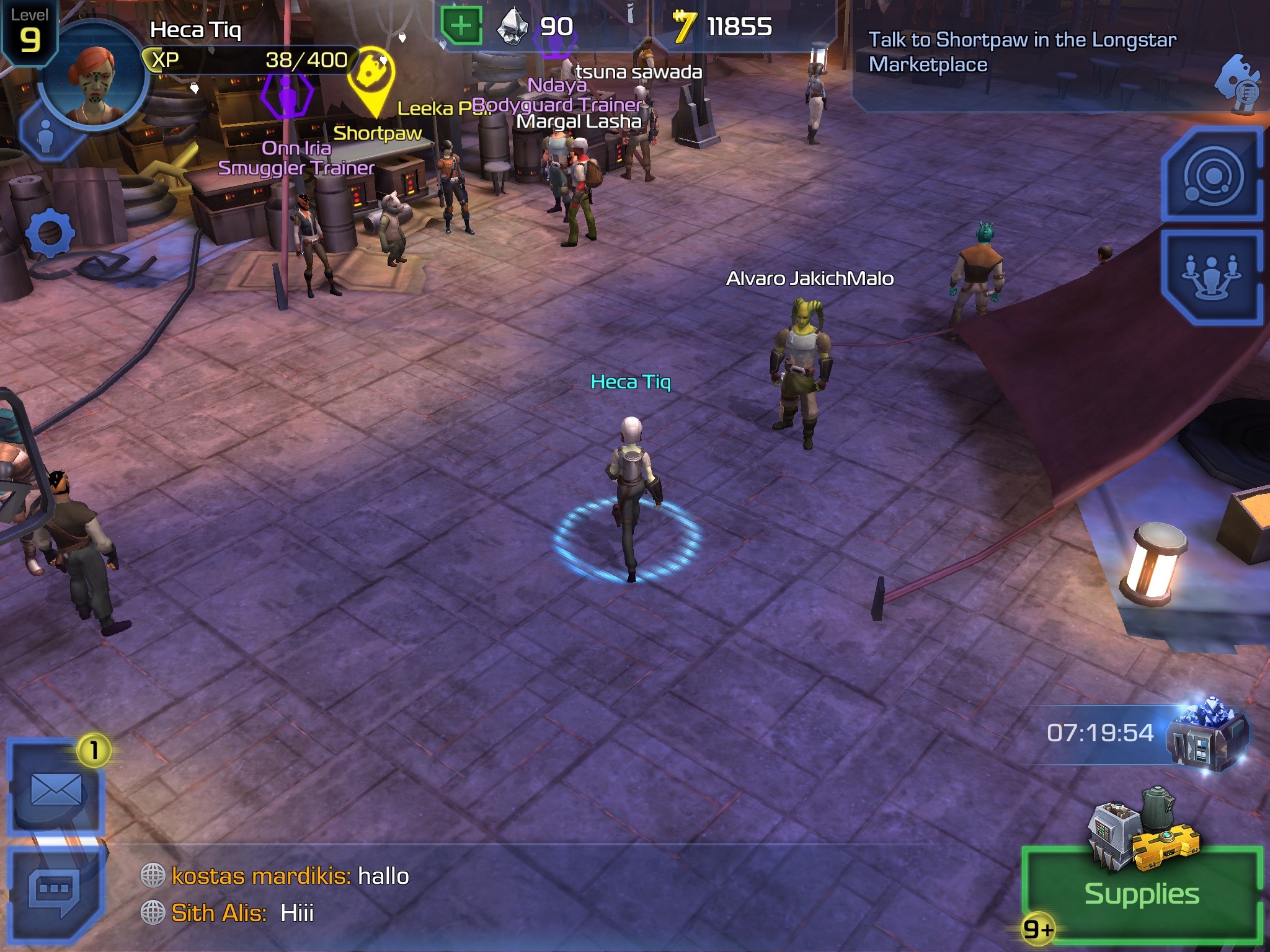 As a self-proclaimed Star Wars fan, I am both excited and have trepidations about the upcoming seventh installment. That does not, however, stop me from getting overly excited about the hype leading up to The Force Awakens, and that includes video games.

Star Wars: Uprising is being billed as the game that bridges the storyline between Return of the Jedi and TFA. While it may fill in the story gaps, is it a game worth investing your time in? We’ve got a full game review of Star Wars: Uprising for you today.

A long time ago… The game focuses on a smuggler trying to survive in the hostile sector of the universe. As you go on missions and travel to new planets, more information comes to light about what is going on in the Empire. Players travel to different planets, completing missions and making new friends along the way, friends that might have knowledge of the Empire’s next move.

Similar to many role-playing adventure games, players earn experience points and upgrade their character in order to progress. There is a number of immersive elements, like collecting an entire gear set, gaining reputation with local groups, and joining other cartels for in-game support.

The game focuses on an above-shot view of the landscape, although you can zoom in for a eye-level view of the action. There are currently three sectors in the game – Burnin Konn, Mataou, and Hoth. Each planet has a different environment with different enemies to fight. For example, on Mataou, players must watch out for the native Ro Hypa.

Star Wars themed music plays constantly in the background, reminding you of the action you are in the middle of.

When you are not out on a mission, you will likely be in a cantina or market square. In this area, players can level up weapons and armor, send crew on missions, train their abilities, and talk to other players in the general chat window. 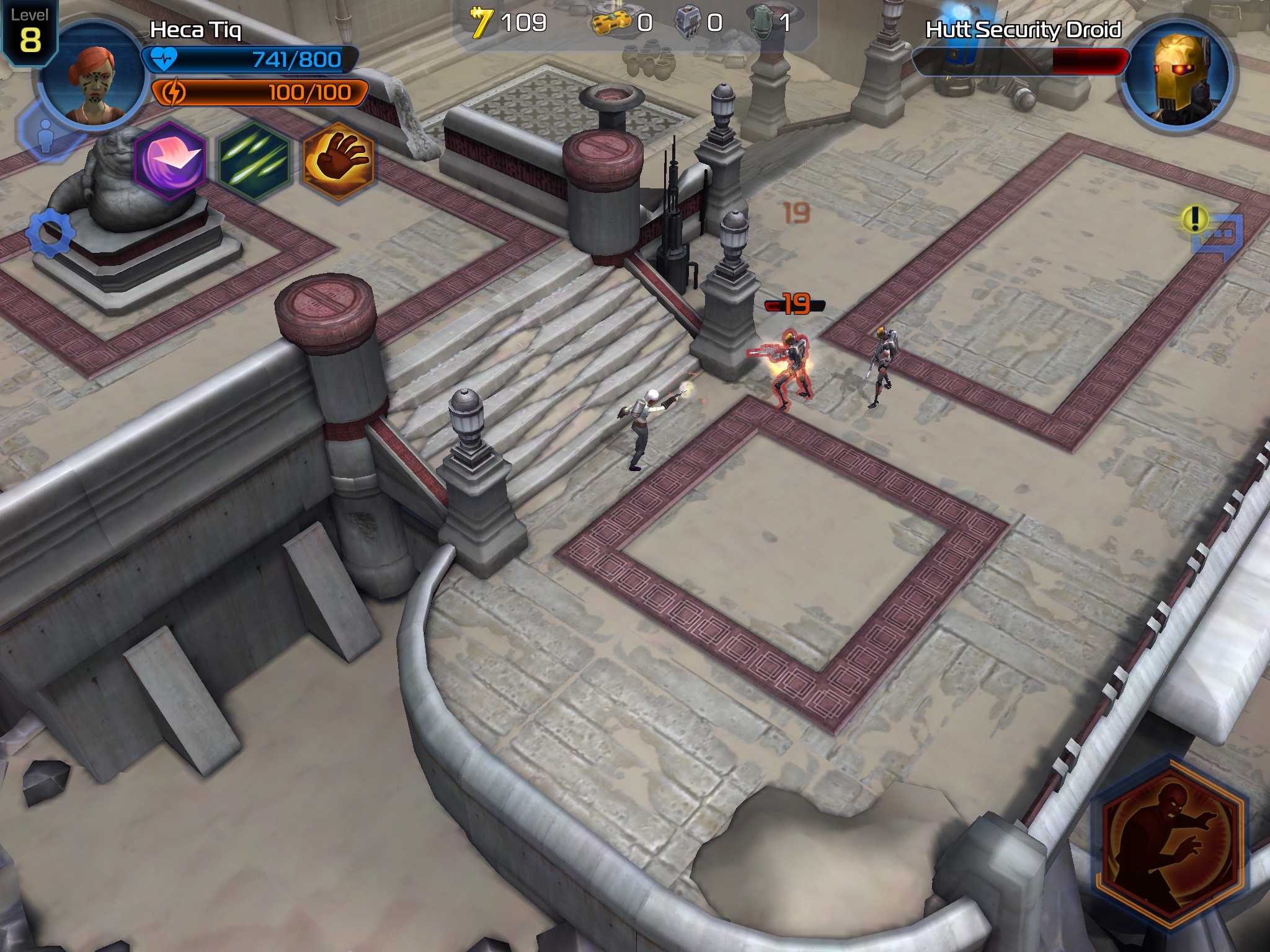 It’s hard to start talking about the gameplay because there are so many facets to the game. The main point is to go on missions to earn credits and experience. However, there is a number of smaller features that keep you busy along the way.

When not actively battling in a mission, players work on leveling and upgrading their weapons and gear. Each item can be improved with special crystals and some credits. After an item reaches its max level, you can upgrade it with rare crystals and even more credits.

Players also train their abilities. Visit a trainer in the market to learn bodyguard or smuggler skills. With enough credits and faction medals, you can train multiple abilities.

You can’t, however, use them all. Your character can use one ability in each category at a time. You can switch them out for different missions, depending on what you think you will need.

Once you’ve discovered new crew members in missions, you can send them out on Crew Runs where they earn more experience while collecting goods and credits for you.

After you’ve started earning a reputation with the factions, you will be able to go out on daily missions, which generally provide a lot of credits, as well as a few useful items.

You can also join a cartel, which puts you into a group of players vying for top position in the leaderboards.

As for missions themselves, there are main campaign quests, where you fight waves of bad guys while hunting down parts or some other thing needed by the person that sent you. There are also side missions, which reward you with additional credits and swag. There are also Assult Missions, which reward you with Battle Readiness. When the star system has filled its Battle Readiness meter, players can join in a Sector Battle. In Sector Battles, players go on missions and battle runs to earn Victory Points and Battle Plans.

As mentioned above, there is also a general chat window that stays open while you are in a cantina or market square. You can tap the chat icon to enter full-screen mode and tap a player’s name to direct chat with him or her. You can also tap on a player that is walking around in the square to chat directly.

As you can see, there is a lot going on in this game. I’ve played for a few hours now and have reached level 12. However, the story of the Uprising hasn’t really made its way into the gameplay yet. I’m still waiting to learn what has happened to Palpatine’s minions. 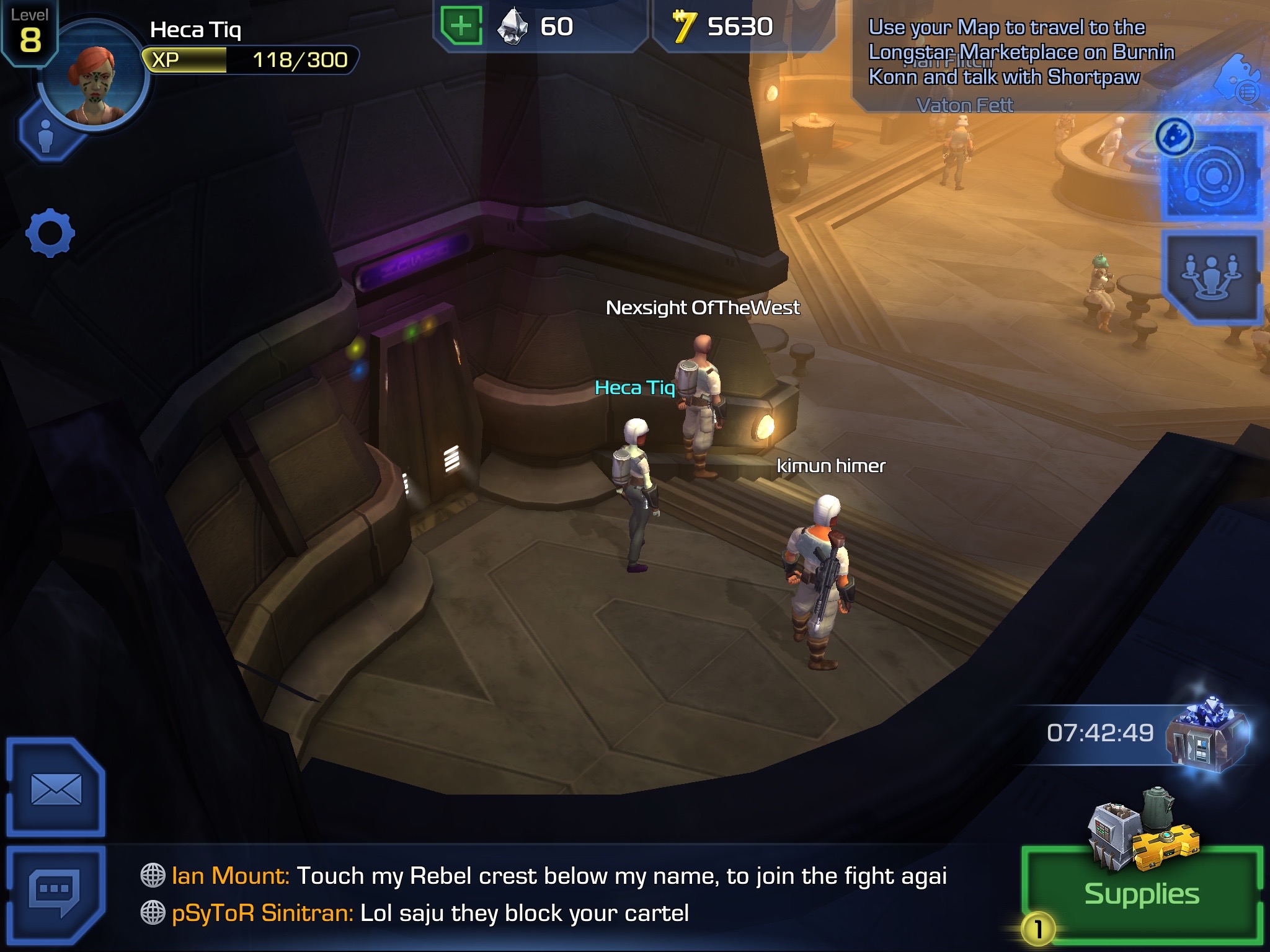 This game immerses you in the world of Star Wars. It is one part Knights of the Old Republic and one part Diablo. There are lots of things to pay attention to. You aren’t just grinding mission after mission in a repetitive mechanic.

Even though this is free to download, which means there will be stuff to buy, it doesn’t rely on requiring you to pay for stuff. You earn a lot of credits and gear just by playing. Real money tends to be spent on special items, like a bowcaster or a rare crewmember. There are lots of ways to spend money, but no time when you feel like it is necessary to get through the game.

The game felt a little too busy to me. There are missions that are only available for a certain amount of time. Every time you discover a new item, you have to acknowledge it in your inventory section, where you are rewarded something for it. It seems a bit unfocused, making it difficult to get absorbed into the storyline.

Star Wars: Uprising is free to download. While there are many ways to pay real money for stuff, there doesn’t seem to be a need for it. Purchased items are mainly rare things that aren’t required for gameplay. The replay value is very high, especially since there are new missions every day. If you miss a day, you might miss an important opportunity to earn credits or reputation.

As a Star Wars fan, I can easily say this game is worth your time. It is easy to get sucked into (so much so that I ran my battery down twice) and provides a new story for the expanded universe. It feels a bit busy, but is nice to have an overabundance of stuff to do. This game is available on the iPad, iPhone and iPod touch. Download it in the App Store today.