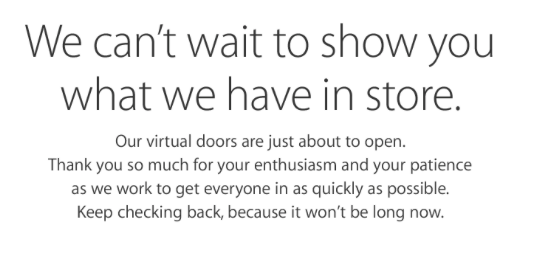 Apple has just taken its online store down, ahead of its pre-order launch for the iPhone 6s and 6s Plus. Beginning at 12:01 am Pacific Time, or 3:01 am Eastern Time tomorrow, customers will be able to place pre-orders for both of the handsets.

Apple unveiled its new smartphones at a major media event on Wednesday. Although they look similar to their predecessors, they offer several new features including faster processors, better iSight and FaceTime cameras, and of course 3D Touch.

Folks looking to pre-order a phone on-contract will want to contact their carrier of choice to confirm eligibility (it looks like Apple’s eligibility tool went down with its store). Those looking to buy an unlocked phone may want to read our tutorial here.

For those looking for a better deal, or perhaps to change things up, there are a few new options this year. T-Mobile has announced a new $20/month iPhone 6s promotion, and Apple has its own Upgrade Program in the US now, which starts at $32/month.

Do you plan on pre-ordering a new iPhone 6s? What model/color are you looking at?