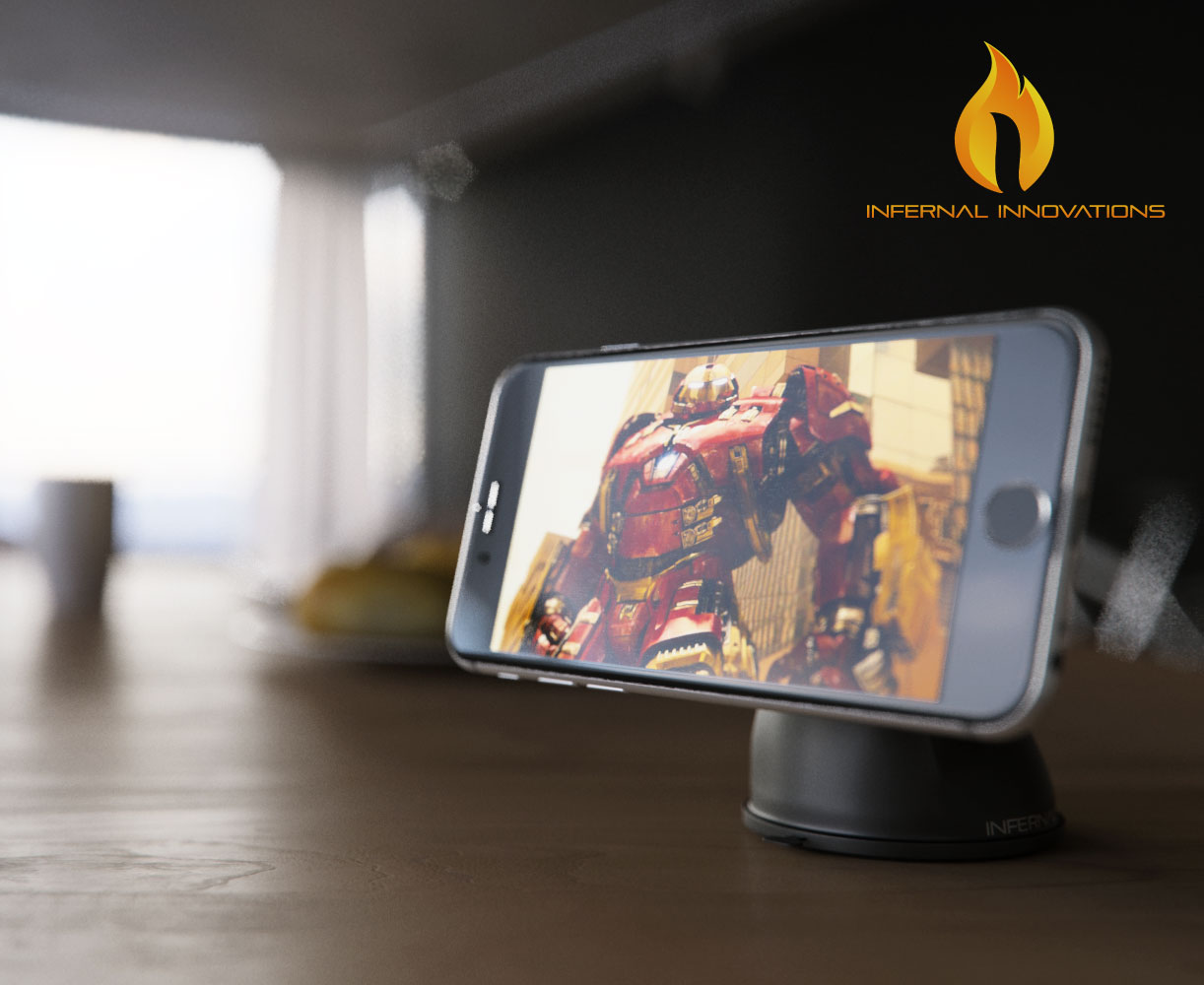 One of the many first-world problems people face everyday is having a convenient place to stow their smartphone whilst driving. Leaving it in one’s pocket seems to be the default move, but if talking while driving is legal in your area, pulling a phone from your pocket is arguably more dangerous than the phone call itself. Even for simple tasks like skipping a song, or following driving directions, there has to be a better solution.

And there is. I’ve spent some time looking at different car mounts for phones, and there is quite a variety of models for sale. Many use a suction cup to cling to the vehicle’s windshield, while others stick into the air vents or cup holders. Generally, though, they’re rather clunky, with clips of some sort to grasp the phone, which naturally need to be resized or bought specifically to fit each person’s phone size. To make matters worse, there are always catch and release mechanisms that have to be dealt with when mounting or removing one’s phone, and this step takes place at least twice per drive.

Then I noticed the Magnetic Phone Mount from Infernal Innovations, a car mount that secures phones magnetically. Instead of grappling with clamps and arms, simply reaching for the mount is enough to suspend an iPhone in mid air for the duration of a drive. Taking it off is just as simple, and the entire process requires little thought and minimal effort.

The concept behind this relatively simple, as is its usage. The user places a thin metal disk (it comes with two, one being round and the other being rectangular) between the back of their phone and its case, which magnetically holds the phone to the mount. The downside to this is that it will not work for iPhone users without a case, and the disk may cause a slight protrusion in hard cases – my round disk allows me to spin my phone in a circle on a flat surface – but that hasn’t been too big of a deal for me. Phones with a removable back can alternatively work by carrying the disk between the battery and back cover. 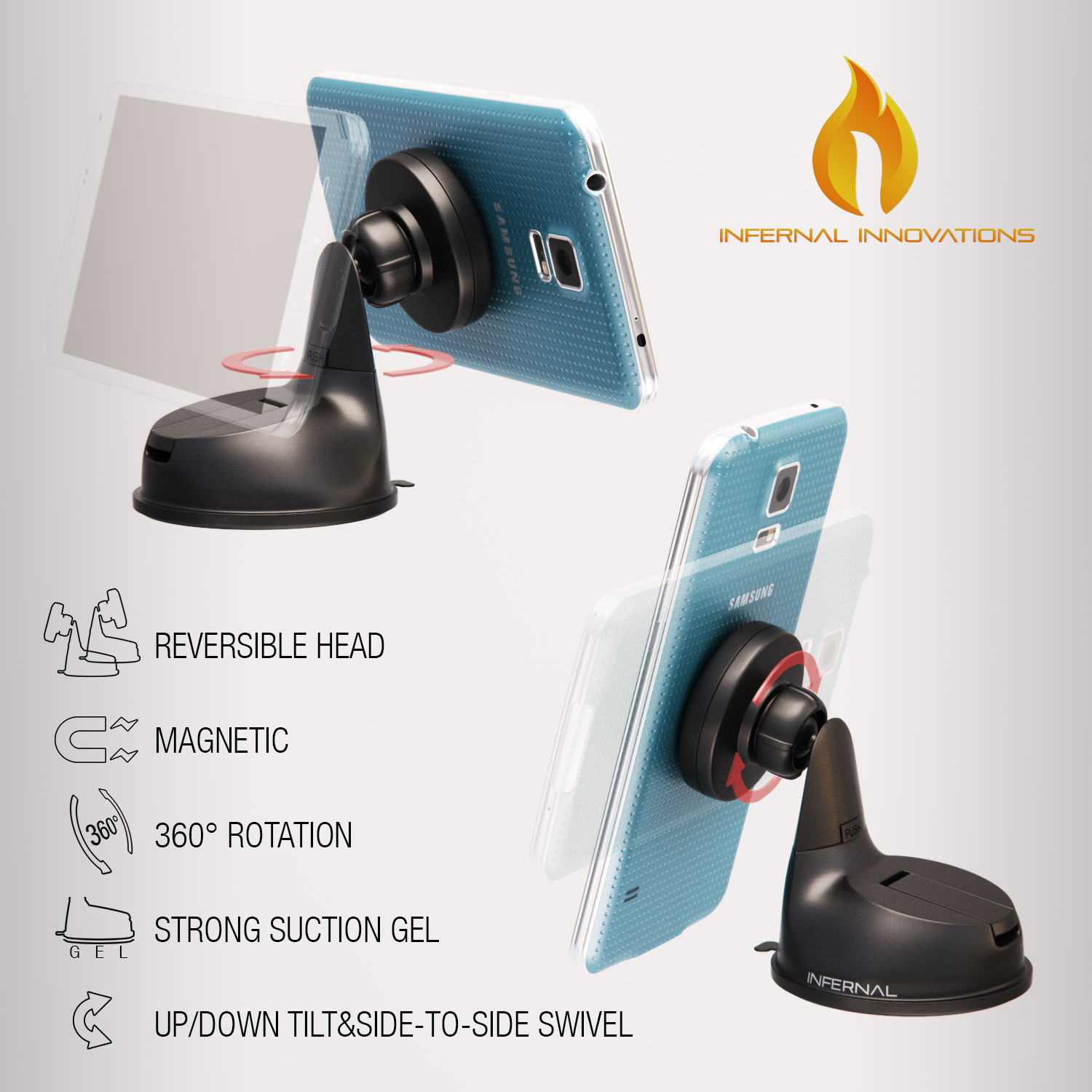 The upsides are many, not only limited to the ease with which a phone can be attached and removed, but turning it to landscape mode is considerably more seamless than on many other mounts, simply requiring an effortless turn of the device. One thing I should mention here is that having multiple cords plugged into a phone while it’s attached to the mount in landscape mode can sometimes pull one side of the device down a bit. For example, charging and using an auxiliary cord to listen to music simultaneously may not work well in landscape mode, although I’ve had no trouble doing so in portrait. This is a minor quibble, however, as most users with newer vehicles will be using Bluetooth for audio streaming and won’t have a reason to plug in multiple cords at once.

I’ve been testing Infernal Innovations’ mount for a few months now and have never had any trouble with my iPhone 5s falling off. A friend of mine briefly tried his Samsung Galaxy Note 4 on the mount and it held just fine as well, despite being a much larger, 5.7-inch device. Although I haven’t specifically tried it, the iPhone 6 Plus should work well with this mount, in theory.

The body of the mount itself is surprisingly small and lacks the large profile of clamp mounts, only having a larger footprint when a phone is attached, and that is solely because of the phone. The magnetic head of the device can be titled in all directions that a ball socket would allow, and it packs enough resistance to hold its position while still being easily manipulable.

As is often the case with car mounts, this Magnetic Phone Mount uses a suction mechanism to attach itself to the windshield of a vehicle. In this case, the force of the suction is extremely strong, keeping the mount firmly attached to a smooth surface. This appears to be partially due to the stickiness of the suction gel, which left a noticeable but removable ring of adhesive on my windshield. It was, however, surprisingly easy to clean and came off within one or two wipes with rubbing alcohol and a paper towel. My mount has fallen off once or twice, although I wasn’t in the car either time it happened. To my knowledge, however, this only occurred because the mount was hit with the sun visor, perhaps multiple times, but the mount holds a strong grip that is doubtful to loosen under normal conditions. 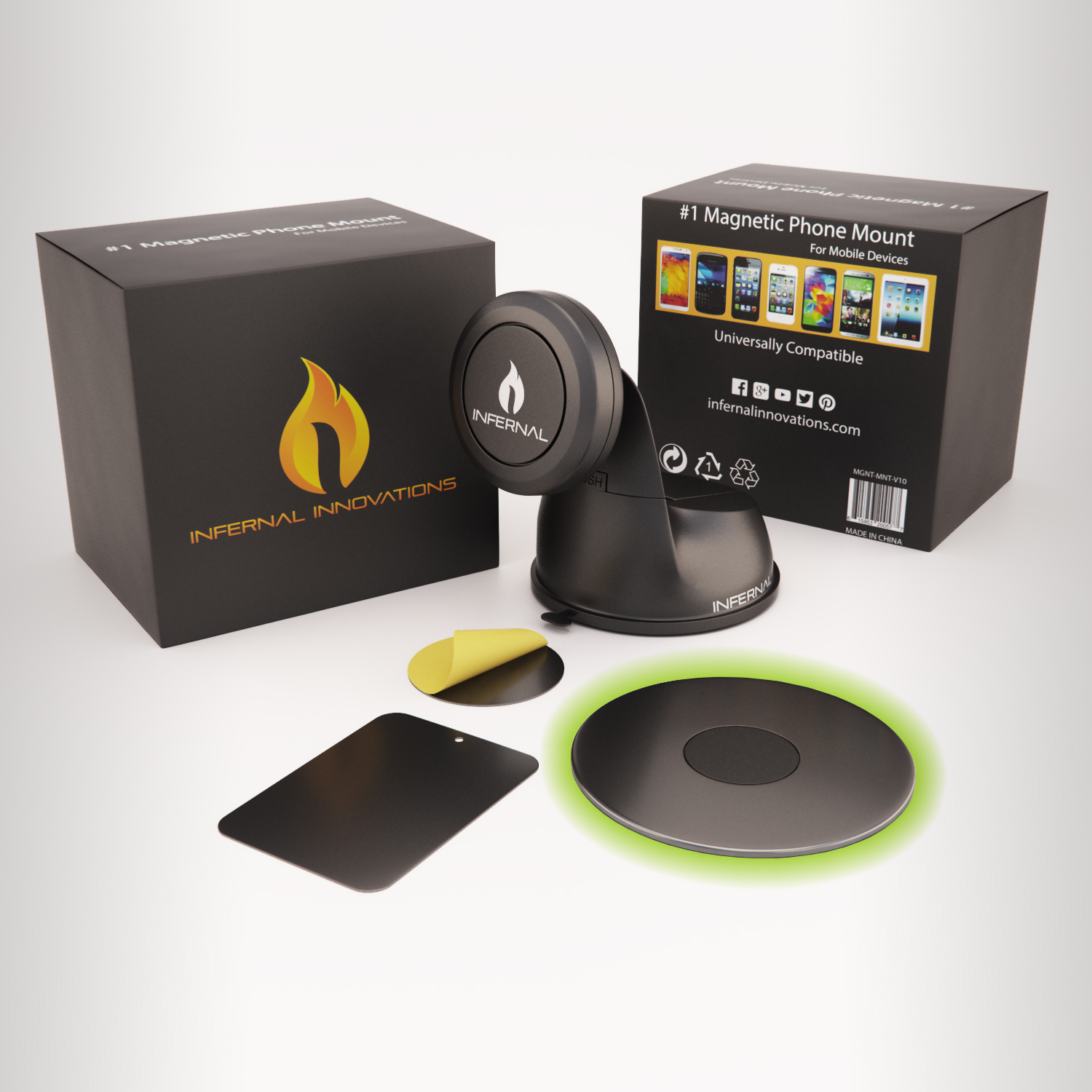 For those who would rather mount the unit to their dashboard, it comes with a sticky disk designed specifically for merging the suction to a surface that may not be as smooth as the glass of a windshield.

All things considered, this mount is an excellent option for users who are looking for a solution less clunky than the clamp-based phone mounts. Users who prefer a naked phone will have to look elsewhere, however, unless their device has a removable back cover. Cases with slight flexibility on the back work best with the mount, as they’ll allow users to soon forget the disk inside that provides the magnetic attraction to the mount.

Available for $20 on Amazon, this mount will be worth the price to many, and I’ve certainly enjoyed using it and showing it off to anyone who happens to ride with me. There’s a certain “coolness factor” that comes with the product that fits nicely with the high level of convenience it provides. You can pick up this Magnetic Phone Mount for $19.99 from Infernal Innovations on Amazon.

Update: I have since upgraded to an iPhone 6s Plus and can confirm that this mount still works very well, even with the increased weight of the device.