Portal, an Android app that launched earlier this summer, is now available on your iPhone free of charge in the App Store.

Created by a company called Pushbullet which makes a namesake cross-platform notification mirroring utility, Portal for iPhone uses QR codes and takes advantage of peer-to-peer connectivity to transfer very large files and folders between your devices in a snap.

With Portal, you can transfer files from your computer to an iOS device via a simple interface that can be accessed through any web browser. The app lets you transfer as many files as you’d like and imposes no file size limits.

Here’s a quick review of Portal based on my brief hands-on time with the app.

Step 1: First, access the Portal web interface at portal.pushbullet.com in Safari, Chrome or other browser on your Mac and scan the code shown on the webpage using Portal for iPhone, iPod touch and iPad. 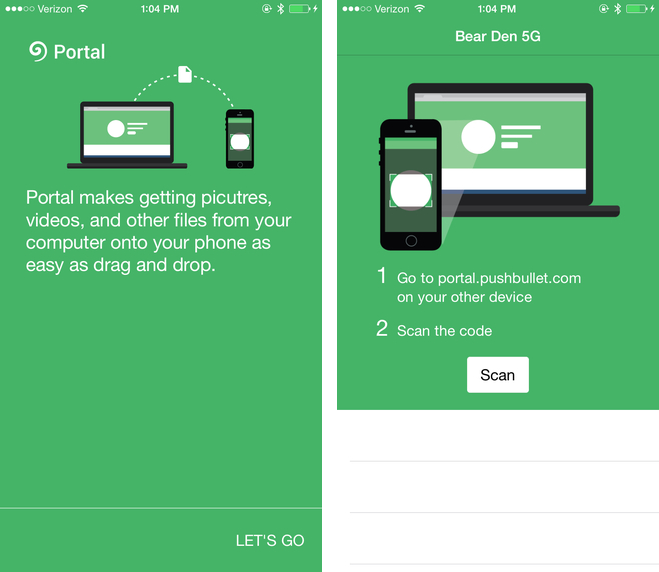 Step 2: On your computer, select some photos, videos, documents and other files you’d like to transfer over to your iOS device. Just drag and drop files on the browser window to start the file transfer. If you use Google’s Chrome browser, you can even drop entire folders on the Portal window.

Tip: Make sure your iOS device and computer are on the same Wi-Fi network.

Because files are transferred over your Wi-Fi connection, they don’t count toward your mobile data limit and are transferred very quickly. Portal can transfer any number of individual files or entire folders at once.

Files are organized within Portal in the same way as you transferred them, including entire folders, and are browseable just like on a computer. Needless to say, the files are trapped within Portal unless you export them elsewhere. 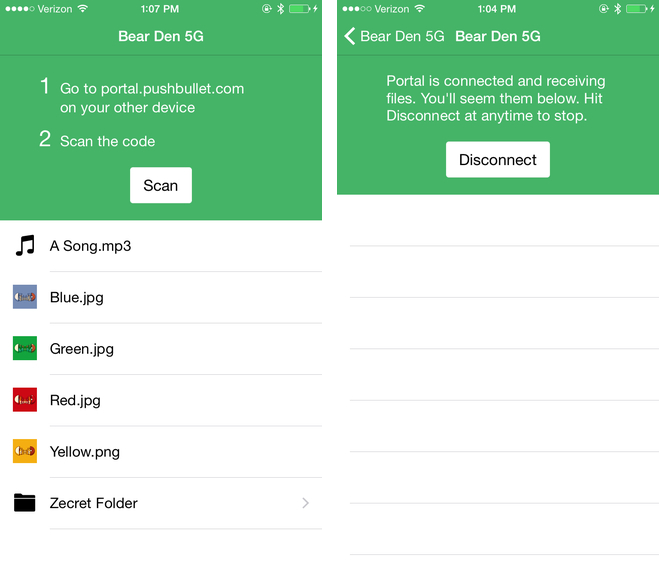 This does not concern me.

I particularly like that Portal can be used to get files from someone else.

Simply have a friend open portal.pushbullet.com on his or her computer, tell them to scan the QR code using Portal on their iOS device and add some files through the web interface.

Again, both devices must be on the same Wi-Fi network so you cannot use Portal to share files with a friend who lives in another building, city, state or country.

Here’s Portal in action. Although the video shows an Android device, Portal works the same on iOS..

Why you should use Portal

Some of the more compelling reasons for using Portal include:

And as mentioned before, Portal supports iOS’s “Open In…” feature, has useful Share extensions and allows you to access its files from others apps like Pages with custom file pickers.

Future updates will bring some of the features missing from the initial release, including the ability to transfer files from your mobile device to a computer.

So what’s the difference between Portal and Pushbullet’s namesake app? Though both can transfer files from a computer to your phone Portal, unlike Pusbullet, was designed to handle very large file transfers in a snap.

Also worth mentioning, Pushbullet doesn’t need your devices to be on the same Wi-Fi network like Portal does, meaning it doesn’t handle very large files or many files as well as Portal can.

Portal is available on the iPhone, iPod touch and iPad.

The 6.7-megabyte download requires iOS 8.1 or later and supports native display resolution of the iPhone 5/5s/5c, iPhone 6 and iPhone 6 Plus.

Grab Portal free of charge in the App Store.