In addition to running newly-released Windows 10 natively on your Mac in dual-boot mode through Boot Camp 6, you can now enjoy Microsoft’s latest and greatest operating system alongside OS X using the popular virtualization solution, Parallels Desktop.

Parallels Desktop 11 is noticeably speedier in common tasks, like booting and shutting down which can be as much as 50 percent faster for Windows 8.1 and Windows 10.

Running Windows through Parallels Desktop 11 also yields a 25 percent longer battery life on Mac notebooks via a feature called Travel Mode which disables select resources that drain power while you’re on the go. 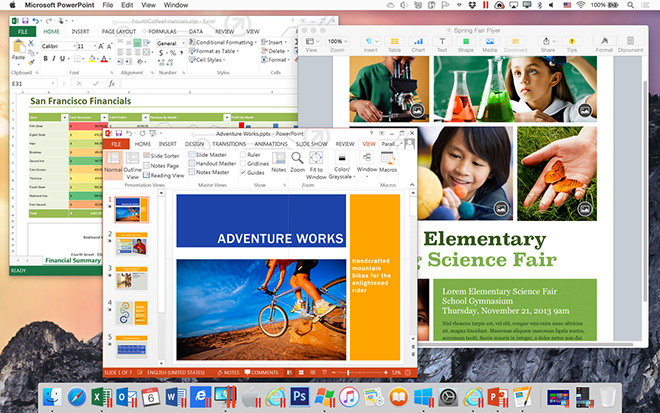 “Seamless experience has been the hallmark of Parallels Desktop since its inception. Today we further our commitment to innovation with Parallels Desktop 11—from Windows 10 and El Capitan integration to making Microsoft’s Cortana available on Mac,” said Jack Zubarev, Parallels president.

“We’ve made it easier than ever for our customers to run Windows on a Mac.”

In addition to accessing Microsoft’s impressive personal digital assistant in both Windows and OS X, this release of Parallels Desktop also brings out experimental support for OS X El Capitan prior to its launch.

The virtualization software will fully support El Capitan shortly after its release in the fall.

Next, no longer do you need to use OS X’s “Open With” feature to open files created by Windows applications as Parallels just does the right thing.

Here’s a full list of changes and additions in Parallels Desktop 11.

All of the features of Parallels Desktop 11 for Mac, as well as the following new and key features:

All of the features of the Parallels Desktop 11 for Mac Pro Edition, as well as the following key additions:

Pricing and availability information follows below.

In order to run Windows on your Mac, you must have a copy of Windows 7, 8 or 8.1 to upgrade to Windows 10 at no cost, or an authentic copy of Windows 10 which is available for $119 from the Microsoft Store as an ISO file download or a USB stick.

Consult the official feature matrix to determine which edition is best suited for your needs. If you already use Parallels Desktop 9 or 10, you can upgrade to the new Parallels Desktop 11 today for $49.99 through the company’s website.