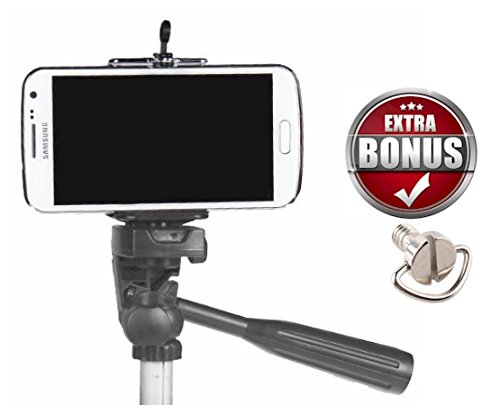 Photography hobbyist and professionals alike have their favorite tripod for taking steady shots. Even the most amateur iPhone photographer might enjoy a selfie stick every once in a while. Why limit yourself to just one tripod?

DaVoice makes a basic smartphone tripod adapter mount that stretches wide enough to be used with such devices as the iPhone 6 Plus, and is universally adaptable to both mini stands and standard tripods.

The clamp that holds the smartphone stretches enough to fit devices as wide as 3.37 inches. Apple’s largest smartphone, the iPhone 6 Plus, only measures 3.06 inches in width, so there is even room for a bulky rugged case.

The clamp is spring loaded and covered with soft rubberized padding to protect your iPhone from scratches or dents. No metal part of the mount touches the iPhone or its screen.

It is outfitted with a standard tripod screw thread of 1/4-20. It also comes with an additional adapter screw of the same size, so you can replace the screw of a base that has a 3/8-16 screw attached if you happen to have an older model tripod.

Some of the user reviews on Amazon show that this little adapter can really be handy for do-it-yourself fans. With a tripod base, you could make a mount for your bicycle, fashion a homemade steady cam, or pretty much anything you could attach the base to.

DaVoice’s universal tripod adapter mount costs just $7.00 on Amazon. Keep in mind that it is just the adapter mount. It does not include a tripod stand.