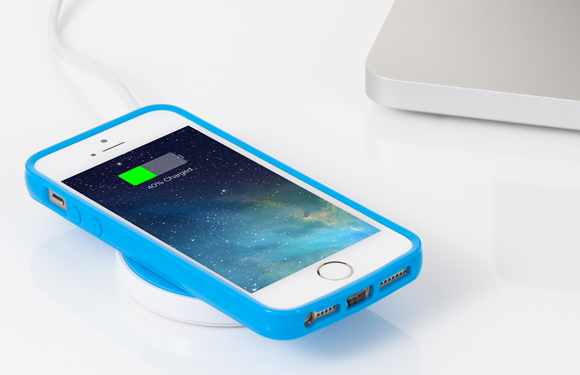 Apple has patented a few wireless charging methods, but thus far it’s only implemented inductive-based wireless charging on the Apple Watch. We’re still required to connect our iPhones to chargers and Apple’s top dogs have made it clear in the past that existing solutions aren’t really the right answer to wireless charging.

Not only that, but Qualcomm’s solution can simultaneously charge multiple devices with different power requirements, say your iPhone and Apple Watch.

Before today, charging a device with a metal exterior has been incompatible with wireless charging technologies.

Qualcomm’s latest breakthrough is based on its WiPower technology and relies on a technology called Near Field Magnetic Resonance, as opposed to existing wireless charging methods that require induction charger which heats up metal objects.

Designed to be compliant with the Rezence standard, it’s the first announced solution to support wireless charging for metal devices. It also uses Bluetooth Smart to minimize hardware requirements.

Asa nice bonus, devices don’t have to be in direct contact with a charging pad, just within the charge area, and the technology can be embedded into things like coffee tables.

As mentioned before, it allows for simultaneous charging of multiple devices with varying power requirements on the same charging area.

Check out what wireless charging for metal devices looks like.

The full suite of WiPower reference designs is available to WiPower licensees, Qualcomm said. Apple is not a WiPower licensee so it remains to be seen whether it will pursue its own wireless charging designs or actually use Qualcomm’s technology.

Earlier this month, Qualcomm reported its quarterly revenue and profit fell 14 percent and 40 percent, respectively, from the year-ago quarter.

The company reported $5.8 billion in revenue and $1.2 billion in operating profit in the June quarter and said it would cut 15 percent of its workforce and $1.4 billion in spending this year.

Apple uses baseband modems from Qualcomm for iPhones and iPads, as well as Qualcomm-built power management and power tracker chips. However, there are rumors that a future Apple-designed processor could integrate Apple’s own baseband modem. The move has the potential to further expose Qualcomm financially for most of its business comes from Apple and Samsung.

After years of using Qualcomm-designed processors, the company has switched to its own in-house designed chip for the Galaxy S6 after finding that Qualcomm’s Snapdragon 810 system-on-a-chip was plagued with overheating problems.