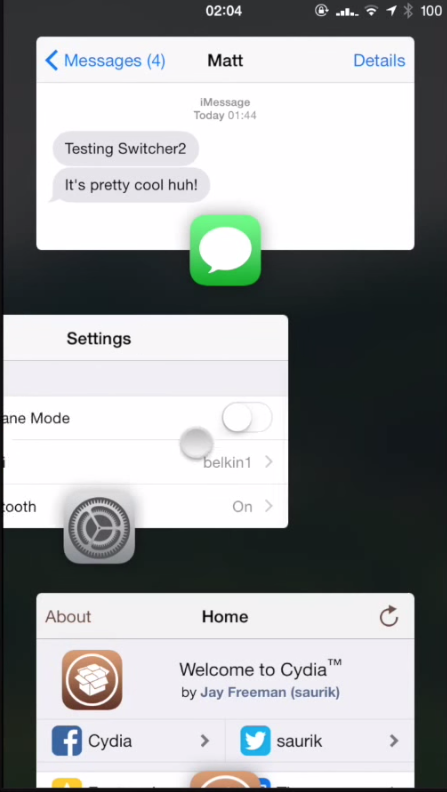 There have been tons of App Switcher tweaks to land on Cydia over the years, but this is certainly one of the more unique looking ones to appear in quite some time. Entitled Switch 2, this upcoming jailbreak tweak brings an expanding-card interface to the iOS App Switcher.

Switch 2’s interface makes it so that you can view up to three apps at the same time, and dismiss apps using simple swipe gestures. Convergence developer, Matt Clarke, has put together a video preview of Switch2 in action. Check it out and let us know what you think about it.

One of the things that makes Switch2 stand out, besides the obvious shrunken card interface, are its animations. The way that the apps contract and expand in and out of the multitasking App Switcher looks particularly slick.

I also like the fact that you can quickly kill apps by swiping down from the App Switcher interface. From there, you’ll find a kill all button that allows you to dismiss all apps at once.

From what we can discern from Clarke’s video preview, Switch2 doesn’t add a wealth of additional and practical features to the App Switcher, but it’s hard to deny how cool it looks in action.

Stay tuned, we’ll be sure to have more about this upcoming tweak as it surfaces. In the meantime, what do you think about Switch2?