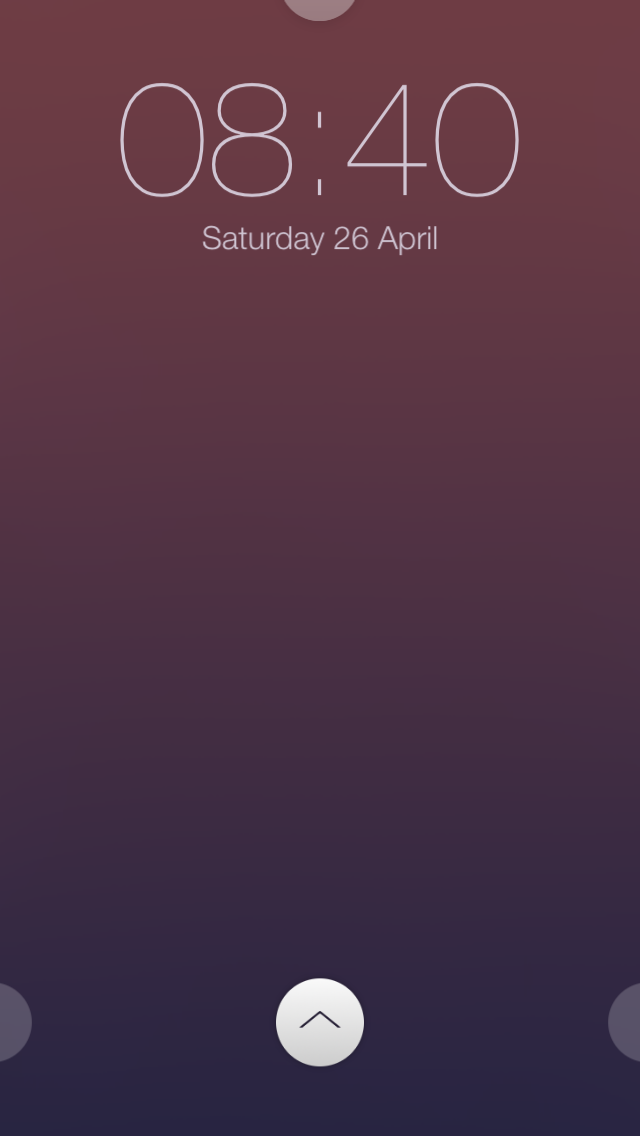 Unless you’ve been living in an underground bunker in Siberia for the last month or so, you’ve likely heard of Convergance. It’s the newly released jailbreak tweak that acts as a complete Lock screen replacement for iOS.

Along with the redesigned Lock screen interface comes widgets, quick shortcuts, custom themes, and HTML support for even deeper custom Lock screen features. Oh, and did I mention that there’s an API for developers to extend Convergance’s features?

Needless to say, Convergance is one of the most hyped tweaks of 2014. Does it live up to the hype? Have a look inside for the details.

After downloading the 2.9 MB package from Cydia’s ModMyi repo, you can head to the stock Settings app to configure the tweak. The settings are fairly robust, which is to be expected for a tweak with so many advertised features, but it never feels completely overwhelming.

There are three main sections included in Convergance’s preferences: theming, interface, and advanced. As you would expect, the theming section allows you to change the look of the Lock screen, and Convergance comes packed with four themes right out of the box. 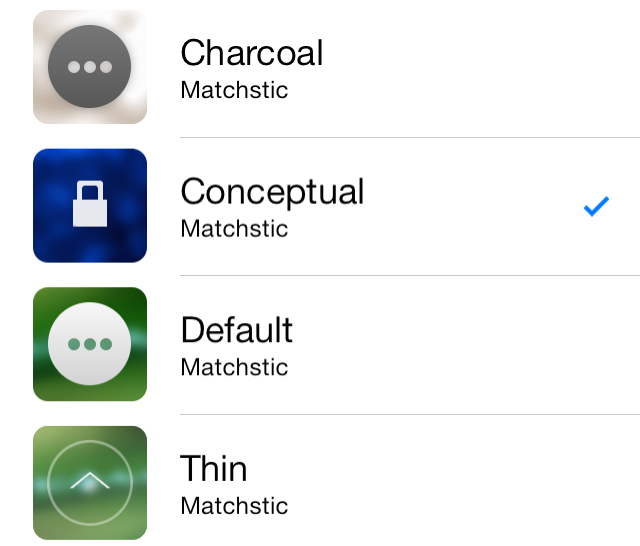 The four themes are as follows: Charcoal, Conceptual, Default, and Thin. Here’s a brief compassion of each of the themes: 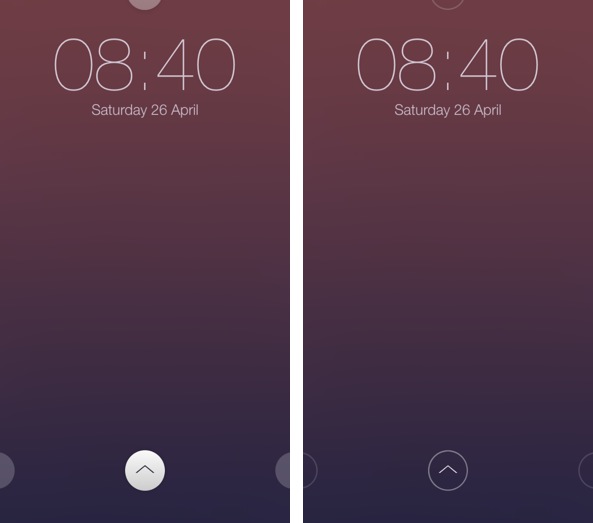 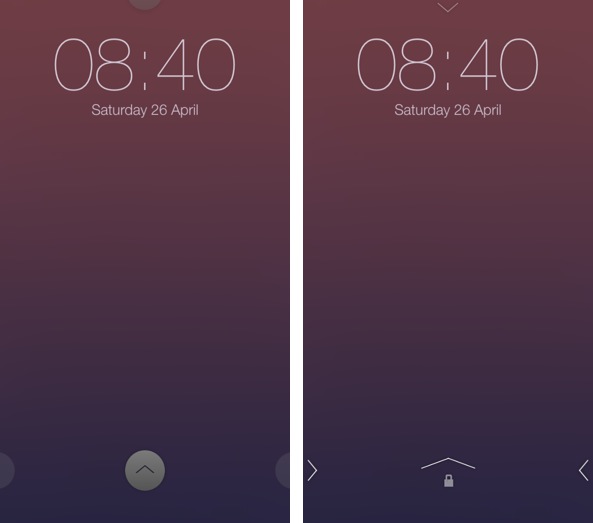 My favorite stock theme is the Default theme, but none of them look totally out of place, except perhaps the Conceptual theme.

The interface section contains settings for background, widgets, toggles, album art, and battery percentage. It basically pertains to anything that you can interact with, or anything that might affect your interaction. 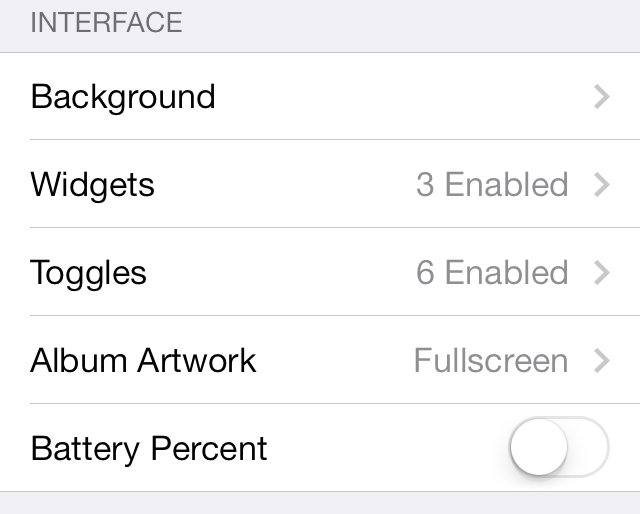 The background panel found in the interface section allows you to establish background blur and use an HTML lock screen. If you’re a LockHTML user (I’m not), you can use features from LockHTML in tandem with Convergance.

The big feature to be found in the interface section is the widgets feature. Out of the box, there are three different widgets to choose from: Calendar, RSS, and Weather. Each widget can be reordered or hidden if desired, and each features its own special set of preferences to configure. 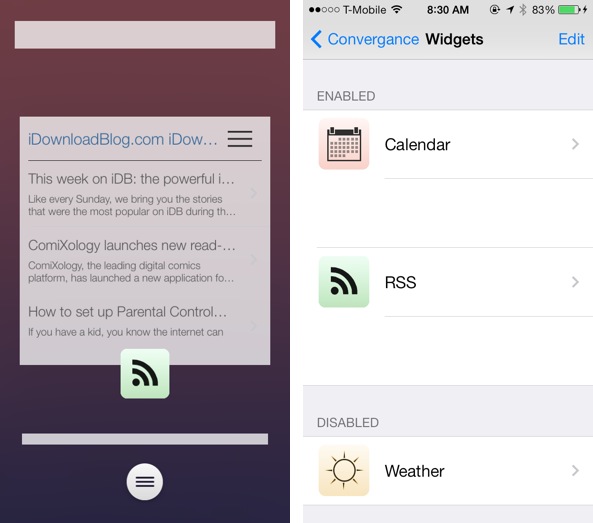 While the inclusion of three widgets is nice, I found them to be a bit underwhelming. For starters, there are only three of them included, and the ones that are included feel like sort of an afterthought. I’m also not a very big fan of the design of the widgets. They work independently of the themes, and are not influenced in any way when switching between themes. 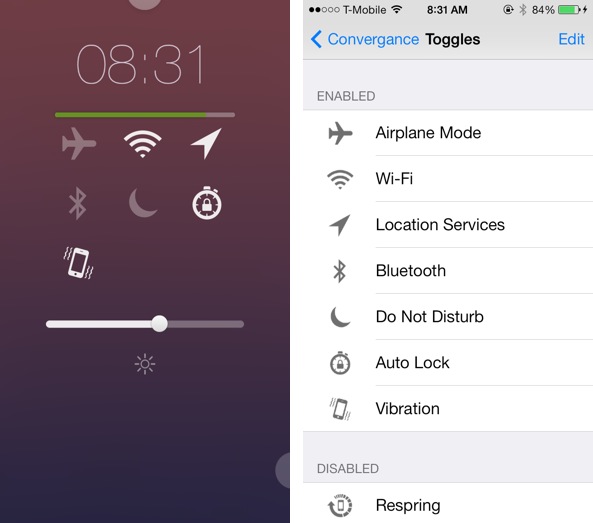 The next item in the interface section is Toggles. The toggles are accessible by using a left to right swipe on the Lock screen. The toggles use the Flipswitch framework, so there are plenty to choose from, and they are all well tested and proven. 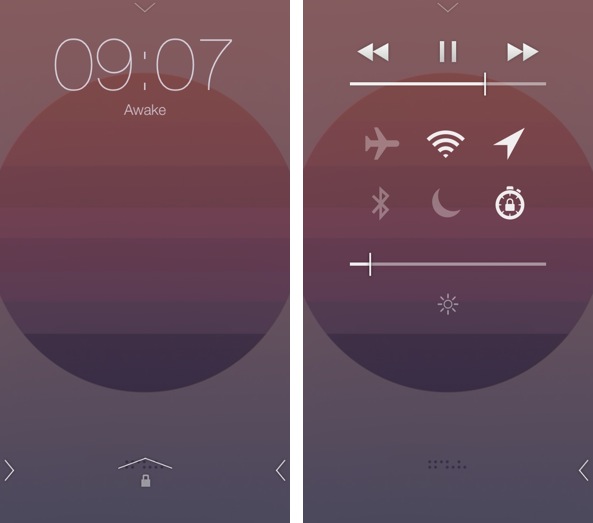 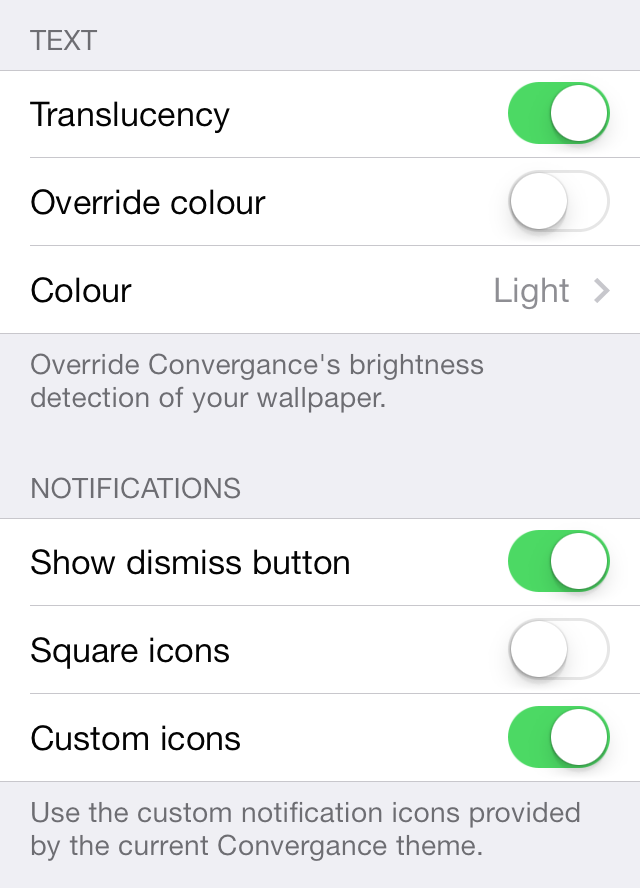 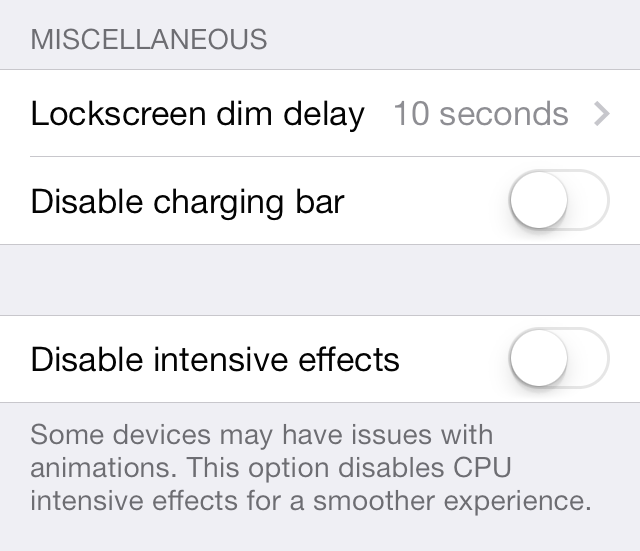 Convergance is a collection of many nice features, and it is true, it is basically a Lock screen replacement for the iPhone. This tweak places four screen swipe points on your Lock screen, so that when you swipe from the top of the screen, bottom of the screen, or the left or right from the screen, an action results.

With all of this said, the basic fundamentals of how we use the Lock screen today have been altered with Convergance. Needless to say, it will take some time to train your mind on how to use these new Lock screen gestures.

Is Convergance practical for daily usage? That’s going to depend on how you use your device. It is nice to have widgets accessible with a simple swipe gesture, but outside of those widgets, there’s not really anything new that couldn’t be done to some degree without Convergance.

It’s no secret that I’ve never been a big fan of tweaks like this. To me, it just feels like a hodgepodge of different features thrown together. Though, I will say that Convergance is one of the nicest looking examples that I’ve seen thus far.

My real beef with this tweak, however, is the lag it adds to the iPhone 5s’ Touch ID sensor unlocking. There is a noticeable 1-1.5 second delay when using Touch ID with Convergance installed. No matter what features it may add, or how convenient it is, this is an absolute deal breaker for me.

If you’re not a Touch ID user, and you feel that you might benefit from the built in RSS, Weather, and Calendar widgets, then perhaps you should give Convergance a try. It’s a nice looking tweak, with some really good looking features, but at the end of the day, it’s not something that I could ever see myself using on a long-term basis.

Despite the almost laughable marketing rhetoric displayed on Convergance’s website, version 1.0 is truly a good starting point. It definitely doesn’t live up to the drummed-up hype of the statement quoted above, but it works decently enough for an 1.0 release.

If the developer can clean up the issues with Touch ID, and other developers hop on board with the tweak’s impressive extensibility features—there’s an API for both Javascript/HTML and Objective-C—then Convergance will have the necessary legs to warrant a purchase. Of course, no one can predict for sure how well the tweak will be supported by developers in the long run, just see ProWidgets for an example of that.

At $2.50, Convergance is priced reasonably enough to warrant a purchase for anyone who wants a different Lock screen look and feel, and who doesn’t use Touch ID. Until the Touch ID issue is ironed out, I’d definitely suggest that iPhone 5s owners wait. For everyone else, feel free to jump in.

What do you think? Have you purchased Convergance?