According to a report Wednesday by The Wall Street Journal newspaper, Apple is putting high hopes into a forthcoming mid-cycle “S”-upgrade to the present-generation iPhone 6 and iPhone 6 Plus smartphones.

The company apparently believes that an ‘iPhone 6s’ and ‘iPhone 6s Plus’ which, among other things, sport new color options and Force Touch technology for sensing deep presses on the screen, should prove massively popular as it reportedly ordered its suppliers to build a record 90 million units this year.

The biggest incremental release in the iPhone’s history, the iPhone 6s along with its bigger brother, the iPhone 6s Plus, should be in ample supply when it releases this fall.

Apple is asking suppliers to build between 85 million and 90 million combined units of the new 4.7 and 5.5-inch iPhone models. Last year, initial production run of the iPhone 6 and iPhone 6 Plus stood at a combined 70-80 million units.

The report adds that both the display size and the screen resolution on the new models will remain about the same, though the company “may offer a fourth color for the aluminum casing of the iPhone.”

Bloomberg previously said Apple had begun early production of the iPhone 6s and iPhone 6s Plus with Force Touch. Volume manufacturing should ramp up later this month as Apple’s supplier Pegatron, which was commissioned to build new iPhones alongside Foxconn, is currently in the process of hiring as many as 40,000 assembly line workers.

“Some component suppliers started manufacturing parts for the new iPhones in large quantity earlier this month,” the people familiar with the matter said.

The iPhone 6s should be 0.2mm thicker compared to the current iPhone 6 model.

Such an imperceptible increase in thickness was allegedly necessary in order to create room for Apple’s engineers to implement Force Touch sensors.

The new handsets are made made from a 60 percent stronger Series 7000 aluminum that Apple developed for the Apple Watch Sport. Although the exterior design will remain mostly unchanged from the current iPhone 6 design, the upcoming handsets should introduce a brand new rose gold color option.

An image of a custom iPhone 6 paint job posted recently to Chinese microblogging site Sina Weibo hints at what a rose gold iPhone 6s could look like. 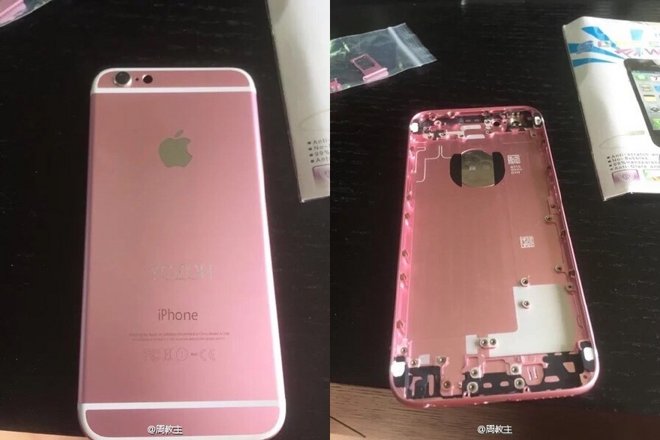 In addition to ”the biggest camera jump ever,” as per John Gruber, the forthcoming iPhones are thought to feature an updated Qualcomm baseband modem for up to twice as fast 4G LTE networking at 300Mbps, improved NFC, faster and more reliable Touch ID, an Apple-designed “A9” processor with 2GB of RAM and more.