A history of iOS 8 usage paints a rosy picture of more or less steady adoption of Apple’s latest and greatest mobile operating system. But according to latest data published Wednesday on Apple’s dashboard for developers, iOS 8 adoption rates have remained flat at 84 percent of iPhone, iPod touch and iPad devices in the wild, as measured by the App Store on July 6, 2015.

Two weeks ago, the same 84 percent figure was captured by Apple, indicating that the number of users who have upgraded from previous iOS editions to iOS 8, or bought a new device with iOS 8 pre-installed, wasn’t enough to move the needle.

More interesting than that, however, is the latest data point by analysts Mixpanel which basically tells us that the recently-released iOS 8.4 software update now accounts for 40 percent of all iOS usage, just one week after release. 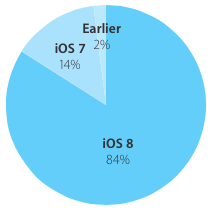 The above chart is true for today, too.

As mentioned before, Mixpanel data suggests that iOS 8.4 is now powering a cool forty percent of iOS devices in the wild, an astounding achievement for what is basically a point iOS release. I would speculate that the vast majority of people who ran iOS 8.x have upgraded to iOS 8.4 to check out Apple Music.

Another way to look at it: iOS 8.4 has managed to match the adoption rate of Android KitKat and Jelly Bean, just one week after its release and despite the fact that these Android editions have been around for two or more years.

But that doesn’t come as a shock.

The chart below depicts how quickly consumers have been upgrading to iOS 8 since its release in September of last year.

According to Google’s own Android distribution numbers, Android 5.0 and 5.1 Lollipop have at long last managed to break past the twelve percent mark, as determined by monitoring Play Store access data during a 7-day period ending on June 1, 2015.

Lollipop was introduced more than a year ago. 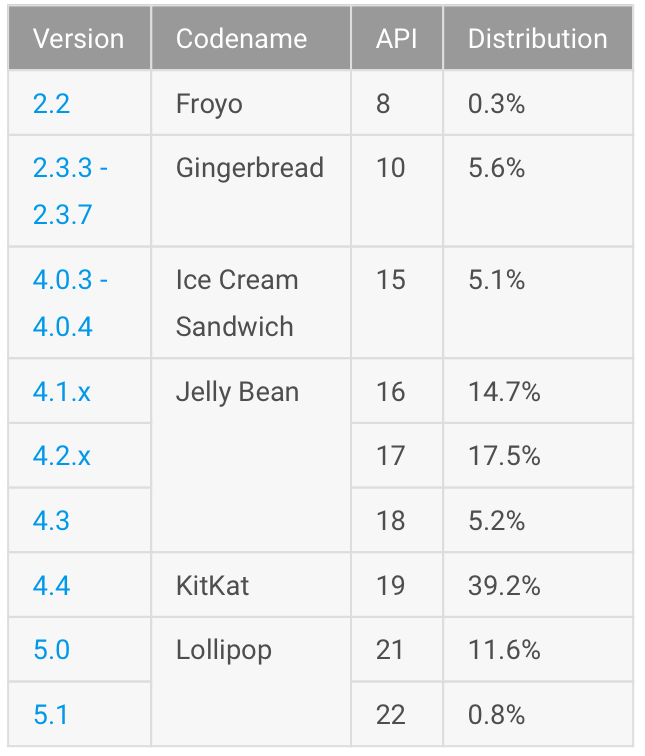 Android 4.1.x Jelly Bean versions account for more than one out of each three Android devices that have accessed the Play store recently, or 37.4 percent installed base.  Android 4.4 KitKat, which is almost two years old now, powers about four out of each ten Android smartphones and tablets out there.

An incredible 63 percent of Android devices support the now outdated OpenGL 2.0 graphics subsystem, with forty percent of devices having HDPI screens and more than 83 percent of them having normal-sized screens.