Apple is aiming for a cool hundred million subscribers for its forthcoming streaming-music service, as reported Monday by both The New York Times and The Associated Press, potentially giving Apple Music an annualized revenue in the ballpark of $12 billion.

How does this figure compare to Spotify, the world’s top streaming-music service hailing from Sweden? Well, Spotify has sixty million active listeners but only fifteen million paid subscribers worldwide, 4.7 million of which were in the U.S. as of last December.

The report notes that Beats Music will be eventually folded into Apple Music. The Cupertino firm will also flex its marketing muscle to persuade its huge installed iTunes user base into trying out the new music thing, which should cost ten bucks per month and, crucially, offer a free three-month trial.

“Beats users will be migrated over before eventually closing down, and buyers of songs and albums on iTunes will also be presented with the option to purchase a subscription instead,” reads the report.

Some more stats to put Apple’s internal estimate in context:

A new streaming-video package and upgrades for the Apple TV hardware have been delayed and won’t be shown off at WWDC as the firm is still negotiating with broadcasters, according to reports by both the New York Times and Re/code.

If you had any doubts about the ‘Apple Music’ name, here’s a WWDC name tag of Apple’s Chief of French content for Apple TV, who has added Apple Music to his responsibilities. 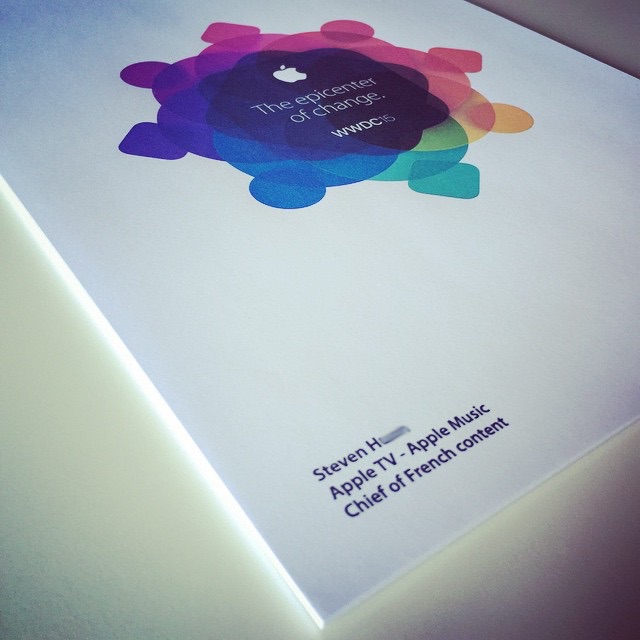 Apple’s new music strategy couldn’t come soon enough: according to latest data by the International Federation of the Phonographic Industry, overall sales of music downloads sold on iTunes and through other digital outlets fell eight percent last year to $3.6 billion.

Apple is expected to announce the new music service at its annual conference for software developers, which kicks off today at 10am PST in San Francisco.