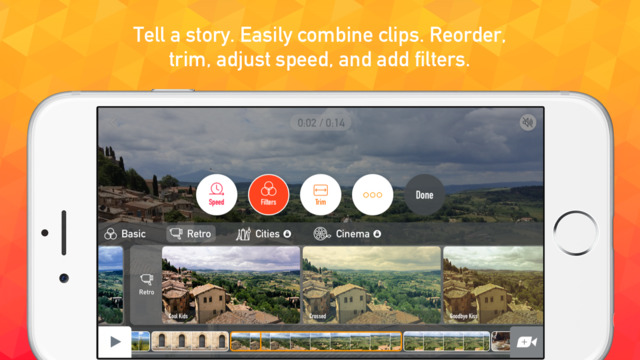 Camera+ developers Lisa Bettany, Scott Meinzer and Karl von Randow today announced a new app called ‘Vee for Video.’ It essentially hopes to accomplish what the popular Camera+ app has for photos on iPhone, for videos.

Bettany tells BGR that Vee was born out of the team’s desire for an app that let you shoot, edit and share videos seamlessly. They considered adding video to Camera+ at one point, but ultimately decided to build a standalone app.

Vee is everything you’d want in a premium app. It’s beautifully designed, with an intuitive interface that makes complex tasks like editing clips simple. You can work on multiple videos at once, and shoot and edit in the same screen.

Videos can be shot in up to 1080p Full HD, with a 16:9 aspect ratio and up to 240fps on an iPhone 6 or 6 Plus. The app also features 18 live video filters, with more available via IAP, allowing you to change the look of your video on the fly.

Other features include the ability to add a soundtrack to your video from your iTunes library, and various focus and exposure tools. There is also a grid and ghost tools, to help keep your shot straight and in line with the previous frame.

If you want to check it out for yourself, you can find Vee for Video for both iPhone and iPad in the App Store for $1.99.