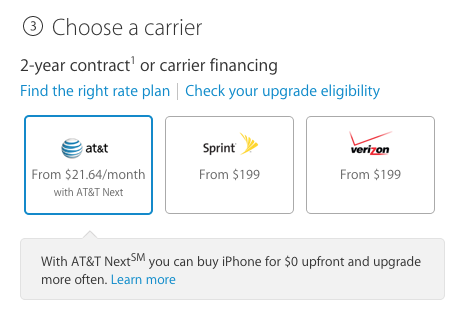 As reported earlier this week, Apple has stopped selling new iPhones to customers on a two-year contract with AT&T as of today.

As first noted by MacRumors, subsidized $199/$299 prices for new iPhones on a two-year AT&T contract have been removed overnight and replaced with the carrier’s financing program called AT&T Next.

AT&T Next has now become an exclusive financing option for new AT&T iPhone purchases through Apple. With Next, you can purchase a new iPhone for $0 down with installment payments spanning 20, 24 or 30 months.

Once the full retail price of your iPhone has been paid through AT&T Next after 12, 18 or 24 installments, the carrier will let you trade in your phone for a new one.

AT&T iPhone subsidies should remain in effect for business purchases through Apple’s stores. MacRumors provided the following price breakdown for latest iPhones on AT&T Next:

These financing options are available through both Apple’s online and brick-and-mortar stores. For what it’s worth, two-year contracts through Verizon and Sprint remain available on the Apple Online Store.

Separately, the rumor-mill has indicated AT&T would kill subsidies for all smartphones, not just iPhones. According to Droid-Life last month, two-year contracts will remain available through AT&T’s website, company-owned retail stores and customer service.

It was reported earlier this week that Verizon will be killing two-year contract subsidies by the end of this summer. As a result, those purchasing an iPhone via Verizon’s Edge program will no longer be eligible for the connected Edge Up feature.

This also means that Verizon customers who became eligible for early hardware upgrades after 18 months will move back to 24 months for the standard Edge program.

Ralph de la Vega, AT&T’s CEO, said three days ago that the two-year contract and the subsidized cellphone, like unlimited data plans, are on the endangered species list.

“I think it is one of those options that is going to go away slowly,” he told Re/code on Tuesday. The shift will happen, de la Vega said, “not because we insist on it but because customers will choose it less often.”