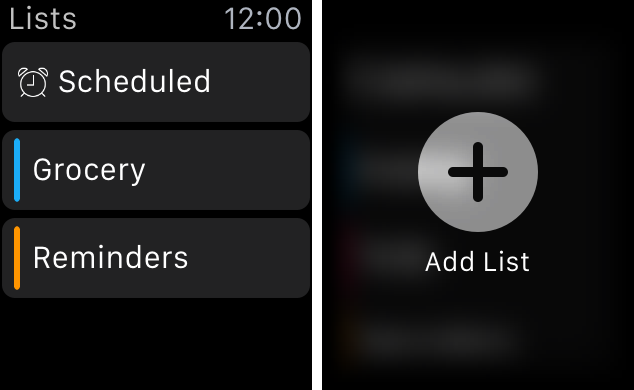 Several first-party apps are noticeably missing from Apple Watch, with Reminders and Podcasts being probably the most obvious. I’m confident Apple will bring these apps to Apple Watch sooner than later, but we’re left dealing with workarounds and third-party apps to fill our needs for the time being.

Reminders Nano is one of these apps that picks up where Apple left off. Bringing a comprehensive yet simple reminders app to Apple Watch, Reminders Nano looks like something Apple itself would have shipped.

Reminders Nano syncs with your iPhone’s stock Reminders app. After granting the Reminders Nano iPhone app access to your reminders, launch its companion app on your Apple Watch and you will see all the lists and reminders you have created previously on your iPhone or iPad.

Although you can use the iPhone app to create reminders, the beauty of Reminders Nano lies in its Apple Watch app. Not only it allows you to see reminders you have previously created, but it also allows you to create lists, add items and reminders to these lists, and mark items as completed.

Creating a new list is as easy as using Force Touch and tapping Add List. Using dictation, simply tell Siri what you want your new list to be labeled as. Once you have created a new list, you can also use Force Touch to add items to it, as seen on the screenshots above.

Read: How to manage reminders on Apple Watch

Of course you can also create reminders that have a time stamp attached to them. For example, you can tell Siri to “remind me to call Mom tomorrow at 10am.” This kind of time-based reminders will be added to the Reminders list. Unfortunately, you cannot create time-based reminders directly from Reminders Nano, and you will have to rely on Siri for that.

When you are in list view, you can also use Force Touch and select Show Completed. As suggested, this will show all your reminders/items within a list (both completed and pending).

For those wondering, Reminders Nano doesn’t let you delete a list from Apple Watch. To do that, you will have to either use the app or the stock Reminders app.

The app Apple should have shipped with Apple Watch

As previously mentioned, Reminders Nano looks and feels like an app Apple itself would have made available on Apple Watch. It’s simple, intuitive, and completely matches the overall design language of first-party applications for Apple Watch.

There are apps out there that integrate reminders as part of their offering (Fantastical 2 for example), but if you are looking for a standalone reminders app, then Reminders Nano is your best option at this time. It is available for $0.99 in the App Store, and these will be 99 cents well spent.