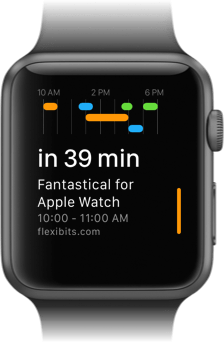 Developer Flexibits has made a name for itself with Fantastical, an award-winning calendar replacement for the iPhone, iPad and Mac. Today, an important update to the iPhone app was pushed, bringing out a newly-added WatchKit extension so you can at last run Fantastical on your wrist!

This update is available to all existing users of Fantastical for iPhone at no additional cost.

You must be wondering what took them so long, right? I mean, Flexibits was among rare developers without an Apple Watch app in time for the device’s April 2015 launch.

“We want to understand precisely what problem we’re solving,” Flexibits co-founder Michael Simmons tells me via a Skype chat.

The net result of their undertaking is arguably the fastest and friendliest calendar experience on the wrist and that’s saying a lot given Fantastical competes with Apple’s stock Calendar app which comes preloaded on the wearable device.

“We want to be better than built-in Calendar,“ Simmons quipped.

For starters, Fantastical’s expressive natural language processing engine used to quickly create new events and reminders with your voice is now available on your wrist.

I’m also liking a nicely designed glance which can be customized through Fantastical for iPhone. This is what it looks like. 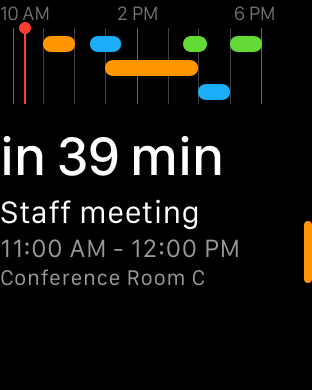 Tapping the glance itself opens up your next event, or the list itself (as set up in Fantastical for iPhone). As I said before, Fantastical for Apple Watch supports dictation.

With dictation, you can say something along the lines of “lunch with Seb in San Francisco on Monday” or “todo buy groceries at 5pm” or some such and trust that Fantastical will parse your input and automatically create an appropriate event or a reminder for you, ready to check off. 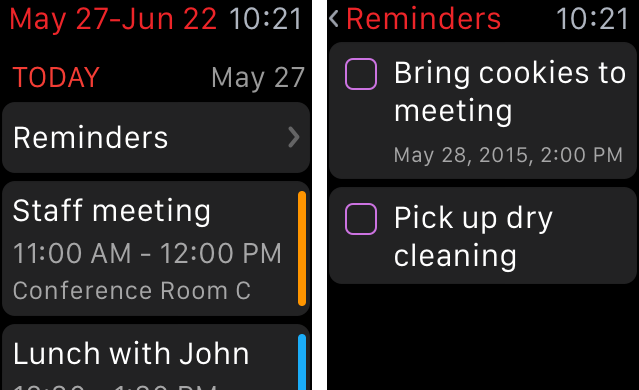 Seen above: Fantastical’s friendly list view at left, and reminders at right.

For those wondering, creating new events takes advantage of Apple’s pressure sensing technology called Force Touch. Just press the screen firmly and up pops a hidden option to create a new event. Alternatively, turn the Digital Crown to scroll the view until you see the Create Event button, as shown below. 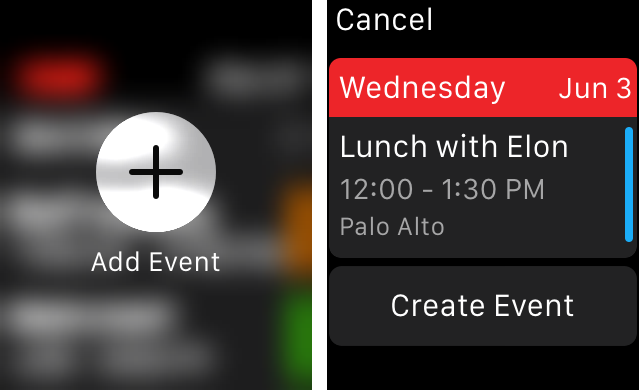 Aside from the Apple Watch component, Fantastical 2.3 for iPhone is localized in English, French, German, Italian and Spanish.

Localization doesn’t just encompass the user interface, menus and error messages: Fantastical automatically detects the entered language for an event or reminder regardless of the system’s language setting.

Here’s a fun video overview of Fantastical for Apple Watch.

For more information, check out the official Fantastical 2 for Apple Watch webpage.

Fantastical 2 for Mac, a major rethinking of the app with OS X Yosemite support and a host of goodies, was released in March 2015.

Read my review of Fantastical 2 for Mac here.

Speaking of Fantastical for Mac, a minor update to the app was pushed today with the following changes:

Fantastical for iPhone is a 20.9-megabyte download that requires iOS 8.0 or later. Apple Watch functionality requires an iPhone with iOS 8.3 or later.

The Mac edition of Fantastical will set you back $39.99.