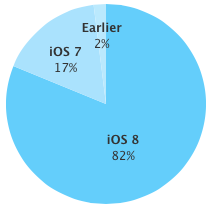 After passing the eighty percent mark two weeks ago on the heels of Apple Watch launch, and less than a month before WWDC 2015, Apple’s mobile operating system has been found to now power 82 percent of iPhone, iPod touch and iPad devices in the wild.

The new data comes via the official App Store Distribution dashboard, which is publicly available on Apple’s portal for developers. iOS 7 has kept its seventeen percent share from two weeks ago while older versions of the software continue to comprise about two percent of legacy hardware out there.

It’s worth reiterating that these numbers were derived from iOS devices that accessed the App Store on May 11, 2015.

The numbers suggest that the latest iOS 8 gains may be contributed to new device purchases rather than people upgrading their existing iPhones, iPads and iPods from iOS 7 to iOS 8.

As for Google, the official Android dashboard indicates that Android 5.x Lollipop is now on 9.7 percent of Android smartphones and tablets in the wild.

These stats were collected during a seven-day period ending on May 4, 2015, and include only Android devices running Google services and accessing Play Store. Each snapshot of data represents all the devices that visited the Play Store in the prior seven days.

Because the data is gathered from the new Google Play Store app, which supports Android 2.2 and above, devices running older versions are not included. In addition, forked Android versions and those which don’t run Google Play services, like the low-cost handsets predominantly used in China, are also excluded from Google’s official numbers.