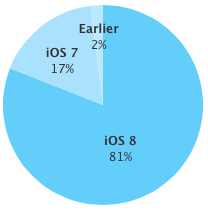 After experiencing a slowdown following a record-smashing Christmas quarter, the rate of iOS 8 adoption is notably picking up speed again.

According to the official App Store Distribution dashboard, publicly available on Apple’s portal for developers, about 81 percent of iPhone, iPod touch and iPad devices in the wild are now running iOS 8.0 and later. Jut two weeks ago, the pace of iOS 8 adoption stood at 79 percent of active devices.

A notable uptick could be explained by the Apple Watch, which requires the iPhone 5 and later running iOS 8.2 and later. For those wondering, Apple measures active devices by monitoring iPhones, iPads and iPods that access the App Store.

Some seventeen percent of devices are still using iOS 7, as measured by the App Store on April 27, 2015, representing a two-point decrease from the nineteen percent of iOS 7 devices two weeks ago.

The stats likely indicate that the bulk of growth in terms of iOS 8 adoption rate over the past two weeks came from people who’ve upgraded from iOS 7 — again, likely in order to be able to use their brand new Apple Watch.

Two percent of devices are still on iOS editions older than iOS 7.