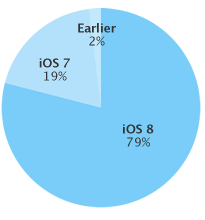 Various versions of Apple’s iOS 8 mobile operating system are now running on 79 percent of devices in active use, as measured by the App Store on April 13, 2015. The freshest stats were churned out Tuesday from the App Store Distribution webpage publicly available on Apple’s portal for developers.

iOS 7 is now found on nineteen percent of devices, with earlier iOS versions running on two percent of iPhones, iPads and iPod touches in the wild.

Putting the figure in context, the iOS adoption rate has inched up just one percentage point from the 78 percent milestone reported two weeks ago. Back then, twenty percent of devices were running iOS 7.

That said, it’s clear that much of organic growth in terms of iOS 8 adoption comes from either new iPhone purchasers or existing owners of iOS 7-devices who have upgraded to iOS 8.

In the law of big numbers, every point counts.

And when you have nearly 800 million iPhones and iPads used in the wild, a single percentage point translates into tens of millions of new iOS 8 installs.