Having been tracking iOS 8 adoption rates on a regular basis, it’s clear now that the pace of user adoption of the latests and greatest iOS version has been slowing down since its peak in the holiday quarter of 2014.

According to the most recent numbers provided by Apple itself on the App Store Distribution webpage, iOS 8 is now installed on 78 percent of iPhone, iPad and iPod touch devices in the wild, a marginal increase over the 77 percent adoption rate from two weeks ago.

iOS 7, the prior major edition of Apple’s mobile operating system sporting top to bottom design overhaul, is now on twenty percent of devices, unchanged from the previous data point from two weeks ago.

Older iOS versions now make up for two percent of iPhone, iPads and iPod touch in the wild instead of three percent like before, according to Apple’s up-to-date figures as measured by the App Store on March 30, 2015. 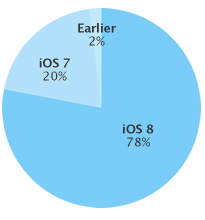 And how does Android stack up against iOS in terms of user adoption?

Google’s software has always suffered from the dreaded fragmentation problem and it shows in usage data. According to the official dashboard available at Google’s Android Developers website, Android 5.0 Lollipop is found on just 3.3 percent of devices nearly a year after it was first introduced.

Android 4.4 KitKat remains the most used version of Android with 40.9 percent of active devices, followed by different versions of Android 4.1.x Jelly Bean. Google’s data was collected from the new Google Play Store app during a seven-day period ending on March 2, 2015.

Because the new Play Store app requires Android 2.2 and above, devices running older versions are not included in the data.

As a caveat, keep in mind that Google’s stats exclude devices that have not visited Play Store, including forked Android devices such as Amazon’s Fire tablets, smartphones and media streamers, white-label devices and millions of devices sold in Asia that come preloaded with third-party application stores and don’t run Google services.

Much of iOS 8’s initial growth is owed to the stellar sales of the iPhone 6 and iPhone 6 Plus. As sales of current iPhone models starts cooling off amid the usual seasonalities and as next-generation models start looming, so does iOS adoption rate slows.