Our regular tracking of adoption rate figures is back with up-to-date, fresh stats straight from Apple indicating that iOS 8 is slowly but surely finding its way to users iPhone, iPod touch and iPad devices.

As of today, Apple’s latest mobile operating system is now powering 77 percent devices in the wild, a modest improvement over the 75 percent adoption rate as measured by the App Store two weeks ago.

As iOS 8 adoption is chugging along at a decent pace, iOS 7 continues to lose ground with 20 percent of iPhones, iPads and iPod touches in the wild running last year’s redesigned mobile operating system.

The figure represents a drop by 2 percentage points from the 22 percent figure measured two weeks ago. Three percent of iOS devices are on iOS versions older than iOS 7, same as before. 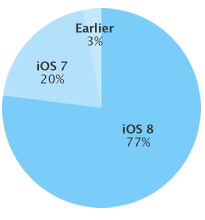 iOS 8 adoption clearly continues to benefit from strong sales of Apple’s latest iPhones with bigger screens, the iPhone 6 and iPhone 6 Plus, even though recent iOS updates have made efforts to reduce the amount of free storage space required to install OS updates.

Even though iOS 8 clearly isn’t growing as fast as it used to when it was released last September, its adoption is miles ahead of Android. Over in the Google land, they’re still struggling to put the latest Android 5 Lollipop software to as many devices as possible.

Google’s own Android distribution data, which measures access to Google Play Store, shows that Android 5.0 Lollipop is now found in a meager 3.3 percent of smartphones and tablets. The data has been collected during a 7-day period ending on March 2, 2015.