Based on Apple’s official data shared at its portal for developers, iOS 8 is now running on 75 percent of iPhone, iPod touch and iPad devices, as measured by the App Store on March 3, 2015, good for a two percentage-point increase.

Two weeks ago, Apple’s mobile operating system was adopted by 73 percent of active device owners, representing a tiny one percentage point increase from the 72 percent mark recorded a month ago.

As seen on Apple’s pie chart below, iOS 7 is now powering 22 percent of devices, representing a decrease from 24 percent registered two weeks ago. Three percent of iPhones, iPod touches and iPads are on iOS versions older than iOS 7, same as before. 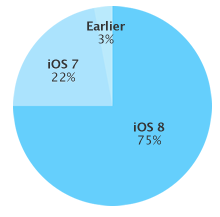 The numbers suggest that iOS 8 gains came at the expense of iOS 7 device owners who have upgraded to Apple’s latest and greatest mobile operating system. By comparison, Google’s Android 5.0 Lollipop software saw an increase from 1.6 percent last month to 3.3 percent usage.

The numbers are based on Google’s own Android distribution data as determined by data collected during a 7-day period ending on March 2, 2015. One thing to keep in mind: the data is gathered from the new Google Play Store app, which supports Android 2.2 and above.

This means that devices running older versions of Android are excluded, as are a myriad of white label phones sold in emerging markets like Asia that don’t come preloaded with the Google Play Store app and don’t run other Google services by default.

Google on its part claims that in August 2013 versions older than Android 2.2 accounted for about one percent of devices that checked in to Google servers (not those that actually visited Google Play Store).