Using a case on iPhone or iPad is a no brainer for many people because they are devices that are subject to accidental damages, including slipping out of your hand and hitting the concrete floor, or getting scratched while in your pocket. If using a case on these devices makes lots of sense, there is, at first look, less incentive to use a case on Apple Watch.

But that’s just at first look though, because after talking to a few of my friends that do have a more active lifestyle than I do, most seemed to agree that, should they own an Apple Watch, they would likely use a case on it to not only protect the device from the elements, but also to protect it from their own inflicted damages.

My friend Guy, for example, works with his hands and handles tools all day. Using an Apple Watch without a case is not even an option if he wants to keep it intact. So is the case for my friend Kelsey who works out a lot and is worried she might accidentally hit the watch and scratch it on one of the many workout equipments she uses. Whatever your use case might be, if you have a need for extra protection, you might want to take a look at this selection of Apple Watch cases by Spigen.

We want to thank the folks at Spigen for sending these samples for review. These are actually the very first Apple Watch cases we got to try on, as manufacturers are still working on getting the production lines running. At the time of writing, all these cases were available right away on Amazon where they are offered at the same price, or cheaper than on Spigen’s website. 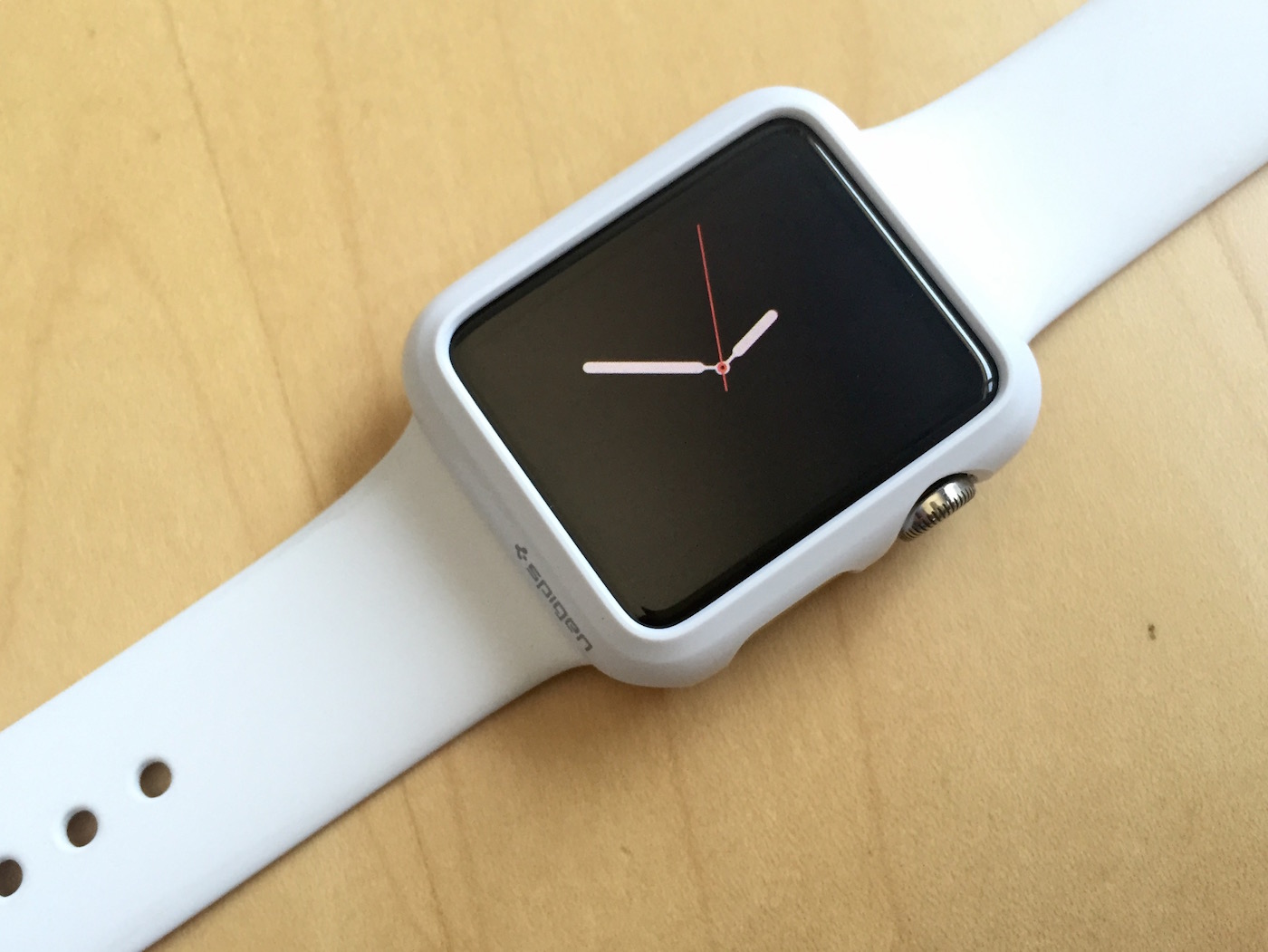 This is probably my favorite case of them all here. Offering a minimalist look, the Thin Fit is made of premium polycarbonate to provide a solid, yet slim and lightweight level of protection. Unlike other cases, the Thin Fit can be quickly snapped on and off Apple Watch without removing the watch off your wrist. It fits securely around the the display and leaves the buttons as well as the back sensors exposed.

Thin Fit case for Apple Watch is available on Amazon for $14.99. It comes in silver, black, white, or gold for both the 38 and 42mm versions of the watch. 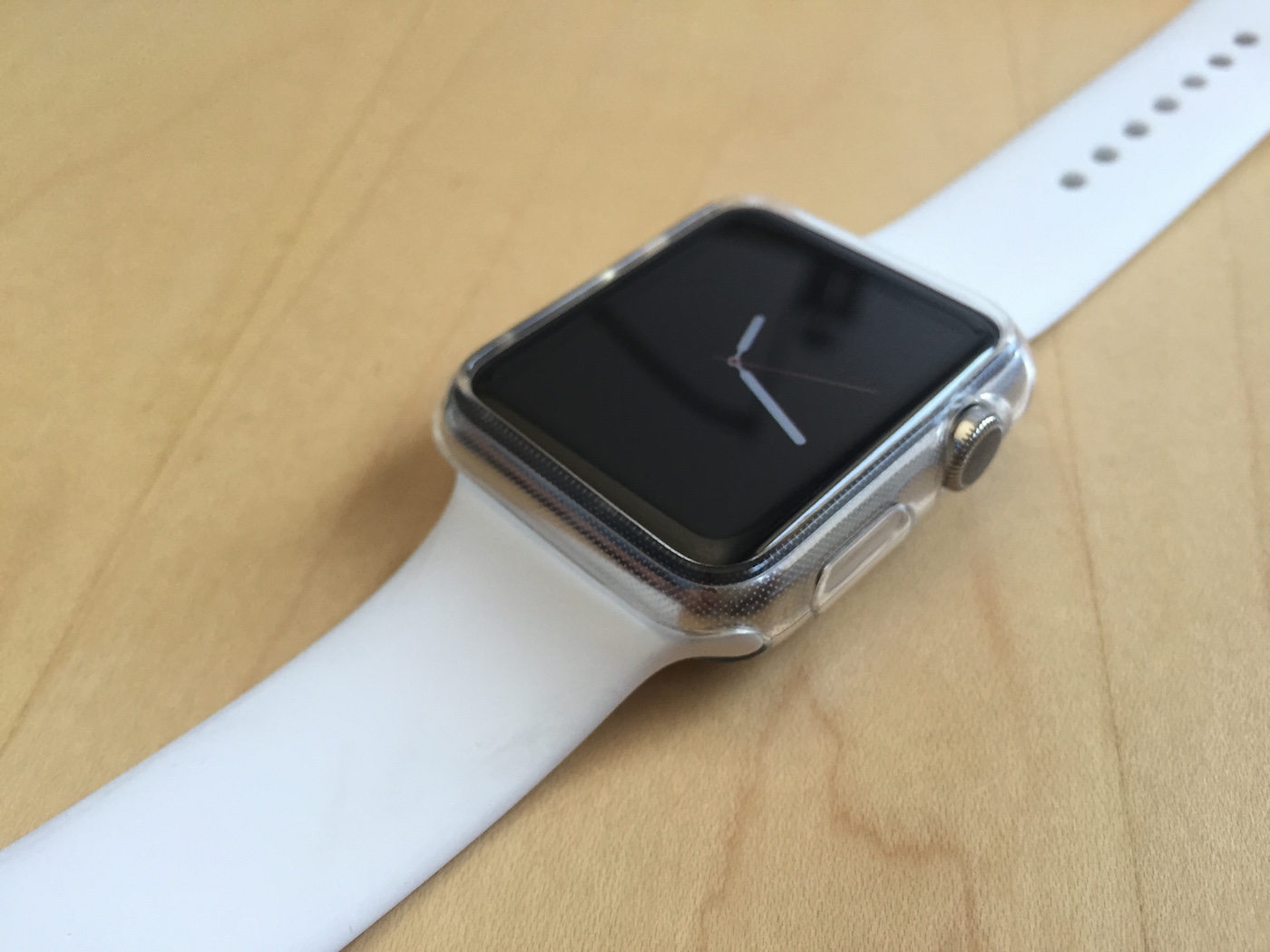 The Liquid Crystal case is another one of my favorites as the clear material used for this Apple Watch case is very discrete and barely noticeable, something I always favor in a case. Its minimalist approach doesn’t translate to minimalist protection though, as it wraps all the way around the watch, leaving the screen, buttons, and sensor on the back opened. Made of flexible clear TPU letting the finish of your watch shine through, the Liquid Crystal case is 0.8mm thin and adds negligible weight or bulk to Apple Watch. This clear level of protection is particularly justified if you want protection while still keeping the overall look of your Apple Watch intact. 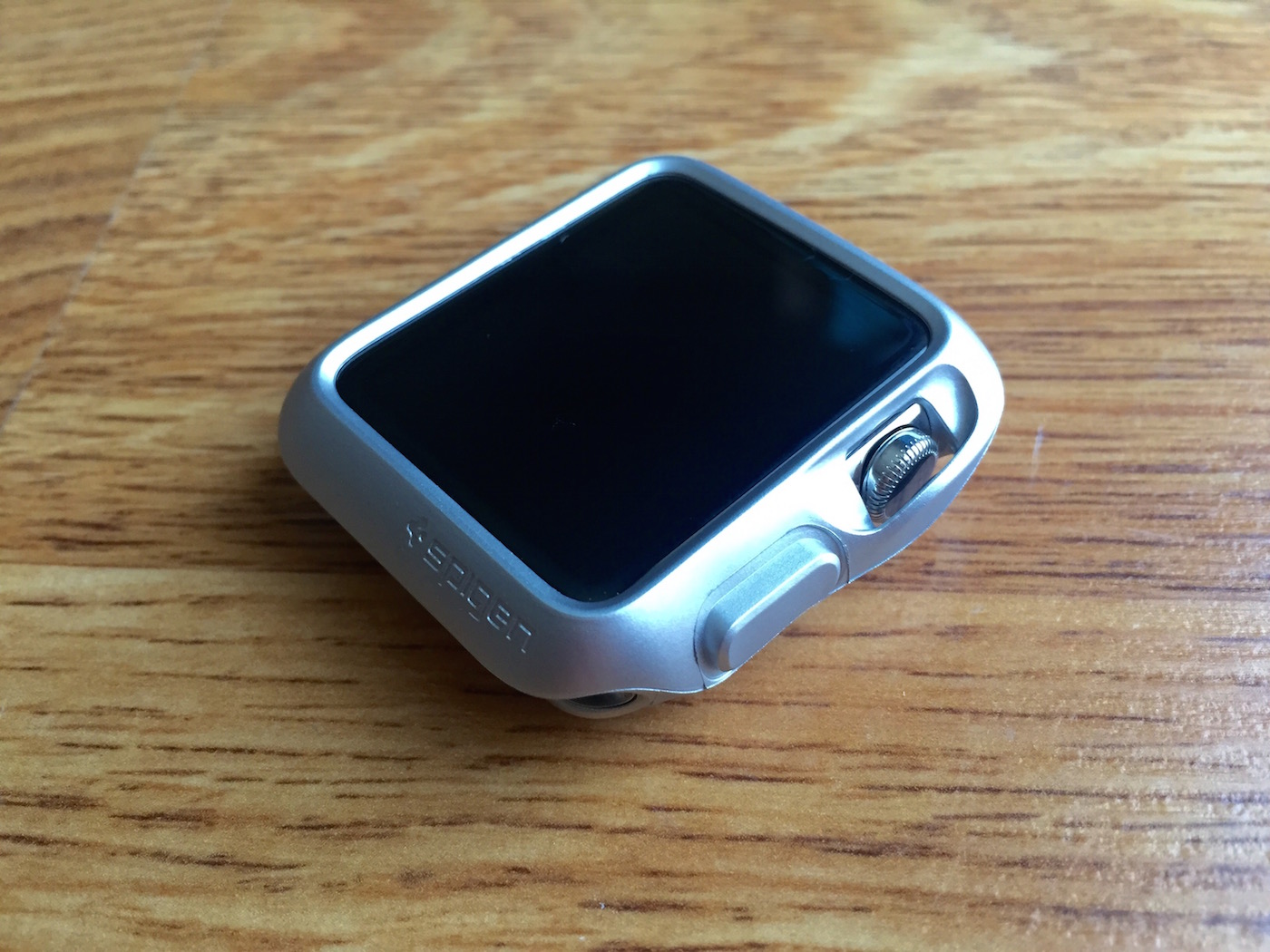 We’re getting into serious protection territory with the Slim Armor. The single-layered TPU case offers durable flexibility for easy installation and removal from the watch. Spigen wittily says it offers “slimplified” protection from scratches without the bulk, but I tend to disagree as the Slim Armor adds noticeable bulk to the watch, which is probably due to the fact that it completely covers the side button and most of the Digital Crown. Usage of both buttons is still easy though. For added protection, this case comes with two screen protectors.

Slim Armor case for Apple Watch is available on Amazon for $17.99. It comes in either gold, silver, or white for both the 38 and 42mm Apple Watch. 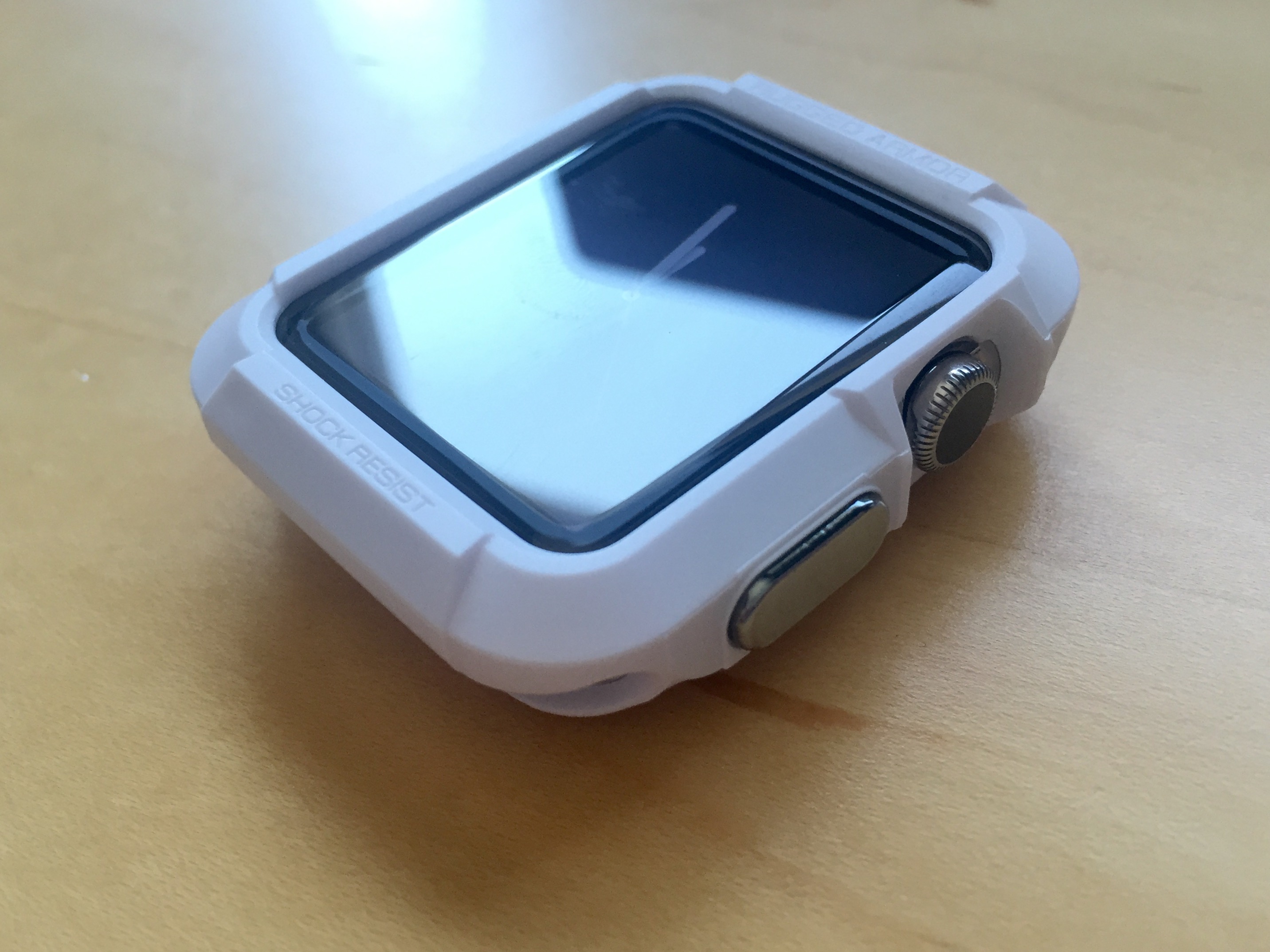 Stepping it up one more notch, the Rugged Armor case will effectively turn your Apple Watch in a Stormtrooper, or a G-Shock, depending on how you look at it. Made of the same flexible TPU, this case will definitely provide scratch, scuff, and shock protection. Wrapping all around the watch and leaving the back sensors as well as the Digital Crown exposed, the Rugged Armor has a metalized cover for the side button. Just like the Slim Armor, the Rugged Armor comes with two screen protectors.

Rugged Armor case for Apple Watch is available on Amazon for $14.99. It’s available in black or white for 38 and 42mm Apple Watch. 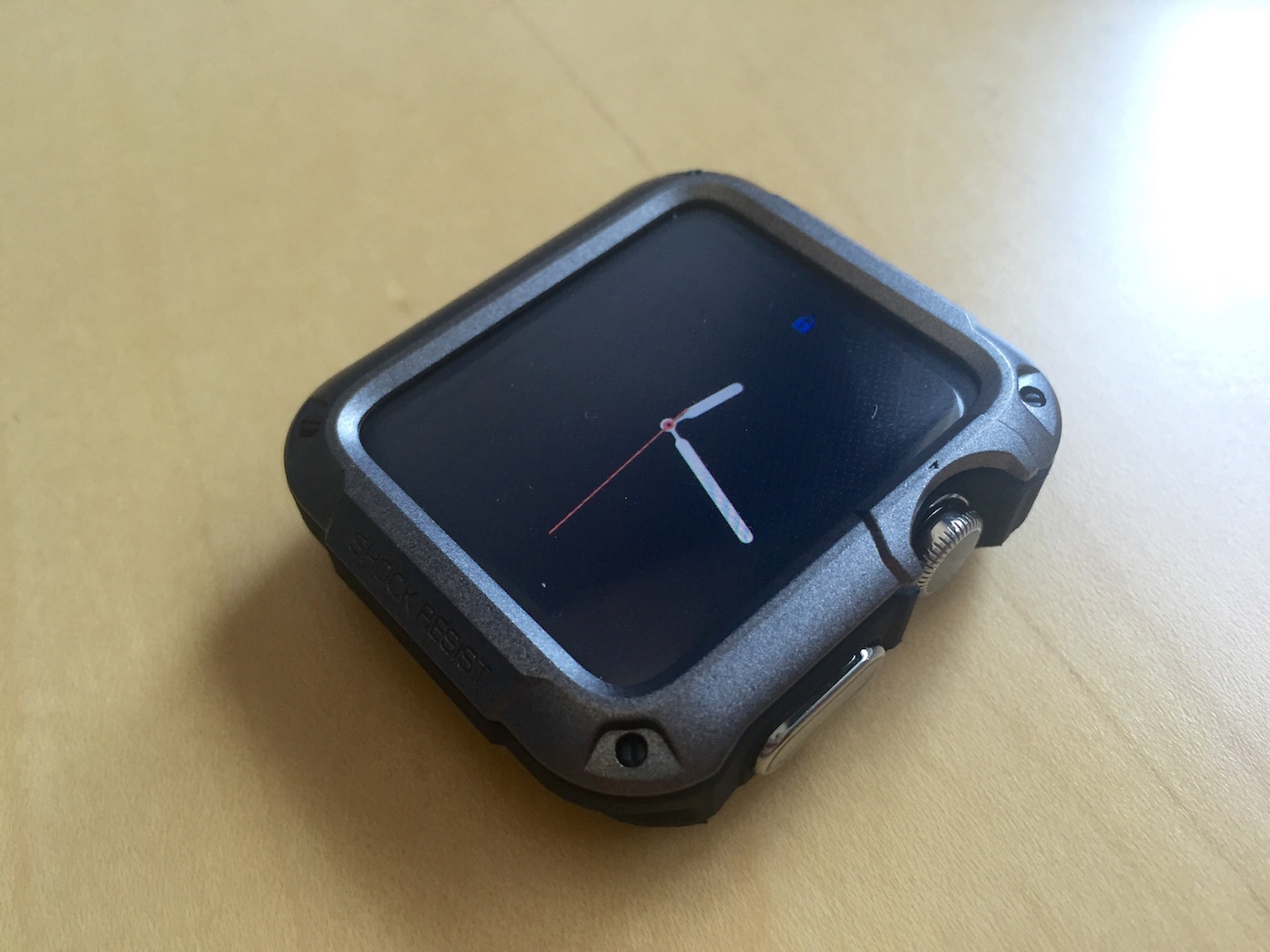 This is without a doubt the beast of the beasts, providing the highest level of protection from the entire lineup. But of course, it comes with its fair share of added bulk, although it must be noted that added weight wasn’t noticeable. Constructed with high quality polycarbonate and TPU for a bolstered design, the Tough Armor will have no problem absorbing shocks, and avoid scuffs and scratches. The case comes with its own built-in screen protector, which from my experience doesn’t impair the touch screen functionality at all. If you want to go for the rugged look, or if you want the most amount of protection a Spigen case has to offer, then this one is for you.

Touch Armor case for Apple Watch is available on Amazon starting at $18.99. It comes in either orange, gold, or gunmetal colors. It is only available for the 42mm Apple Watch at this time.

We’ll be covering more cases for Apple Watch as well as other accessories as they become available. In the meantime, you might want to check out other roundups: