Greenpeace released a 2015 update for its ‘Clicking Clean’ report this morning, and Apple is once again leading the pack. The report gives tech companies a Clean Energy Index score based on factors like commitment to clean energy and energy transparency, and the Cupertino firm received a perfect score.

Apple scored 100% CEI, with A’s across the board for its energy efficiency and deployment of renewable energy at its data centers and facilities around the world. Other companies didn’t fair so well, though, with Google scoring a 46% CEI, Microsoft at 39%, Amazon at 23% and eBay all the way down at 10%. 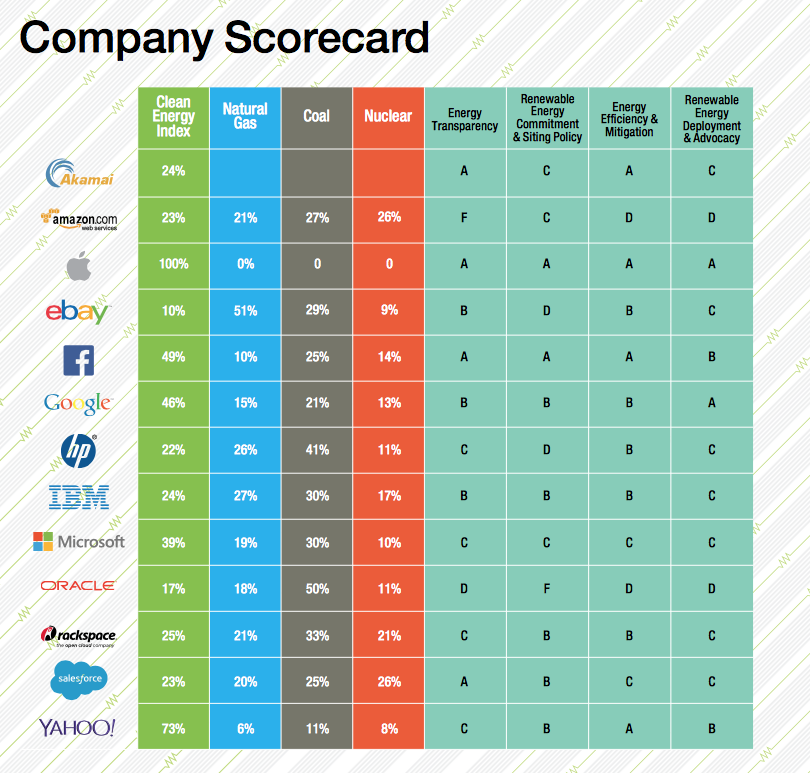 It shouldn’t come as a surprise that Apple scored well in Greenpeace’s report. The company has been very public in its push for clean energy, and in its latest Responsibility report, it notes that 100% of its US operations, 100% of its data centers and 87% of its global operations run on renewable energy.

Moreover, Apple recently announced that it has partnered with the World Wildlife Fund to manage one million acres of working forests which provide fiber for pulp, paper and wood products. “Forests, like energy, can be renewable resources,” said Lisa Jackson, Apple’s VP of Environmental Initiatives.

Things haven’t always been this way, however. Organizations like Greenpeace used to regularly criticize Apple over its lack of transparency and use of toxic chemicals. In fact, in 2007 Steve Jobs felt the need to pen a letter entitled “A Greener Apple,” outlining how the company would change its ways.