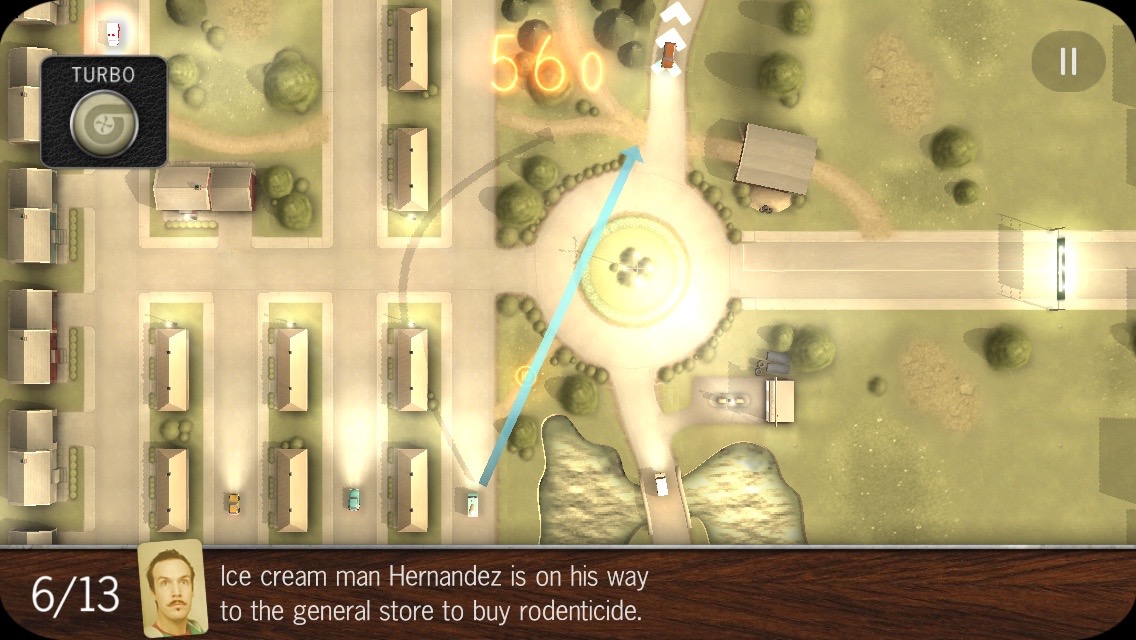 Driving in traffic can be one of the most stressful experiences of a person’s day. Navigating turns, freeway congestion, and distracted drivers can really put you off.

Does Not Commute takes the concept of daily driving and smashes it into a brick wall. After playing this game, you’ll appreciate the relaxing traffic jam you are stuck in every morning. We’ve got a game review of Does Not Commute for you today.

When you have 15 cars on the road, all weaving between buildings trying to get to their destination, things get a bit hairy.

The graphics have this mid-century, toy-like appearance. It reminds me, visually, of the iOS game Hitman Go. In the first round, Players drive through an idyllic 1970s neighborhood complete with streetlights and roundabouts. In each round, things change. You’ll drive down the streets of a tight grid city, travel through a fairground, and try to find your way around the seaside attractions.

Each car has an interesting backstory for the driver. As you get behind the wheel, you will learn more about the driver’s story. For example, why does garbage man Dwayne have a picture of Mrs. Beck in his wallet? And why does post woman Betty stop by Mr. Beck’s house on her way to work? You will learn the answers to these, and other questions as you unlock their stories through gameplay. 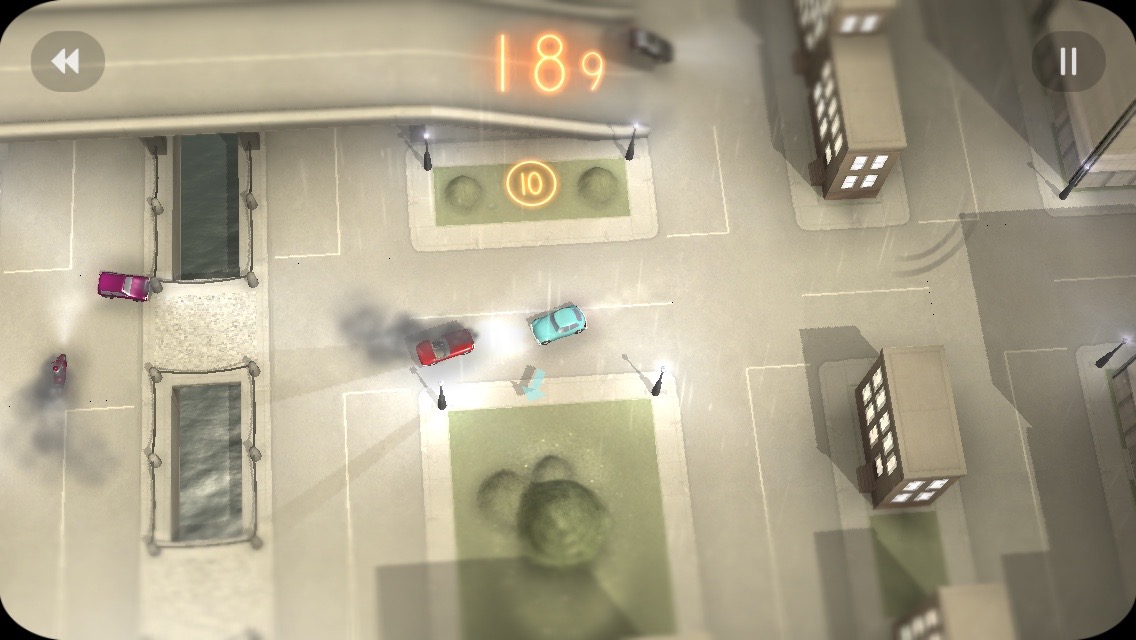 Players start off in the first car in the first location. So, you will begin with Dr. Charles Schneider leaving his house for work. All you have to do is get him down the street by using right or left button controls. It should only take you about five seconds, and the clock is ticking. Every moment you are driving, the 60-second clock goes down. That is, unless you grab a time extender bonus on your way to your destination.

After you complete the five-second trip with the first driver, you move onto the second. The first car you drove will also appear on this trip and drive the route you created on your first run. This happens over and over again for 13 cars in the first location. So, you have to remember where your previous cars were headed in order to avoid a collision in the future. If you do crash, your car will slow down, extending the time it takes to get to point B.

Once all 13 cars have made it to point B, you will reach a checkpoint. New content will start at this checkpoint for the second location. The round starts again with more cars, less space, and a few new characters. Each round of successful runs ends with a checkpoint and a new location. This goes on until you’ve completed the game.

If you mess up and crash a car, it might be best to rewind that car. You will receive a one-second penalty for rewinding, but that might be better than losing five seconds for having a crashed car that slows down.

The free version has no advertisements, but does not allow you to start a new game from the checkpoint. So, when you run out of time, you must start from the beginning again.

For $1.99, you can unlock the ability to start from a checkpoint, which is very helpful in getting to the next stage in the game since it is so difficult to make it through even the second location.

There is also a practice mode, which allows players to run through the city alone in a single vehicle in order to get used to the layout of the location. It is unlocked after a few levels and allows you to practice shaving off seconds of time on your morning commute. 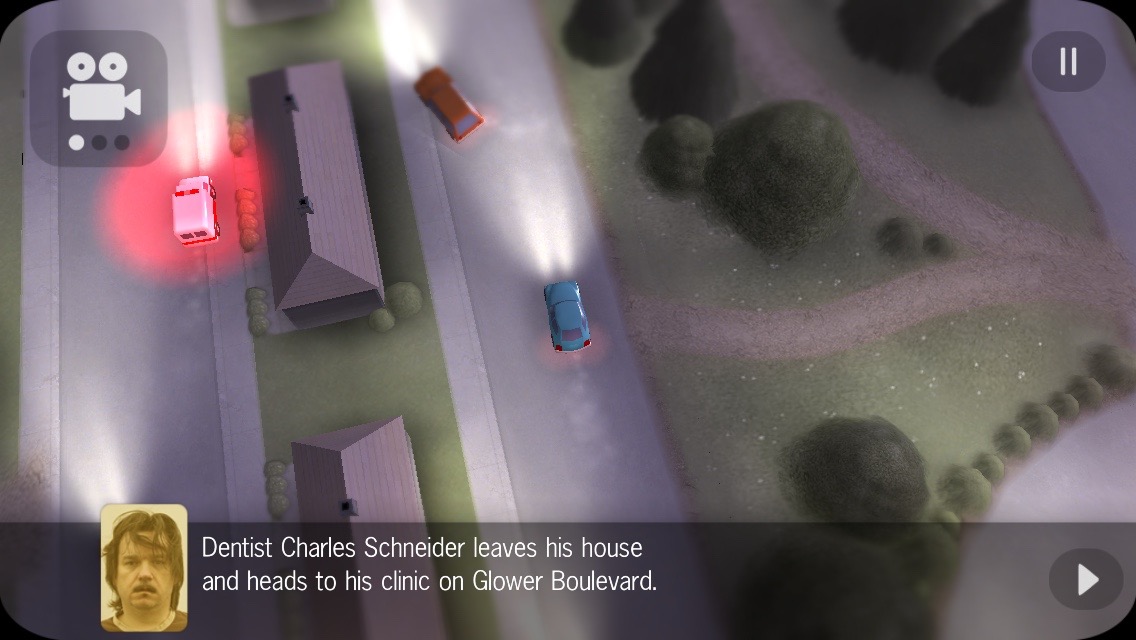 I love the stories that develop with each driver. It gives me a reason to try to complete the next round so I can sit in the car of a particular character with an interesting backstory. Why is the ice-cream man getting rodenticide?

I never had an issue with anything in this game. It plays smoothly and is humorous and fun.

Does Not Commute is free to download. If you are really good, you can play the entire game without needing to pay for the in-app purchase. The only additional content you get by unlocking the premium game is checkpoint saves. For players like me, who need all of the help they can get, the $1.99 premium price tag is worth it.

I definitely recommend trying this game. It is lots of fun and presents an interesting game play mechanic with an attractive graphic design. It is available on the iPhone, iPad, and iPod touch. Download it in the App Store today.

In a way, this is like one of Mediocre AB’s other games, Smash Hit, which has the same timed elements, but is about smashing glass instead of avoiding smashing cars.

What do you think of this timed driving game? Let us know in the comments below.