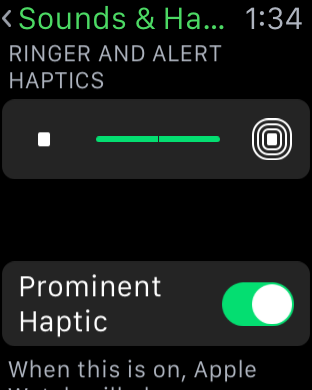 To alert you to certain notifications, Apple Watch will tap your wrist using its haptic feedback hardware, dubbed the Taptic Engine. These alerts feel like literal taps on the top of your wrist, and are much-diffrenet feeling than traditional vibrations.

How to change haptic intensity on Apple Watch

Step 3: Scroll down and adjust the Ringer and Alert Haptics slider

Step 2: Tap the My Watch Tab

Step 4: Adjust the Haptic Strength slider to your preferred level

In addition to the basic haptic settings, you’ll find a switch in both the Settings app on Apple Watch and inside the Apple Watch companion app for prominent haptic. The explanation provided is a little vague:

When this is on, Apple Watch will play a prominent haptic to pre-announce some common alerts.

This feature does what the description say; it sends a haptic pre-notification to alert you that an alert is about to arrive. If that sounds  bit redundant, it’s because it is. I guess this is for people that have a really hard time picking up on haptic notifications, even with the intensity maxed out.

What do you think about the haptic feedback found on the Apple Watch? Do you think it’s substantial enough?