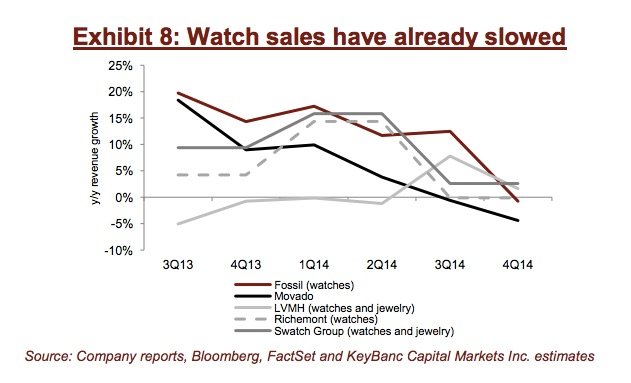 When Apple’s design chief Jonathan Ive opined ahead of the Apple Watch unveiling last year that Switzerland was in trouble, many commentators waved off the comment as pure marketing talk.

But surveys cited in today’s note by Key Banc researches clearly show that a much stronger-than-anticipated reception to the device may indeed give fashionable watch brands a pause.

The truth is, sales of traditional watches have already slowed as would-be buyers were holding off purchases in the wake of the Apple Watch’s arrival.

Apple’s device will be “highly disruptive” to the traditional fashion watch market, reads the note. “At a minimum, the widespread buzz may cause something of a standstill in the watch market.”

“We do not believe retailers in this case, and by our deduction, Fossil and Movado, have explicitly factored in any level of cannibalization,” it continues, noting that the level of disruption “could be significant”.

As a result of the successful Apple Watch launch, which went on a pre-order spree last Friday in the United States and several key markets around the world, the research firm has reduced its estimates for Fossil and Movado.

A home page takeover ad is worth a thousand one-sentence stories pic.twitter.com/Vi4ZDADDar

As opposed to the fashion watch industry’s significant growth in the 2010-2013 timeframes, sales have now slowed to low single-digit in 2014. Apple’s foray into the wearable market will only add “incremental pressure” on an already squeezed market.

“The Apple Watch could give rise to an industrywide contraction. This has some historical precedence; we note that the quartz crisis in the 1970s caused significant dislocation and contraction in the Swiss mechanical watch industry,” the research firm weighed. 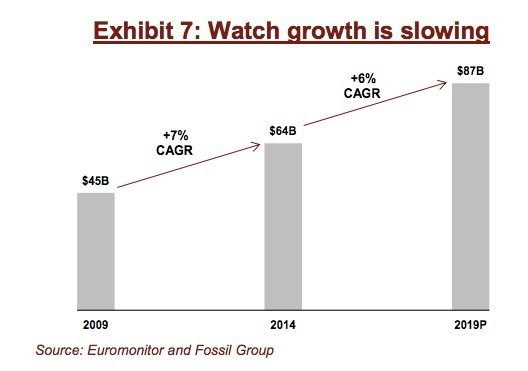 According to a survey by Slice Intelligence, Apple has collected more than one million pre-orders for the Watch in just 24 hours in the United States alone, all in the face of constrained supply.

Based on initial pre-orders, Apple will become one of the top three producers of >$200 watches in its first quarter of this year, said Key Banc analysts.

“In bragging about how cool he thought the iWatch was shaping up to be, he gleefully said Switzerland is in trouble.” The New York Times’ Nick Bilton paraphrased Apple’s Jony Ive last September, ahead of the official Watch unveiling.